Work starts on new recreational park next to Giralang shops 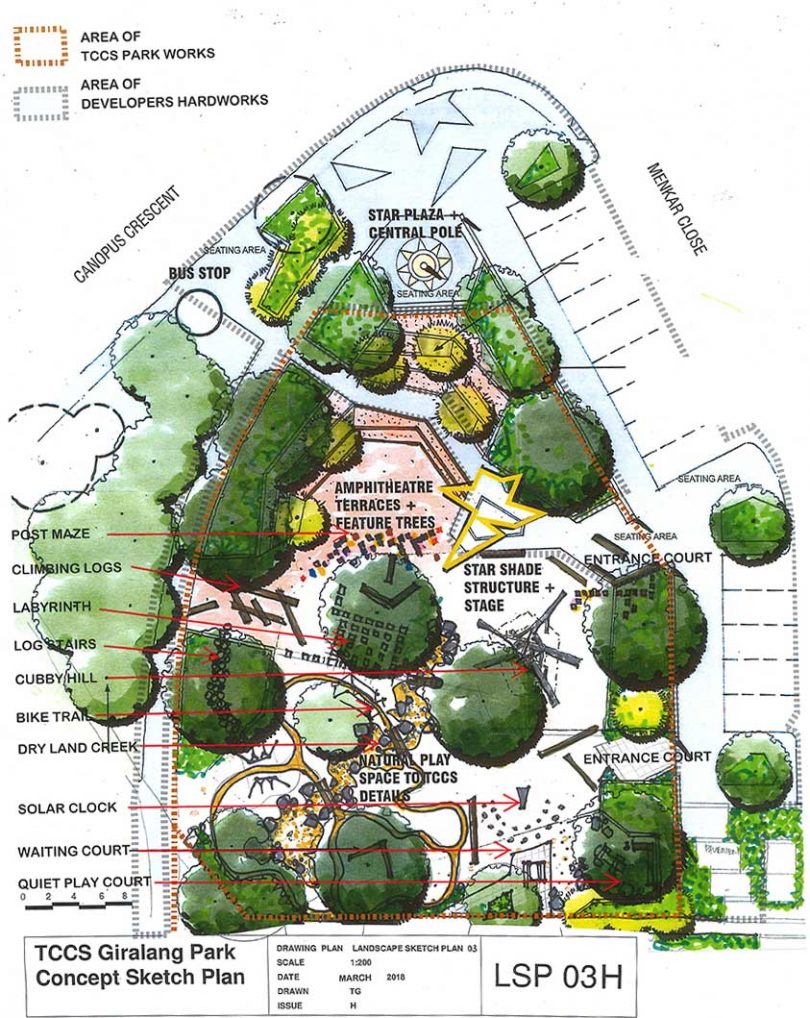 Timber from the old Tharwa Bridge will be incorporated into the new Giralang Community Park that will include a number of play areas for a range of ages including a small dirt bike trail, trees and other plantings, climbing logs, and a solar clock.

Work has started on the project, which is a collaboration between the ACT Government and the developers of the adjacent shopping centre.

Minister for Transport and City Services Meegan Fitzharris said that the new recreational area was an outcome of extensive community consultation in Giralang.

Following the restoration of the Tharwa Bridge in 2011, timber from the old bridge was retained and will be painted by Giralang children to form some key elements of the Park.

“We’re very excited to be able to inject some of Canberra’s heritage into the new public space. Tharwa Bridge is the oldest standing bridge in the ACT, first built in 1895. The timber will be reused and repurposed in the new Giralang Park, used as bench seats and retaining walls,” she said.

Construction on the ACT Government component of the park has begun, and will be completed by late 2018. Further works to be completed by the developer, including car parking, additional seating, shade structure, stage and landscaping, is subject to DA approval, and if approved will be delivered as part of the shopping centre redevelopment program in 2018-19.

Labor Member for Yerrabi Suzanne Orr, who was involved in the consultation process, said she was pleased to see work beginning on the new recreational area.

“I’m excited that construction on the Giralang Community Park has commenced and I’m confident the community will be pleased to see their ideas come to life as the park takes shape,” Ms Orr said.

“Since the ACT Government committed $100,000 in the 2017-18 Budget for the park, I’ve been speaking to Giralang residents to make sure the park’s design best reflects their views.

“I’d like to thank University of Canberra Landscape Architecture students, in particular Adam Barneveld, for their work in producing design concepts for the park.”

Kerry-anne Stafford - 36 minutes ago
I’m a mum of 7 and was made homeless last year. ACT housing had me in a holiday park in Watson where I had to pay $600 a we... View
Lauren Herbert - 1 hour ago
Lesli Cameron from the act: “The principal of security of tenure still underpins Housing ACT tenancies to a large extent. I... View
Lea Powell - 1 hour ago
Jenny McInnes sure, however, in my twenty plus years as a tenant, I have seen a lot and have experienced a lot too. I don’t... View
Sport 1

Kathleen Lee - 4 hours ago
What! They are historical buildings. Don't be so silly. View
Glenys Callaghan - 6 hours ago
I love these buildings, they represent Canberra to me. I hope they are never pulled down as they are part of Canberra’s his... View
Property 6

Anna Noces Gatdula - 8 hours ago
One of the most hard working I work with! Bless you barb😘 View
show more show less
*Results are based on activity within last 7 days

Canberrans under the age of 50 will be shepherded towards the Pfizer vaccine at the Garran vaccination hub instead of receiving...
Food & Wine 35

@The_RiotACT @The_RiotACT
Veteran organisations have welcomed the Federal Government's announcement that it will establish a Royal Commission into Defence and Veterans Suicide https://t.co/qpHIPzY1Vh (28 minutes ago)