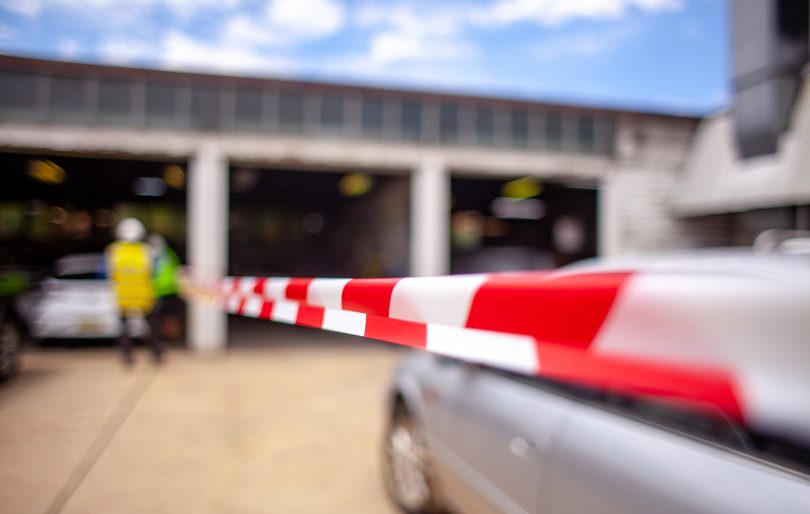 A construction site at 32 Mort Street, Braddon was cordoned off on January 30 after a concrete panel fell nearly 20 metres, crushing a small toilet block and a car parked nearby. Photos: George Tsotsos.

WorkSafe ACT inspectors will this week start targeted checks of construction sites installing pre-cast concrete panels following recent safety incidents such as the crushing of a small toilet block and a car in Braddon in late January.

Work Safety Commissioner Greg Jones said that concrete panels created off-site are being increasingly used on ACT construction sites but their installation is a high-risk activity with potentially serious consequences if a panel collapses.

He said that panels have fallen on sites in the ACT in the recent past and it has been very fortunate that they did not cause serious injury.

“The collapse of any concrete panel, even a small one, can have catastrophic consequences for workers or the public,” he said.

On January 30 this year, a 3.7-tonne concrete panel fell for nearly 20 metres at a construction site at 32 Mort Street, Braddon, crushing a small toilet block and a car parked nearby.

The panel had been temporarily installed at the site of the Yamaroshi apartment complex and was in the process of permanent fixing when it became dislodged and fell. Thankfully, no one was injured. 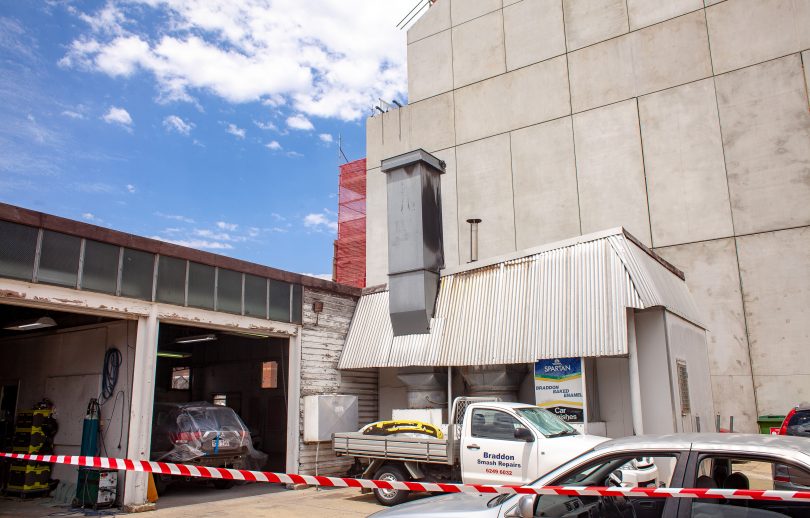 The cordoned off site where the 3.7 tonne concrete panel fell on January 30.

Mr Jones said WorkSafe ACT inspectors will be checking processes on sites involving precast panel installation. This will include checking safety design aspects and any modifications, installation, the removal of temporary supports and other potential safety risks.

“Pre-cast concrete panels, which have been created off-site and installed by crane, are an increasingly common building product across both residential and commercial development,” he said.

“The risk of panel collapse exists throughout the entire construction process, not only during the panel erection phase.

“The risk of collapse must be managed until the concrete panel is effectively part of the building’s permanent structure.”

Mr Jones said that he has recently sent a safety alert to local industry reminding them of the risk and the importance of Safe Work Method Statements for such activity.

“Erecting precast concrete panels, using mobile plant around the panels and altering or removing temporary bracing is always high-risk construction work and I’ve reminded industry of this as well as advising that this activity will be a key focus over the next few months.”

An engineering expert said on Radio National the other week that buyers need to be wary of buying apartments in blocks of more than three storeys, because construction standards are pretty much an unknown throughout Australia since self-regulation and a lapse in government oversight and scrutiny.

Hummmm, interesting.......I wonder if WorkSafe ACT will include the manufacturers of the precast concrete panels in their education program and audit, after all, don’t the manufactures have a ‘duty of care’ to ensure their products are sold with proper safety instructions for their use????

Will forward it to him.

Ray Ez - 3 minutes ago
It’s like they never saw it coming! Again! And again….and again… View
Linda Stapleton - 4 hours ago
Oh the poor souls mowed near our home only a couple of weeks ago and oh dear the grass is now two feet high already. I feel s... View
Sport 5

@The_RiotACT @The_RiotACT
This couple has the passion and all the skills required to undertake a sympathetic #renovation of one of Canberra's iconic mid-century modern #homes. We're looking forward to seeing the finished product https://t.co/bkM1mb6xvA (4 hours ago)