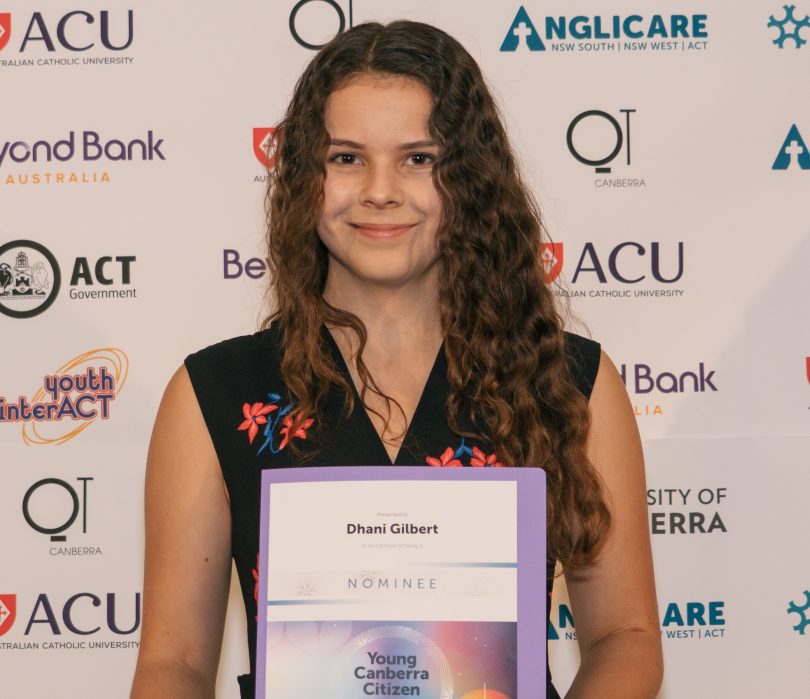 Indigenous woman Dhani Gilbert is committed to her community and the environment. Photo: Naomi Colley.

Indigenous woman Dhani Gilbert has won the 2018 Young Canberra Citizen of the Year Award for her community work, academic pursuits and advocacy for Aboriginal and Torres Strait Islander people.

A proud Wiradjuri woman, Ms Gilbert is an exceptional role model in our community who values her connection to country and is passionate about environmental science.

Ms Gilbert has participated and volunteered at many Aboriginal community events, the ACT Cancer Council’s Relay for Life event, and provided peer support to other young people who have had a family member diagnosed with cancer.

The Awards, now in its 29th year, recognise and celebrate the outstanding achievements of young people aged 12 to 25 years. Other category award winners include:

Ms Willis advocates for young people who identify as a member of the Lesbian, Gay, Bisexual, Transgender, Intersex and Queer community. She also works tirelessly to listen to the voices of children and young people involved in the care and protection systems.

Ms Diamond is the founder of Trash Mob, a clean-up initiative that aims to create a cleaner, greener environment for all Canberrans.

Jasiri Australia contributes to the ACT community through fundraising for children and women living in emergency accommodation, connecting marginalised young women to local politicians and developing skills-based programs to help women feel safe and secure in the community.

This year’s event sponsors are the Australian Catholic University, Anglicare, University of Canberra, Beyond Bank, QT Canberra and the Youth Advisory Council.

The Young Canberra Citizen of the Year Awards marked the official launch of ACT Youth Week, 13 to 22 April 2018.

Minister for Youth, Rachel Stephen-Smith congratulated all the winners and nominees of this year’s awards, saying it was an honour to attend the awards and meet so many young Canberrans achieving so much for our community.

“Ms Gilbert’s achievements reflect the incredible work, energy, and passion of the ACT’s young people. I have no doubt that Dhani will be a fantastic Young Canberra Citizen of the Year and will become a role model for even more people in our community,” she said.

“The Young Canberra Citizen of the Year Awards mark the start of ACT Youth Week and I encourage everyone to attend a local event celebrating and recognising our young people.”

Scott Bell - 1 hour ago
Ya all Dreaming tax man rules who gonna pay for the Friday’s View
Karen Feng - 5 hours ago
4-day work week. Those that meant 3 of those days are double pay. or does it meant we are paid one day less View
Bianca Rossetti - 5 hours ago
I prefer more flexibility options rather than stating 4 days working.. nsw are looking into school hours changing, maybe this... View
News 8

Maya123 - 3 hours ago
Added: I did some research on this. "Trees listed on the ACT Tree Register are protected. They cannot be cut down or altered... View
Maya123 - 4 hours ago
I wonder if being heritage listed gives extra protection to street trees, or not. View
ChrisinTurner - 6 hours ago
Unfortunately street trees are not covered by the Tree Protection Act as demonstrated around Civic recently. View
News 19

chewy14 - 5 hours ago
Ian Lindgren, Of course you are correct. But that won't stop people continuing their whinging that doesn't actually address a... View
Ian Lindgren - 8 hours ago
The AWM Redevelopment Project will go ahead and the two high level reasons that it will are that it is based on need, and tha... View
Food & Wine 29

Is Canberra’s Citizen of the Year Award in danger of losing relevance?

Meet the brothers representing Canberra at the Commonwealth Youth Parliament