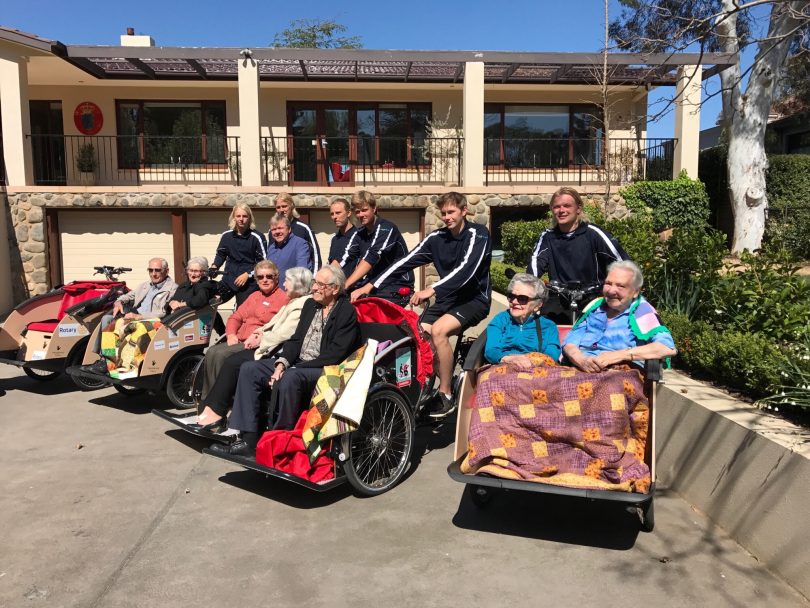 All aboard! Senior Canberrans are treated to a ride around town by Danish students for Cycling Without Age.

They are spreading the word about Cycling Without Age; a movement that started in Denmark and helps older people get out into the fresh air and feel the wind in their hair again.

“We wanted to try doing a gap year and travel, but in a different way to just going to a beach for two months,” said Kenneth, one of the Danish students.

“It’s a very normal part of Danish culture, to bike ever since you could walk,” he said.

Residents from Canberra nursing homes were given a very Danish experience in Yarralumla when the Danish Ambassador to Australia Tom Nørring welcomed them into his home with a morning tea after a bike ride with the young Danes.

“It’s our first bike ride in quite some time,” said Adrienne Capp, a fellow resident who accompanied Beryl to the morning tea. “It was lovely.”

Cycling Without Age started in Copenhagen in 2012 to help elderly Danes with limited mobility get back on their bicycles. Founder Ole Kassow started offering free rides on trishaws – basically a bicycle with a double seat in front – to local nursing home residents.

“If you go to a nursing home it doesn’t mean you don’t have the right to fresh air and good experiences,” said the Danish Ambassador Tom Nørring.

“We’re very impressed with the effort these guys are making in order to promote Cycling Without Age here in Australia,” said the Ambassador as he thanked the six Danish students for their enthusiasm and hard work.

“The movement started with just 5 trishaws, and has now spread to 30 countries,” he said. Cycling Without Age now has over 1000 trishaws and more than 6000 volunteer pilots worldwide.

They call themselves ‘Team Strib’, after the town in Denmark where they live. They aim to finish their trip in Hobart in mid-October.

Cycling Without Age was introduced in Australia in 2016, with the first chapter in Australia starting right here in Canberra at Kangara Waters in Belconnen. Interest continues to grow from communities across Australia.

In Canberra, the movement has been championed by cycling advocacy group Pedal Power ACT, along with the Danish Embassy and the University of Canberra. The group coordinates volunteers to pilot the trishaws, while community groups including Rotary and Lions raise funds for the bikes, and nursing homes facilitate opportunities to take the elderly on regular rides.

Would you give up your spare time (or even your gap year!) to help elderly Canberrans feel the wind in their hair again?

Find out more about Cycling Without Age and volunteer to help here.

Anne Treasure is the Communications Manager for Pedal Power ACT. She writes on bike riding in the ACT from the perspective of someone who rides mainly for transport.

Yes dungfungus, these trishaws fall within the Road Rules’ definition of a bicycle. They may be ridden anywhere that a two wheeled a bicycle may be ridden (as long as it can fit there). They have brakes on all three wheels (disc brakes included). Let’s not get into the helmet debate, but yes pilots do wear helmets – the lads in the photo have worn helmets all the while as they pedalled on roads and paths from Newcastle to where they are now in Bendigo. If you’d like to come for a spin, follow the link in the article.

I recalled the introduction of these “trishaws” late last year reported on here: https://the-riotact.com/danes-give-canberrans-freedom-to-cycle-without-age/189810.

Are these bicycle variants meant to be using designated bike lanes and shared paths or are they registered for road use exclusively? It also appears the pilots are exempted from wearing helmets. Surely there are different mechanical standards applying to these contraptions, especially the brakes. I wouldn’t feel comfortable sitting “upfront” on one of these on Canberra roads and paths.