Young women to experience life as politicians as #GirlsTakeover Parliament 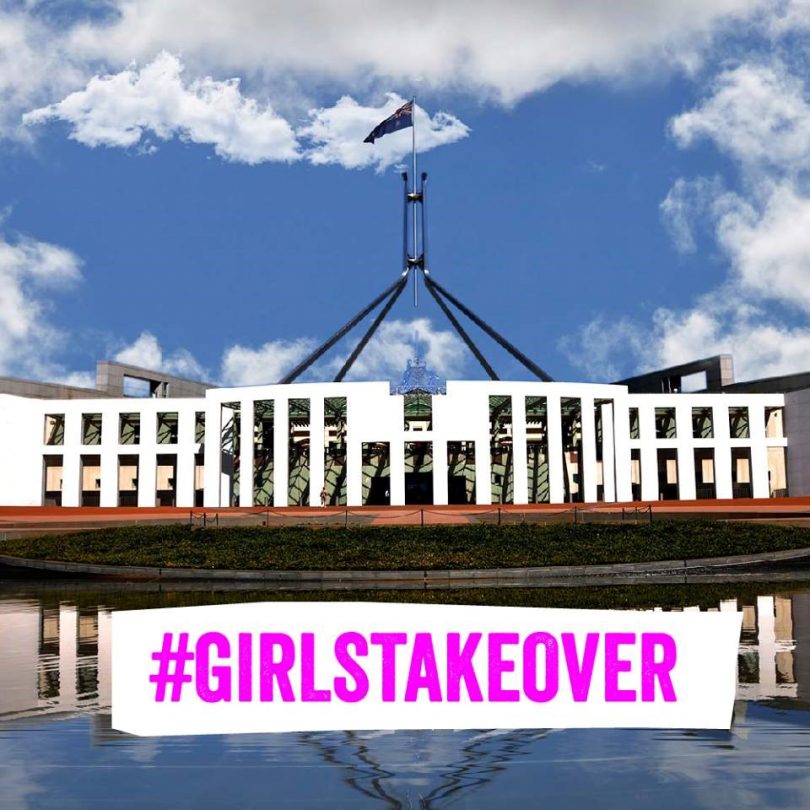 So often we hear that young people don’t care about politics. Often older citizens lament with comments like ‘they are tuned out’, ‘they are too cynical’ or ‘they are just too absorbed with social media to be involved’.

However, whenever I have even a brief encounter with young people I am amazed, inspired and excited by their passion, enthusiasm, and commitment to getting involved and influencing decision-making.

The latest example of the drive of young women is happening in just under a week when young women in Canberra participate in the #GirlsTakeover Parliament Program, part of Plan International’s global #GirlsTakeover initiative. As part of the commemoration of International Day of the Girl on 11 October 2017, 600 takeovers in 60 countries will take place across the world. Canberra will be one of the locations where this action is occurring.

This initiative is a bit cheeky – a mix between activism and professional development, with a hint of a demand – as these #GirlsTakeover and create a platform in a space they often have difficulty accessing.

On 11 October, young women will take over the offices of local representatives from across party lines, with participants including Nicole Lawder MLA, Yvette Berry MLA, Tara Cheyne MLA, Elizabeth Lee MLA and Caroline Le Couteur MLA. On 18 October, young women will enter Federal Parliament and occupy the offices of 19 Parliamentarians from every political party. During this time, the young women will shadow the politicians for the day and present these representatives with Plan International Australia’s national report on how to increase the participation of young women in political decision-making.

While in the ACT we have achieved a balance in gender representation, we have some way to go in Federal Parliament. Currently, in Australia, a mere 28.6% of federal politicians (43 out 150) are female, although women comprise of approximately 50% of the population.

There has been support for the program, with the overwhelming response coming from female politicians who appear much more attuned to the need to champion gender equity. There are however some male champions who will participate in the federal part of the program including Senator Simon Birmingham from the Liberal Party, Greens leader Senator Richard Di Natale, Hon Bill Shorten and Hon Andrew Leigh MP from the Labor Party and Senator Nick Xenophon and Senator Stirling Griff from the Nick Xenophon Team.

Having young women experience the life of a politician, even for a day, will inspire and challenge them. I suspect they will be teachers as well as students during this process, as they bring new ideas, question practices that make little sense today and demonstrate all they have to contribute to the art of politics.

I have argued that inclusion programs are important to respond to the reality that certain groups in our community are excluded from the benefits of our community. I also think there is an important place for activism, and the sharing of spaces with people who are often locked out of them. What do you think?

chewy14 - 18 minutes ago
The Federal Government has paid out hundreds of billions of dollars of support payments throughout the pandemic so to claim t... View
Opinion 64

nobody - 50 minutes ago
Yes, it can be a struggle to go from renting to buying, a really large hurdle for many, and still better than renting in the... View
phydeaux - 1 hour ago
Agree, chewy. Perhaps it is not a warm concern for the availability of rental properties that drives some investors but a fea... View
JS9 - 2 hours ago
In what world should a tenant have to provide a reason to leave? If they break during a fixed term contract they have require... View
News 1

chewy14 - 56 minutes ago
Once again the ACT government has been forced kicking and screaming into doing something they should have always been doing i... View
News 1

Brianna - 57 minutes ago
This is going to be a disaster for so many vulnerable people who live in the city and it's closer surrounds. I know for a fac... View
Business 10

Jaffa Groube - 2 hours ago
The govt has not made a case for lowering the speed in the first place and to do so on major thoroughfares like North borne A... View
jcjordan - 3 hours ago
Given the complete lack of care in the majority of drivers because they know that the likelihood of them being caught speedin... View
Steve Aust - 4 hours ago
Just avoid the CBD. Easy. View
News 41

@The_RiotACT @The_RiotACT
The #ACT - and all states and territories - desperately need help with soaring pandemic #health costs, says Member for Canberra @AliciaPayneMP. Why won't the #PM come to the party? https://t.co/1fKDHkCUKS (15 minutes ago)

@The_RiotACT @The_RiotACT
The ACT has recorded 24 new #cases of COVID-19 in the past 24 hours. There are currently 18 patients in ACT #hospitals with #COVID, including 10 in intensive care https://t.co/lw638QcjVh (20 minutes ago)