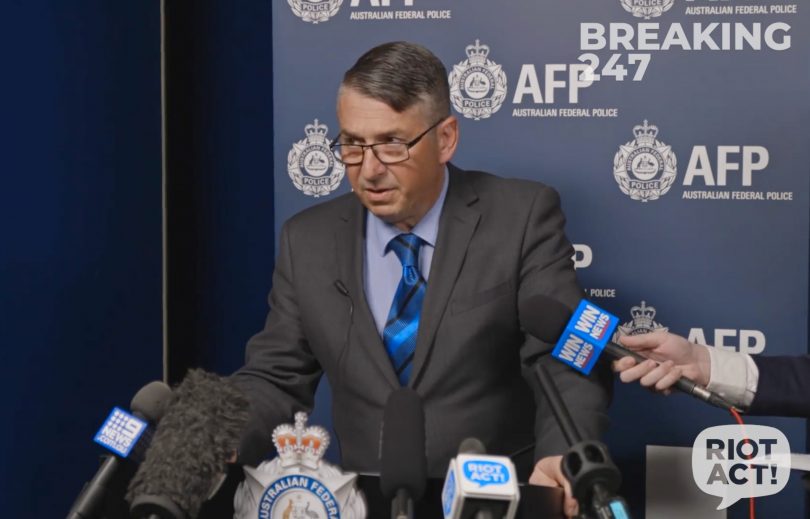 Detective Sergeant Hains said the summons was a significant milestone for Operation Athabasca.

A 25-year-old man has been summoned to court on 22 charges including attempted murder, forcible confinement and aggravated robbery in relation to a series of offences committed since he was a teenager.

The man was charged as part of Operation Athabasca, which saw police link 14 incidents – including 13 aggravated robberies – on licensed premises across the ACT since 2009.

A 25-year-old man has been summoned to court on 22 charges including attempted murder, forcible confinement and aggravated robbery in relation to a series of offences committed since he was a teenager.

The offenders in the aggravated robberies used guns, knives and modified nail guns across the 14 robberies, some of which had yielded the offenders more than $80,000. CCTV from the incidents released on 1 August shows two or three offenders but Detective Station Sergeant Harry Hains said officers were not sure how many people were involved and expects further arrest and charges to be made.

“It’s clear from the videos and appeals we have released that there was more than one alleged offender,” Detective Sergeant Hains said. “I am not ruling out laying further charges against any persons at this moment – in fact, we would hope to lay more charges.”

Detective Sergeant Hains said the summons was a significant milestone for Operation Athabasca, which is ongoing and will continue to target other offenders in this series of events. He thanked the public for their assistance and said the public’s help was a significant factor to the success of the operation.

“I want to take this opportunity to acknowledge the courage of the victims, for their assistance and despite still recovering from these traumatic events, they have been with us all the way,” he said.

“The victims suffered from both physical and mental injuries as a result of these violent offences.

“You have our ongoing support.”

Detective Sergeant Hains said the success of this operation served as a reminder to anyone who commits a serious crime that it doesn’t matter whether it is “one day or ten years after the event”, ACT Police will keep looking for those responsible.

“There are further people that we want to talk to and I hope they’re watching,” he said. “My detectives are looking forward to meeting with you.”

The 25-year-old will face the ACT Magistrates Court on September 26 on 22 charges including:

Operation Athabasca is ongoing, and Police urge anyone who may have any information that could assist police to contact Crime Stoppers on 1800 333 000, or via the Crime Stoppers ACT website

Danny O'Donnell - 4 hours ago
Lynda Bailey Daniel would have that tucked away 💵💵😜... View
Opinion 19

A_Cog - 8 hours ago
The ACT Labor Government's terrible performance running core services like Health is what SHOULD matter in elections, but in... View
Best of Canberra 29

maxblues - 9 hours ago
South Australia recently banned the use of political corflutes for future elections., not just because of the visual pollutio... View
I am a Rabbit™ - 10 hours ago
The Greens classify as a minor party but don't seem to believe that spreading the equivalent of spam everywhere is a fair res... View
steve2020 - 19 hours ago
The problem I find with corflutes and other political advertising is that it can be a bit overboard, with the same signs over... View
News 5

ny4231 - 11 hours ago
This proposed apartment is built right to the edge of the block and is not set back at all. It is not difficult to find a pla... View
Sport 1

Stephen Saunders - 12 hours ago
What I thought. Somebody send him a soft-toy koala. View
ACT Election 2

Nudist - 12 hours ago
L an excellent summation of the current state of play in the Gungarlin electorate. I’ve had involvement with Peter on at le... View
Fiona Carrick - 20 hours ago
Hi Peter We are singing from the same song sheet. It is time the Government looked after our Town Centres! The Woden Town Cen... View
Community 8

@The_RiotACT @The_RiotACT
Gyms have never been cleaner and demand is surging, but COVID-19 restrictions are making life tough for fitness operators across the ACT. It's even worse if you're across the border in NSW https://t.co/QVfKUjEb4s (44 minutes ago)