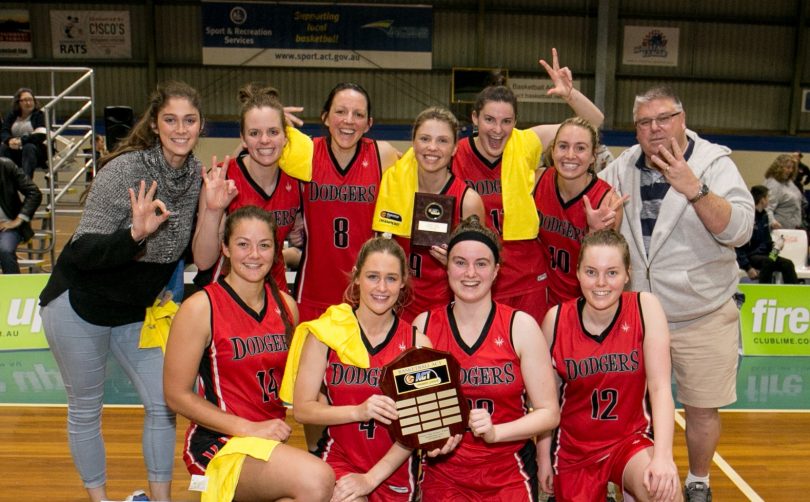 Rob Parker still remembers waiting with girls from his Under-14’s team after trainings. It was one of many little things he did to ensure his players knew they were safe at basketball.

These days, he still finds himself asking his Woden Weston Creek Dodgers Premier 1 Women’s side if they are right for a ride home.

“They say, ‘I’ve been driving for five years, Rob!’” he tells me with a laugh. “I’ve watched them grow up.”

In mid September, Dodgers won their third consecutive Premier 1 Women’s title – their fourth in five years. In a league that sees constant player movement between clubs, it was a reminder that consistency reaps rewards. This Dodgers side boasts a core of players who have risen through the ranks together and played Premier League hoops under coach Parker for close to a decade.

Canberra Capitals Academy captain, Sarah McAppion, is one of the women who have grown up with Parker at the helm. The 27-year-old former WNBL player first donned a Dodgers jersey 22 years ago and hasn’t switched since.

McAppion is now one of the core cogs in a seamless system, where passes are thrown to spots she knows her teammates will fill, and defensive pressure is applied knowing help is just metres away.

“We all know each other’s strengths and weakness,” she says. “We support each other really well and are involved in each other’s lives outside of basketball.”

McAppion says another strength of the program is Parker’s emphasis on filtering players up from Premier 2 – which he also coaches, resulting in constant experience throughout the club’s ranks.

“Rob’s style of coaching lets us all have a say in timeouts,” she continues, “which makes us all accountable for our mistakes or triumphs.”

“These grand final wins are always the sweetest,” says McAppion. “I have grown up with these girls and I’m immensely proud of my club.”

Twenty five years ago, Parker was just another parent who got into coaching for his kids. He moved on to a few other junior teams, but never intended making the leap to seniors. He simply took the reigns temporarily one season when the team was without a coach.

“Sixteen years in my temporary role,” he says laughing. “I was coaching juniors at the time and I filled in for three months until they found someone else… And I’m still there.”

“I’m really big on club loyalty,” he adds. “I’ve actually played for that club since high school. Never been involved with any other club and am very unlikely to do so. I’m a bit old fashioned like that.”

Family bonds, life-long friendships, and the youthful enthusiasm of his players have kept Parker coming back to his Premier League teams.

“I played footy with Sarah’s dad,” he says. “I know Kristen Langhorn’s dad from years ago when he played a bit of basketball. In Canberra you come across things like that. You just know these people from years ago. They’ve always been happy to trust me with their kids and fortunately it’s all worked out pretty well.”

TheSilver - 52 minutes ago
There is literally no good evidence that "social distancing" or "wearing masks" can reducing risk. At best you can say we don... View
phydeaux - 2 hours ago
Quite so. To put some rough numbers on it, 2017 was a peak flu season in which near 1200 people died, but the 4-year average... View
chewy14 - 2 hours ago
Can't remember when anyone said anything about compulsory flu booster shots? We are talking about Corona Virus, which is sign... View
Community 1

@the_riotact @The_RiotACT
#Gungahlin's proposed #tennis centre is a step closer with a consultant hired to come up with a preferred design for the facility https://t.co/7htQ6Obh5D (55 minutes ago)