Let us take your development
to the next level.
5 August 2022 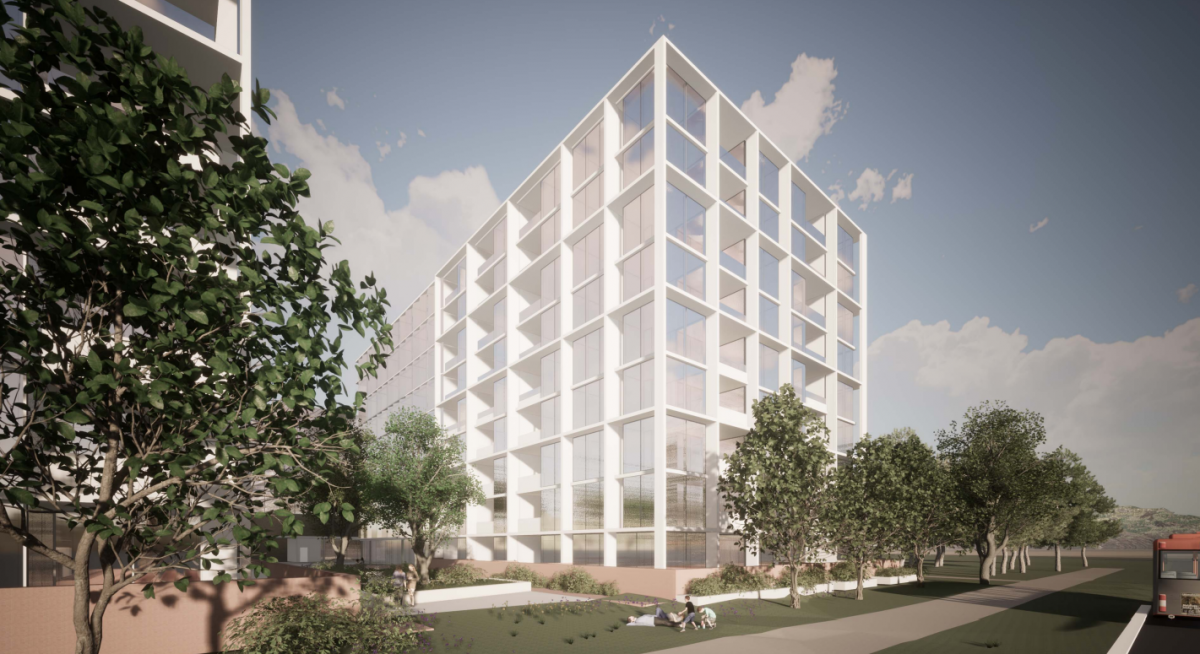 Canberra developer JWLand has lodged plans for a multi-building, mixed-use development that will include two hotels on the former public housing land sitting between Haig Park and the Rex Hotel in Braddon.

The $158 million Braddon Place proposal will add 602 units and 239 hotel rooms to the inner north, as well as restaurants and commercial tenancies.

JWLand says the vision for the site is for a series of buildings organised around a central green spine, linking Haig Park in the south with the Rex Hotel’s heritage-listed ‘Expansion’ mural to the north. 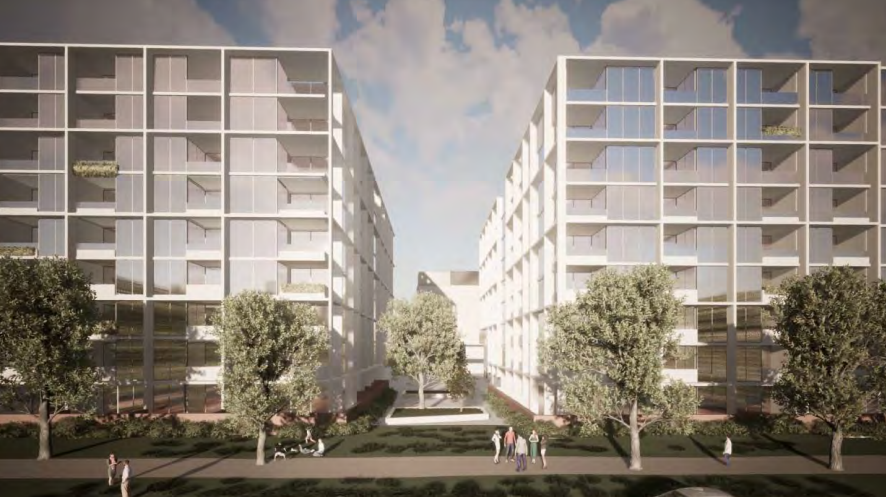 The DA says the development will include landscaped gardens with deep soil plantings, two pedestrian-only links between the blocks from Northbourne to Henty Street, and gated communal courtyards in two of the bigger buildings.

The development aims to achieve more than 30 per cent tree canopy cover.

Most of the trees and climbing plants will be deciduous to provide summer shade to combat the heat island effect and winter sun.

A cycle link is provided in the shared zone/path to the south of the blocks along Haig Park.

The eight-metre setback from Haig Park has been increased to 10 metres on the recommendation of the Design Review Panel.

Vehicle access to the development will be from Henty Street via an internal two-way laneway that heads north to an exit back onto Henty Street and an additional shared laneway to Northbourne Avenue.

Basement parking will be via an internal laneway and will be accessible from Building 1 (for residents) and Building 3 (for hotel guests).

The DA says providing basement parking access off Henty Street from the laneway will ensure local traffic flow won’t be interrupted by those entering and exiting the car park. 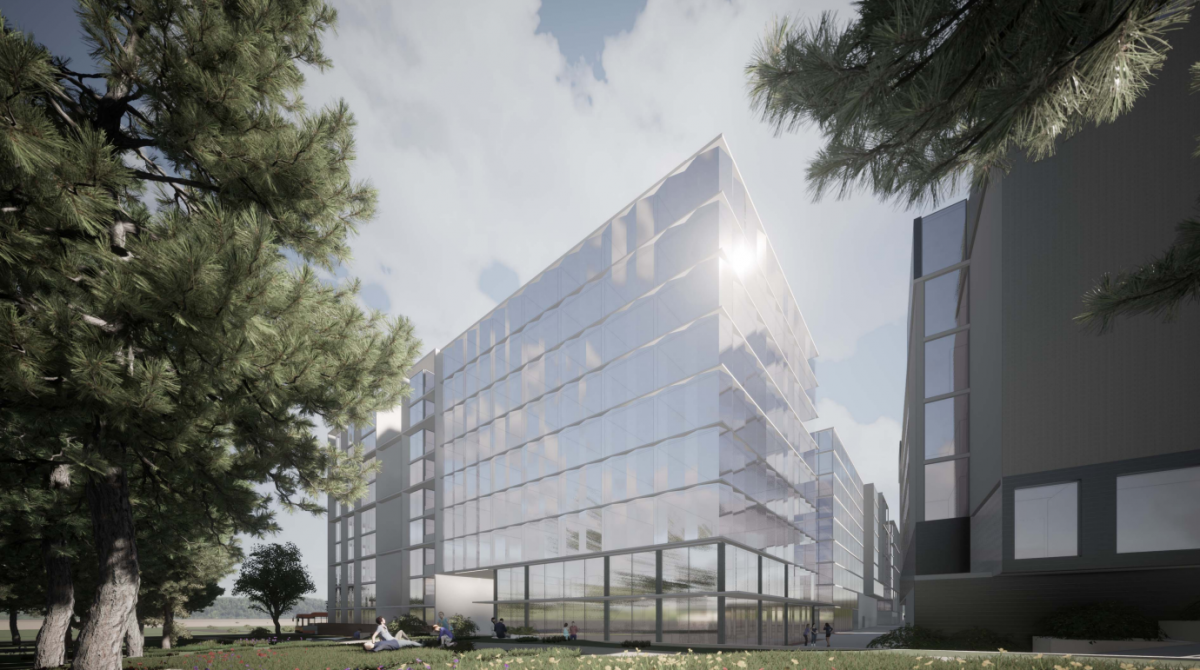 The view from Haig Park.

All services will be restricted to using the Henty Street entry and exit, and service vehicles will not be permitted to turn left onto Northbourne Avenue.

Services for the entire proposal have been placed within the centre of the site, which the DA says largely removes loading/unloading, internal vehicle movements, waste management/storage and other services from the public realm.

The DA’s traffic report says the proposed development will generate 266 movements in the AM peak and 287 in PM peak times.

In traffic simulations, the post-development scenarios lead to a minor deterioration in operating conditions, but the report notes the contribution of traffic volumes from the development is minor compared with those on the existing road network.

But the report recommends that the development controls the Northbourne Avenue egress during AM peak period to ensure the free flow of outbound traffic onto Henty Street.

Completion is expected in 2027.

Comments on the DA close on 22 August.

They will be able to plug in & recharge their electric vehicles.

Don’t mind the concept and seems like an okay location for the density. But what value are the design review panel adding when these ordinary designs fly straight through… 🤔

Town planning must be on the take. All the apartment buildings in Tuggeranong is making the place look ugly (Greenway in particular.) The traffic there will be an absolute nightmare.

Greg Marsh agree, it’s not as nice as it used to be. Same thing over at Weston in the new suburbs – concrete blocks.

What about those apartments opposite Bunnings? What a magnificent vista they have, at least on one side – the Bunnings carpark!

The very reason why canberra as city is, not being beautified but built on for profit. Developers who don’t give to the community but take from it. It’s a disgrace – it’s not architecture – it’s a crime and the governing bodies are allowing this to happen – to the future generations. Who appreciates these buildings???

The very reason why canberra as city is, not being beautified but built on for profit. Developers who don’t give to the community but take from it. Disgraceful, to current canberrans and future generations.

Can’t have gas but can use concrete, aluminium, glass and steel. Mmmm 🙁

Peter Brady Can’t have gas because they want to use renewables instead.

What are they going to replace concrete, aluminium, glass and steel with, to create less emmissions?

Simon Wheaton Exactly my question. But it is ok to buy the finished products from another country because the emissions are not made by Australia. Bloody hypocrites. 🙁

Isn’t this a bit of over kill. What’s with all these apartment buildings???

These apartments are for the people who will never own a hone with a backyard. Wether they want it or not

Surely, they should be mentioning how many ev charging bays these places will have.

Jarred Downey They indicate charging bays at street level on the plans, but it doesn’t mention how many.

Valuable addition to the housing market for sure. Why on earth does it need so many car spaces when it has light rail at the door?

Car spaces .. Because maybe .. just maybe, tenants may want to travel somewhere light rail doesn’t. Which is a lot of Canberra – oh and the rest of Australia.

Bill Gemmell because n9t all jobs are on the light rail corridor. People need to work

Belinda Lowe plenty of apartments in the other town centres nowadays.

Belinda Lowe same comment applies, except they are already built. The additional space/cost of the car park to store unused or underutilised cars is absurd. Surely this new complex doesn’t need that many spaces?

Bill Gemmell I’m no expert in planning laws and recommendations, but if you look at # units or # bedrooms, surely there’s a reasonable ratio.

Bill Gemmell pretty sure they want to go further than the end of Northbourne, or to Gungahlin.

Bill Gemmell 908 parking spaces for 840 units (241 non-residential and 599 residential) across the 6 buildings, possibly accounts for 1 parking space per unit, plus some extra for staff/visitors.

How many will be for young, low income first home buyers to get into the market?

Another gap between Barr’s had and rottenbury.

No more. Leave us some green spaces

Jan Gulliver it is right next to a park than spans 2 suburbs. We need additional homes, not additional green space in the inner north.

Bam Bam well it makes perfect sense. It’s the main thoroughfare into canberra. Far better than crappy urban sprawl that we currently have

Marcus who needs housing when we could have empty lots instead!?

Joey Mann NIMBY canberrans complaining about sensible density in civic and the inner north, not realising the alternative is, like, cutting down Kowen forest and putting in crappy cookie cutter urban sprawl.

Which one is more sustainable lol

Божана Крстеска agree. And I don’t love the exterior design, but on the whole, the Campbell 5 development (same developer as this article, JW Land) seems to be not too bad.

Божана Крстеска I think that’s a lot of apartments these days… I don’t think it’s some sort of conspiracy.

Marcus Harrington ha ha… It’s a shame I can’t buy myself an apartment in Singapore.

Man. Are they really getting people to buy these?

Nicky Goose they usually sell nearly all of them before even turning a sod.

Kimberley Lloyd welcome to the People’s Republic of Canberra

Kimberley Lloyd it’s only for a bit and reasonable unless people feel that it’s OK to tailgate or break the speed limit, when in the right lane.

Malcolm Campbell why would it be excellent?

Chris Thomson PRC. Get it.

Ugly buildings. Is it really to much to expect that some thought process goes into building designs of an interesting nature of which blends with the cities mountains, nature and greenery, such as the buildings of New Acton?