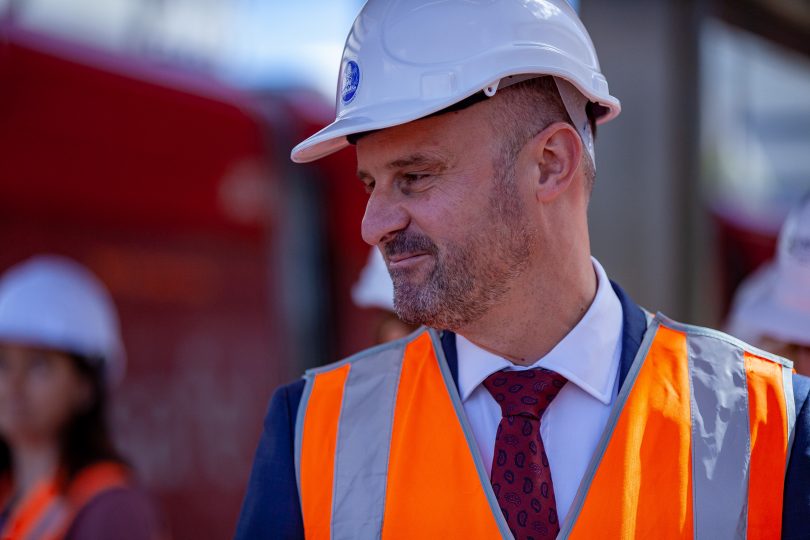 Chief Minister Andrew Barr: the hard hat and high-viz will stay a vital part of his wardrobe. Photo: George Tsotsos.

One can only imagine how crestfallen Chief Minister Andrew Barr would have been on election night. As an ACT Treasurer licking his lips at the prospect of having a Federal Labor Government that had promised a sackful of cash to a growing Territory, the blood must have drained from his face as the count progressed.

The $200 million for light rail stage 2 was only part of what he calls a stark difference in offerings from the major parties. The ACT was now going to come up with more of its own cash for schools and hospitals, and with the Territory population increasing at 8000 new residents a year or 2 per cent, faster than any other jurisdiction in the country, services and infrastructure would have to keep up.

This is the balancing act Mr Barr faces tomorrow when he delivers this year’s Budget reframed post-election to account for a shortfall in Commonwealth monies and an indifferent Federal Government.

He says there will still be a surplus ($45 million), the second in a row, and the economy remains in good health but there are pressures and the ACT will have to pay its own way with more infrastructure spending.

The Government is prepared to use the Budget to ensure the continuity of infrastructure and provision of services, he says.

Although he may not have a fetish for staying in the black, the plan is for the ACT over the medium term to do just that with no significant deficits.

So how will he do it?

Booming employment means payroll tax is up but a softer housing market means that source of revenue isn’t as healthy.

There have been big pay days with asset sales such the former public housing sites in Griffith, Narrabundah and Lyons but the key Northbourne Flats sites failed to sell, with the preferred tenderer not being able to meet the Government’s price.

The Government may bring forward asset or land sales to boost revenue, at the same time meeting the hunger for housing sites and affordable housing, as well as borrowing more, especially with the commitment to light rail Stage 2.

The proposed lakeside West Basin development, which might yield 2000 apartments, and the City to the Lake concept could be the cashcow the Government needs. No wonder it is also eyeing the Exhibition Park site in Mitchell as a prospect as well.

Don’t expect to see rates relief, with the Government’s tax reforms doing the job of ensuring a reliable income stream to pay for the services Canberrans expect. One of the things to watch will be just how much rates will go up in your particular neck of the woods.

For Mr Barr, the ACT has no choice but to keep pace with its greater-than-expected growth, which means we will reach half a million people sooner than thought, putting pressure on all our service sectors.

He may talk about pitching for more Federal money for the likes of the Canberra Hospital expansion, but Mr Barr is not getting his hopes up. The rest of Australia expects us to pay our own way.

Keeping the construction boom going is as good a way as any to do that. The cranes dotted across the town centres and the urban renewal in our inner suburbs are changing the face of the capital. Expect that to continue for a long while yet.

What’s the odds that Mr Barr once again ignores Tuggeranong in the ACT budget in comparison to his pet areas and his own inner north electorate?

The ACT budget is focused on putting money into the parts of Canberra that will get them re-elected at the next ACT election.

Even Labor Party insiders admit that ignoring Tuggeranong is part of their proven election winning strategy.

Shane Westmore - 1 hour ago
Absolutely. There’s people voting now who are completely misinformed about anything going on in this country & waste their... View
Nada Krstin - 4 hours ago
oops, meant to say, cannot have it one way! :)... View
Nada Krstin - 4 hours ago
No. And if you think they are mature enough to vote at 16 or 17, then they should be tried for any crimes as adults as well,... View
Opinion 94