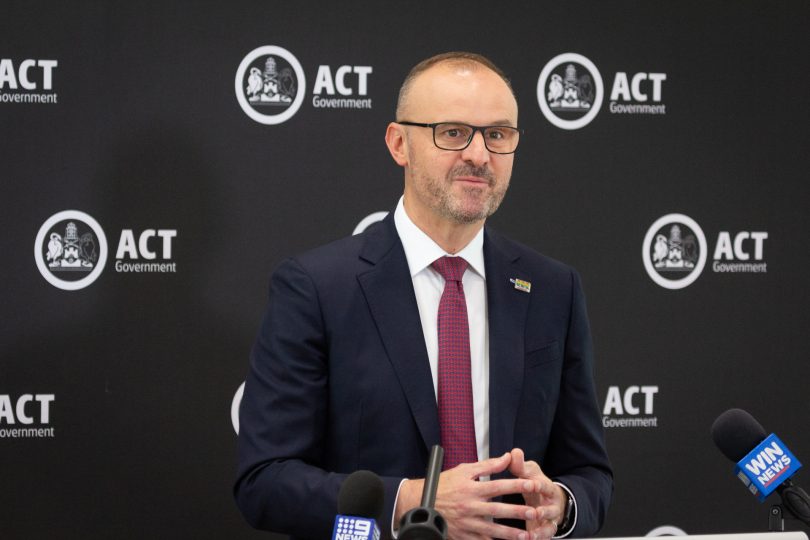 The ACT faces a long period deep in the red despite the ACT Government’s delayed Budget for 2020-21 showing a better than expected bottom line but big deficits, albeit reducing, stretching out to 2023-24.

But Chief Minister and Treasurer Andrew Barr believes this is manageable and that the ACT is in a much stronger position than other jurisdictions that have also had to go into the red, touting the Territory’s AAA credit rating, the only one in the country, and strong balance sheet.

While he would always work to improve the ACT’s bottom line, returning to surplus was not a goal in itself

”I would not go through the exercise of cutting hundreds of millions of dollars of expenditure and sacking hundreds of people for the sake of a surplus in any given year,” he said.

The Budget papers say the improved fiscal situation largely reflects a more positive economic outlook in the ACT and nationally, driven by strong land sales forecasts and greater GST payments from the Commonwealth.

Total revenue in 2020-21 is expected to be $401 million higher than forecast in the August 2020 economic and fiscal update and $960.7 million higher over the four years to 2023-24, aided by an increase in GST revenue of $76.9 million ($338 million over four years) due to a bigger GST pool driven by a sharp rebound in household consumption nationally.

After a rates breather for many homeowners in 2020-21 due to the $150 rebate, they will again increase over the forward estimates as part of the government’s tax reform program.

Mr Barr said that the heavy lifting had been done and the next phase would mean an average 3.75 per cent increase a year to 2023-24, but he held out the possibility of a further rebate in the next budget.

Hanging over the economy is the spectre of COVID-19, and the Budget assumptions are based on a successful vaccine roll-out, no major COVID-19 outbreaks and international borders re-opening by July.

While cautious about unknowns related to the virus, Mr Barr is confident the ACT will make a strong economic recovery.

Most of the government’s pandemic supports will be phased out as the COVID-19 situation and economy improve, with increasingly targeted funding going to areas that remain in need.

Mr Barr said the government’s focus was on jobs and his goal was to see unemployment return to pre-pandemic levels, below 3 per cent.

Supporting this is a long pipeline of public and private infrastructure projects, but the Budget papers warn of possible skill shortages due to the closure of international borders and Mr Barr said there was also strong competition from other states’ own infrastructure programs.

Mr Barr hoped international borders would open progressively from July this year, and that international students could return to Canberra by Semester 2.

He also called on the Commonwealth to do more to support the higher education sector.

Asked whether the Budget lacked ambition and could the government have boosted its spending on public and social housing even more, Mr Barr said the Territory was constrained by the parameters of its AAA credit rating and more significantly by what resources were available to deliver projects.

”My biggest concerns are not the financing but the supply-side capability to actually build the houses, land availability and planning challenges,” he said. ”Any new public housing almost anywhere in Canberra attracts a degree of concern from sections of the community and often a media circus.

”We can be very ambitious on paper but delivery is also important.”

Most of the government’s significant spending initiatives were announced pre-budget.

The Budget allocated $914 million to the Infrastructure Investment Program, which will amount to $4.3 billion over the four years to 2023-24.

Mr Barr’s next budget, for 2021-22, is only six months away. It is scheduled to be delivered in August.