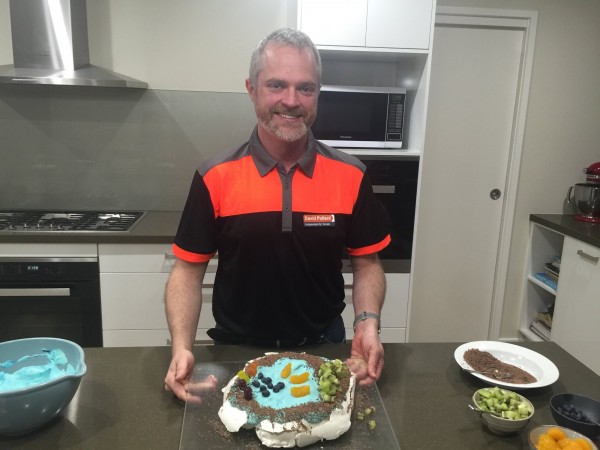 David Pollard is one of those warm, enthusiastic and hard-working people who seem genuinely keen to make a difference in their community, which probably explains why Labor MLA Meegan Fitzharris gave him a special mention in her final speech of the last Legislative Assembly.

“I would like to acknowledge the work that I have done with many people from the Gungahlin community over the last 18 months …[including] Dave from Crace Community Association, who has very bravely put up his hand to run as an independent in Yerrabi. I wish him all the best. If there is going to be an independent elected to this place, I hope it is someone like Dave Pollard,” Ms Fitzharris said.

Mr Pollard calls his very creative bake-off entry “Back to basics with the flavour of Yerrabi”. It’s essentially a pavlova decorated to look like Yerrabi Ponds, a favourite spot where Mr Pollard and his young family regularly relax at the playground, under the shade sails or at the BBQ.

They often wander down to feed the ducks after coffee or a meal at local cafe/restaurant Da Nunzio.

“There’s always people, there’s people bustling all over Gungahlin, and that’s one of the things I love about it here,” he says.

“When we first moved to the area and started going to Da Nunzio’s, they really welcomed us in, treated us like locals from the start, which always made us come back.”

The software engineer says that when the family celebrated their little girl’s birthday at the restaurant, Nunzio took her into the kitchen and cooked Nutella crepes for her.

Mr Pollard says he’s calling his RiotACT bake-off creation back to basics because that’s what he wants from the government.

“I think a cross-bench helps the government get the basics right.”

The pavlova was originally in the shape of Yerrabi, but had crumbled a little by the time we arrived. Happily, I can report that this made no difference to the taste, which was as good as any pav I’ve experienced, and sooooo much better than a shop-bought variety. It could have something to do with the fact that the eggs were freshly laid by chickens who live next door to Mr Pollard’s parents in Kaleen.

Having grown up in Kaleen and attended Catholic schools including St Michael’s and Daramalan, Mr Pollard went on to study software engineering at the University of Canberra.

The Pollards now live in Crace, in that rare find in Gungahlin: a home with a decent-sized yard. They planned it that way, and the children, aged 16 months and almost 5, are already benefiting.

Mr Pollard, who works in his family’s longstanding IT business, CompuCraft, is the president of the Crace Community Association and a former treasurer of the Gungahlin Community Council. His focus on first getting involved was in providing opportunities for residents to get together in their home suburb for events like film nights, stargazing events and Christmas parties, but grew to involve liaising with government to lobby for better amenities and infrastructure.

He has enjoyed the entire experience so much, he is considering a career change to something involving work like it.

One of Mr Pollard’s campaign focuses is planning, and in particular roads. He notes that the duplication of Horse Park Drive was announced only 14 months after the arterial road was first completed.

Another is education. He’d like to see Gold Creek School continue through to Year 12, giving students currently enrolled in the International Baccalaureate program there the option of finishing their schooling close to home rather than commuting across town to Narrabundah College or Melba Copland Secondary School.

Mr Pollard is one of the few independent candidates who agrees with Labor and the Greens on the light rail project. He says most people in Yerrabi want to see the light rail network built. The population is booming in Gungahlin, with some schools already overflowing.

He says there are 17 year one classes at Harrison Primary, and so many students at Gungahlin College that the staff and students have agreed to classes running up until 8pm one day a week.

The campaign has been interesting, rewarding, challenging, enjoyable, and so much more. There have been a few opportunities to take a break from the letterboxing and public speaking, and this was one of the good ones.

If anyone has any questions for me here, fire away.

Colette Robinson - 26 minutes ago
As both a pedestrian and cyclist on shared paths, I am so sick of the arrogance, double standards and behaviour of certain cy... View
Peter Major - 26 minutes ago
get then off the road would be progress View
Aleksandar Vujić - 2 hours ago
Anthony Olivera gives cyclists somewhere to ride so they don't share the footpath with people, wont give motoring enthusiasts... View
News 1

@The_RiotACT @The_RiotACT
Multicultural Eats: Where to find the best Indonesian food in Canberra https://t.co/v5lPRYRs5P (59 minutes ago)