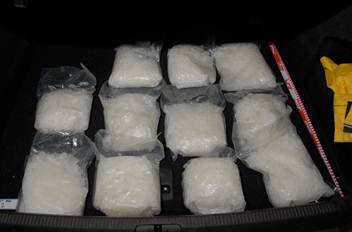 ACT Policing seized approximately 28 kilograms of a substance suspected to be methylamphetamine during the search of a vehicle in Curtin yesterday (October 23).

The search was conducted under a Drugs of Dependence Act (DODA) search warrant as part of a long-running ACT Drugs and Organised Crime Team investigation, Operation Davos, targeting a criminal syndicate involved in the distribution of cocaine in the ACT and interstate.

About 1.30pm yesterday (October 23), police intercepted a male driving a VW Passat sedan after he was seen to attend a residential address in Curtin, ACT. The vehicle was then subject to the DODA search warrant and forensically examined. Police located 28kg of a substance suspected to be methylamphetamine was located within the boot and hidden within the bodywork of the vehicle. The vehicle was also seized by police.

Five subsequent and simultaneous search warrants were then executed across four residential properties in Curtin, Lyons, Holder and Conder and one commercial premise in Canberra City.

This resulted in the seizure of one kilogram of suspected methylamphetamine, 500 tablets of suspected MDMA, approximately 28 grams of cocaine, a sum of cash and a small amount of steroids.

“It is believed the 28kg of drugs were destined to be shipped out of the ACT to the Victorian illicit drug market. This amount of drugs could equate to 280,000 street deals valued at over 25 million dollars.”

“The substantial seizure of illicit drugs and arrest was the resolution to an ongoing police investigation which included a seamlessly coordinated effort by many areas of ACT Policing and AFP resources.”

Police urge anyone who may information regarding manufacture, sale or distribution of illicit drugs to contact Crime Stoppers on 1800 333 000, or via https://act.crimestoppers.com.au. Information can be provided anonymously.

Whatever happened about this? Haven’t heard a thing for over a year………….

someone has a lot of explaining to do.

Said “51 year old Curtin man” (named on ABC website) should have altered his Facebook settings! All his friends – including federal public servants – are there for the world to check out.

He used to live in a housing trust home in Kambah.
Business must have been good.

Said “51 year old Curtin man” (named on ABC website) should have altered his Facebook settings! All his friends – including federal public servants – are there for the world to check out.

A bit unfortunate to happen during Curtin’s 50th anniversary celebrations. That sort of thing didn’t happen 50 years ago …

I was wondering what I needed to do to afford a house in Curtin.

Tom Worthington - 13 minutes ago
We need a new railway station, but it would not be cost effective to put it in the city centre. It could be instead located a... View
News 53

chewy14 - 18 minutes ago
JC, simply not correct, I'm not anti anything other than bad governance and poor decision making. Particularly when the decis... View
Ashley Wright - 2 hours ago
Julian Sortland believe already decided Canberra will use batteries rather than supercapacitors and the original vehicles are... View
Ashley Wright - 2 hours ago
Susan Williams that’s good because light rail whilst using similar vehicles is different to a tram way in that it is design... View
Lifestyle 41

Nancy Olsson - 31 minutes ago
Fantastic display hmmm will visit next year. View
Sue Brooks - 2 hours ago
So beautiful. Looks like a painting. View
Heather Alexander - 4 hours ago
LoveTulip Tops gardens, so glad you have posted these wonderful pictures. View
Opinion 32

Frank Koch - 39 minutes ago
Margaret Freemantle no I don’t but I know of her and she has done well so we shouldn’t begrudge her in any way. Most peop... View
News 17

Albert Jacka - 1 hour ago
Thought that would have been heritage listed for sure View
Adam Beams - 3 hours ago
Geoff White the water really isnt that deep around there so wouldnt have caught much other than bait fish. View
Graham Hannaford - 4 hours ago
Geoff White That's a cracker of an idea View
News 20

When it comes to electrical work around your home, there is no question that a fully trained and experienced tradie is...
News 53