An insight into the fight to save Tathra Public School 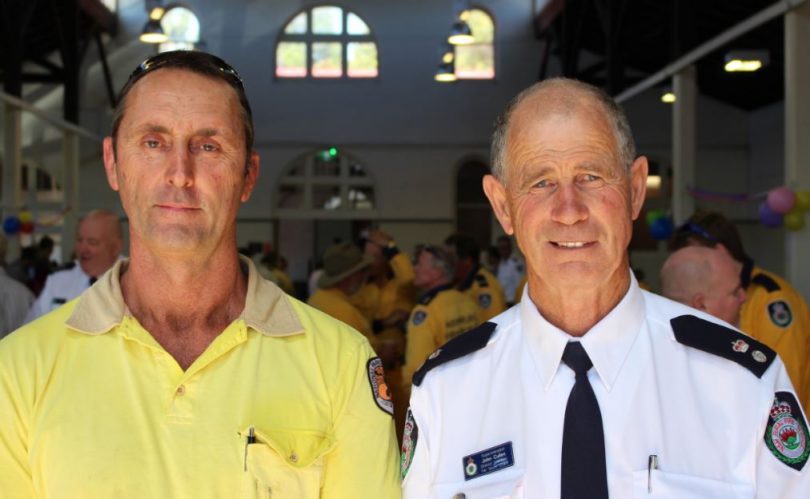 “It was a matter of pick a house and save it,” – the words of firefighter Brett Evans as he reflects on the effort of Sunday, March 18 as flames moved into the heart of Tathra.

Brett works with the National Parks and Wildlife Service and has been a bushfire fighter for close to 30 years, “You feel apprehension, but probably not fear, our guys are really well trained, and when you do that much training, you just kick into gear,” he says.

Aside from saving a number of houses, Brett and his National Parks crew of 14 were instrumental in saving Tathra Public School.

News that the school was safe took time to confirm and trickle through to the many people who evacuated Tathra on that Sunday afternoon to the Bega Showground. Given the hideous weather and the intensity of the fire many had witnessed, stories that the school had been lost were accepted as fact.

In the hours after, word that the school had in fact been saved was met with huge relief and spread just as quickly as news of its destruction.

The fire started roughly 17km away from Tathra’s classrooms, but soon found its way to the school’s fenceline on Pacific Street. The blackened trees in the neighbouring bush show how the fire was channelled towards the school by the gully to the northwest. 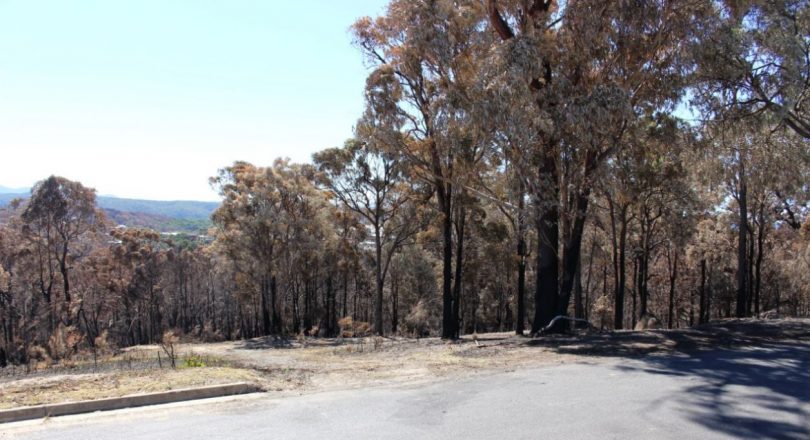 The bush gully at the back of Tathra Public School channelled the intensity of the fire. Photo: Ian Campbell.

Brett says they are the worst conditions he and his crew have ever faced, “I’ve been doing this since 1990, this one takes the cake.”

“Bushfire fighting is essentially our game, this one was a little different, for many of the staff we had there it was the first time they have had to fall back to property protection,” Brett says.

“In respect to saving anything like the school, it was a team effort – the RFS, Fire and Rescue, Forestry, we were all there.

“All the agencies have done a fantastic job, this fire wanted the whole town and it didn’t get it.”

The region’s chief firefighter, John Cullen from the Rural Fire Service says the skill and bravery of the National Parks and Wildlife Service and the Forestry Corporation was key to protecting people and property in the communities of Reedy Swamp, Vimy Ridge, and Tathra.

“Traditionally these people are bush workers, but the role they played in town was pivotal, particularly with their mobile slip-on firefighting units,” he says.

“Generally these are four-wheel-drive vehicles, they carry 600 litres of water and tools for firefighting and mop-up.

“Two or three people in those vehicles, moving quickly bashing out little fires – so important on those days,” John says. 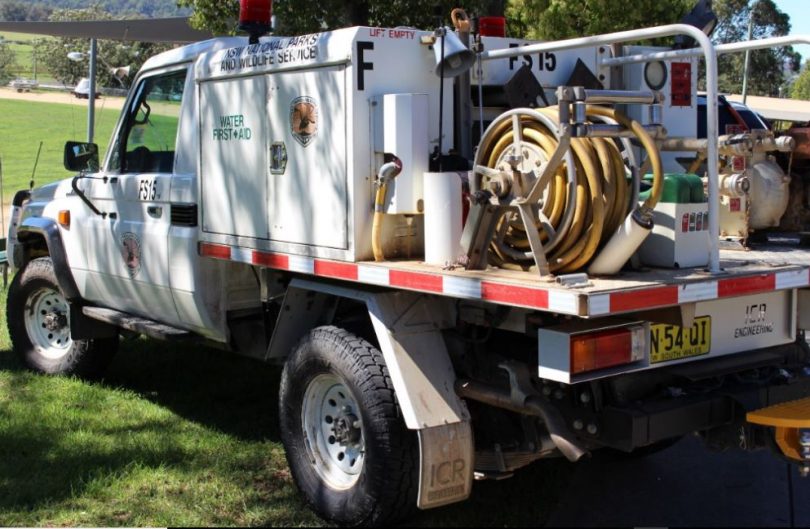 School resumed on Tuesday (March 27) for the 234 kids of Tathra Public School.

“If not for the commitment of the emergency services I am certain most of our classrooms which run along Pacific Street would have been lost, perhaps the entire school,” Principal, Lisa Freedman says.

“Words are not enough. I’d like to meet, hug and thank everyone who saved our school. I’m sure our entire community feels the same.”

Considering what might have been, damage to the school has been relatively light.

“We lost our back fence and a large sun shade covering our eating area, but they will be replaced by insurance. Sadly 120 trees have had to be removed as they had become unstable,” Lisa says. 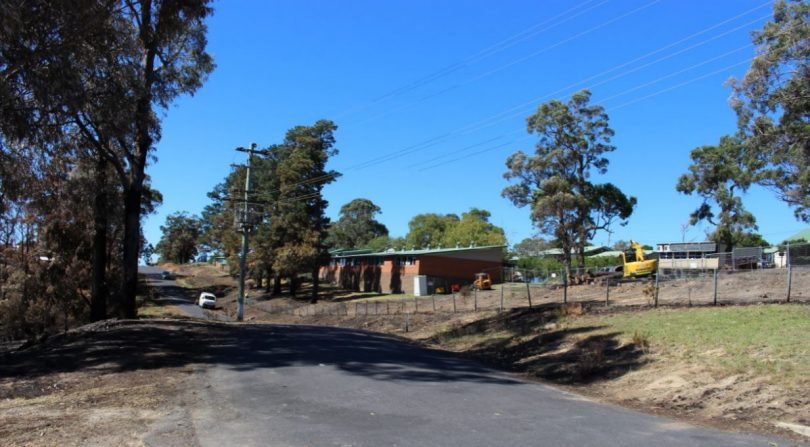 The school’s boundary with Pacific Street where 120 trees have had to be removed, a fence and shade sail were also destroyed. Photo: Ian Campbell.

The school will hold it’s annual Pedlars’ Parade and Market on Friday, April 13, normally a major fundraiser for the school itself but staff and students have decided to donate the money raised to the Tathra Rural Fire Service.

“This is one way we can say thanks to at least some of the emergency services involved. We want to invite anyone who helped to a special barbecue we are hosting on that day,” Lisa says.

Extra counselling services and staff have been deployed to the school to support students, teachers, and staff who each have their own unique experience of the fire, including the loss of their home.

“Last week tested the strength of our community. It was a very challenging time for all of us. A school community is a unique part of the bigger community. We are our own little family. I am very proud of Tathra Public School.” 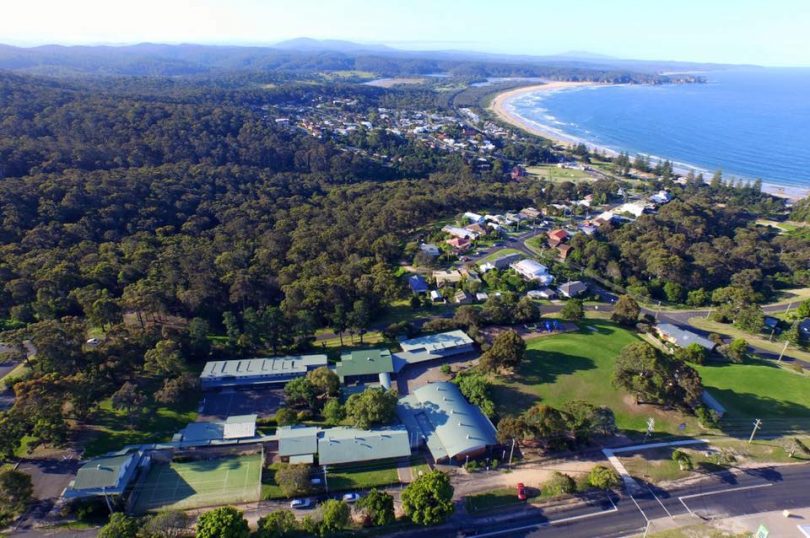 These people are heroes that wear their underpants correctly. Ian

Jenny Graves - 15 minutes ago
Kit Oates those people who get impatient, in my experience, tend to tailgate. If you don't, then that's great and I apologise... View
Alex Dee - 58 minutes ago
You need to get out more. View
Francesco Merlino - 1 hour ago
Alex Dee Alex Dee I hope you are right! View
event 1

Dom Polegubic - 33 minutes ago
This is a good link to an intro to Croatian wines: https://winefolly.com/deep-dive/introduction-to-croatian-wines/... View
Opinion 11

Deepak Ramanath - 54 minutes ago
James Forge Wow, where is this? View
James Forge - 55 minutes ago
Deepak Ramanath the government is about to demolish an overpass and replace it with yet another set of traffic lights View
Kylie Wylie - 1 hour ago
Residents of Lyons suffer badly every work day. Every main road is gridlocked with rat runners that mostly won't even let oth... View
Lifestyle 2

Rex flight lands safely at Merimbula on one engine