Dashcam footage from a light rail vehicle has shown another near-miss on the Northbourne corridor after a man walked in front of the vehicle last month, highlighting the need for pedestrians to be alert and aware around Canberra’s light rail.

Transport Canberra has released ‘near-miss’ footage from onboard a light rail vehicle dashcam to highlight the hazards of pedestrians failing to obey instructions and follow road rules along the light rail corridor.

In this near-miss incident, two construction workers were about to cross the tracks in front of a light rail vehicle.

In this video, one worker has pulled the other away from the path of an oncoming light rail vehicle. The workers were not associated with the light rail project in any capacity and were crossing the tracks away from designated pedestrian crossings.

It is the first on-board footage to be released from light rail, which is in the final testing phase ahead of the launch on April 20.

The Transport Canberra video, released today, occurred in the same week as two incidents on the 9 March.

Dash cam footage from a car travelling on Randwick Road, Mitchell towards the T-intersection on Flemington Road, showed the tram almost colliding with the car after running a red light. The driver was suspended but has since returned to the track.

That same morning, a man was hit by a light rail vehicle at the intersection of Northbourne Avenue and Cooyong Street. It is believed the man, who suffered leg and upper body injuries, jaywalked in front of the light rail vehicle while wearing headphones.

A Transport Canberra spokesperson said the new footage highlights the dangers to pedestrians and all road users of failing to pay attention around light rail vehicles.

“Working closely with ACT Policing and ACT Emergency Services Agency, Transport Canberra and Canberra Metro will be targeting pedestrians, cyclists and motorists with a series of rail ready safety and preparedness around light rail messages,” the spokesperson said.

“These messages will be distributed via social media, video, media briefings and through face-to-face engagement with schools, social organisations and the community in the lead up to light rail services commencing in April.”

“Light rail vehicles travel quickly and quietly along the light rail corridor,” she said. “They can approach from either direction, so it is imperative pedestrians only cross light rail tracks at intersections and designated crossings. And to look in both directions before doing so.”

With an emergency braking distance of more than 80-metres in good conditions at a line speed of 70km/h, the public should always be aware and pay attention when travelling along the light rail corridor.

“This near-miss footage is a timely reminder for everyone in the community to be aware, stay safe and obey the road rules around light rail,” Ms Fitzharris said.

“Light rail safety is everyone’s responsibility. Please pay attention and share these important safety messages with your family and friends.”

The whole concept was a joke from the start, taking it to Woden is beyond belief. Canberra’s politicians still building monuments to themselves.

Given the number of people wandering around in a trance-like state, glued to their smartphones, perhaps a GPS app which warns “you are about the be squished by a white elephant” would be useful.

The leaves from the dead eucalyptus trees fouling the tram tracks present a greater potential for skidding than ice does.

And there is the certainty of frost on the rails. Frost doesn’t need water to form or it didn’t before climate change was invented.

Apparently Canberra’s light rail system didn’t think to have audio advice for blind people, something mentioned on ABC radio and that they are now madly trying to retrofit by end April. Some accessibility arrangements! CBR is strong on LGBQTI rights, but – disabled access? Not so much!

What kind of “advice” is needed? I’m really curious to find what may have been omitted seeing as their are door chimes and stop announcements etc. I don’t recall ever being anywhere that has had any more than that.

I visit Gent in Belgium annually to see family and the light rail system there utilises loud bells on vehicles to warn people to get out of the way. Not sure what warning system the Canberra light rail has but I can recommend the bells. One rail route runs down the narrow main shopping street in Gent and everyone (apart from some tourists) are used to quickly getting out of the way when they hear the bells.
The Gent light rail runs from the south of the city to villages in the north, roughly 15-18km.
Central Gent’s population is around 262,000 but many thousands also live in adjoining towns and villages so the area serviced by the light rail could be around 320,000.
In the last few years the local authorities have revamped the light rail system, upgrading and expanding it. The central area of Gent has also been made traffic free apart from service vehicles, light rail and buses. All this has made touring around the city very pleasurable, something that could be achievable here in Canberra.

Population density of Gent is 1700 per square kilometre while Canberra is paltry 443.

This is the same reason why light rail will be a disaster in Canberra.

And what is the population density of the corridor, especially Flemmington Rd and Northborne Ave. certainly higher than the act average which is why stage 1 will work. Though stage 2 I have my doubts, would work if it went down towards Kingston rather than Woden.

They have bells and horns here too.

The issue would be when do they get used. Bells normally in high pedestrian areas when taking off as a gentle warning (which I’ve heard at Gungahlin) and horn for the more serious hey stupid warning.

As to this issue who knows what the driver was thinking, maybe they thought the guys knew what they were doing and would keep away, who really knows.

One thing is for sure the person that nearly stepped out owes his mate a beer or two. And if he got hit only him to blame for being so stupid to not look and for being there in the first place. It seems they were not lightrail workers but workers from a construction site across the road who were cutting across Northborne including climbing over the rope barrier and then not looking when crossing the tracks.

Oh here is a link to the population densities in the ACT. And look at that it is over 2000 per km2 over much of stage 1! Who would have thought hey?

Well, you tell me what the “corridor density is and why “it will work”.

Only people who are travelling to Canberra city (and perhaps stops in between) are likely to use the tram and there may be reasons why they will take their car instead.

The whole project has been done “arse about face” – very much “build it and they will come”. All of this because of one man’s bargain. Power certainly corrupts.

I don’t think Palmerston and Harrison could be said to be in the corridor, really.

I see plenty of potential Darwin Award nominees each day around the Civic bus interchange.
The drivers must get sick of honking at the idiots that walk out in front of them, most of whom have their heads in their phones.
And, these are vehicles that make a decent amount of sound coming towards you.

Might work as a natural selection machine. It shouldn’t need barriers and people shouldn’t have to be continually warned.

Icy rails will mean the tram will slide and they’ll have to slow their precious timetable. Lucky all testing was done over summer.

What chance do they have of being approved in 2 weeks?

We don’t get ice in this ACT all that often. For ice to form it needs to be freezing cold and wet.

And besides modern light tail has excellent traction control plus of course they have the ancient solution of dropping sand onto the rails for grip.

Eventually, the trolley folly will have to be totally fenced off to protect the public from a century old technology.

Add another few million dollars to the cost.

At least the wire mesh will blend into the newly created wirescape that replaced the pristine median strip that used to be there.

Whilst not a full on fence, if you look there are barriers with a rope to the side of the tracks.

And as someone in the Canberra times article pointed out these workers would appear to be workers from one of the building construction sites taking a short cut across the tracks which means they would have had to climb over the barrier.

My point even if you build a barrier people will climb over it if they are desperate enough to take a short cut.

And if we are going to build a fence for light rail why not a fence along all roads, they are just as dangerous. Only need to look at the road death stats in Canberra pedestrians make up more than 40% of all road deaths. Bloody dangerous then roads.

There are thousands more road vehicles that trams. Who writes your script, JC?

There will be workmen along the tram track every day for its short life sorting out its problems so expect more “near misses”.

Oh and a pedestrian gets hit almost daily in Canberra by road vehicles with 4-5 deaths a year. Unless there is a death you won’t hear it in the news. Unlike lightrail which is flavour of the day by the chicken littlists, but of course should be in the news to help educate the dumb Sheepies to cross the road and tracks safely and to umm shock horror look.

All Hail the Tram! 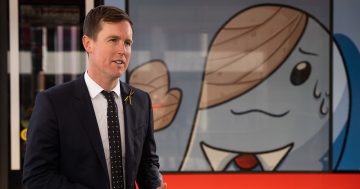