A driver of a light rail vehicle has been suspended after he ran a red light and narrowly missed a car over the weekend.

Around 8:30 am last Saturday (9 March), dash cam footage from a car travelling on Randwick Road towards the T-intersection on Flemington Road, Mitchell, showed the tram almost colliding with the car after running a red light.

A Canberra Metro spokesperson confirmed the light rail vehicle drove through a red T-light on Flemington Road and a review of the CCTV footage from the vehicle has confirmed it was the driver’s error.

The driver has been suspended from driving duties while a full investigation takes place.

“Safety of the public and our staff is Canberra Metro’s highest priority and we regret that on this occasion this founding principle of the Canberra light rail project has not been upheld,” the spokesperson said.

“Following the rules of the road is the key to staying safe around light rail and this applies as much to ourselves as it does other road users.

“As the investigation is still underway, we are unable to provide further information at this stage.”

The dash cam footage, which was posted on the Canberra Drivers Facebook page, has been watched over 47,000 times.

The near-miss occurred less than 40 minutes after a man was hit by a light rail vehicle at the intersection of Northbourne Avenue and Cooyong Street. It is believed the man, who suffered leg and upper body injuries, jaywalked in front of the light rail vehicle while wearing headphones.

In response to the latest light rail incident, the Canberra Liberals transport spokesperson Candice Burch said the Government should audit and report on all incidents that have occurred during construction and testing to ensure the safety of the Canberra community.

“The Minister’s Rail Ready campaign is considerably lacking in actual public safety awareness,” Ms Burch said. “The Government has not done enough to raise awareness amongst pedestrians, cyclists or drivers about light rail testing, and how to be safe around light rail vehicles.

“The Labor-Greens Government owes it to the Canberra community to audit and report on all incidents that have occurred during construction and testing. This is the least they can do to ensure all is being done to keep people safe.”

The ACT Minister for Transport Meegan Fitzharris has been approached for comment.

I’ve seen the movie Speed, maybe he was building up speed to derail the tram at the Epic bend?

It’s 2019 and we have a tram that doesn’t automatically stop at a red light. Why does it even need a driver? It’s on rails, how hard could it be?

It just proves that we’re paying a 21st century price for a 19th century solution to a transport problem.

We don’t have these problems in Tuggers. Being devoid of a transport/urban renewal corridor is a blessing. Our rates should be adjusted accordingly.

Ellie this is what i was talking about

Running red lights should be totally unacceptable, moreso for the drivers/operators of vehicles that carry fare paying passengers including light rail, buses, taxis and Ubers. However, one has to feel sorry for this light rail driver a little. He probably learnt to drive locally and has picked up the culture of red lights being somewhat optional. In addition, from my look at the video it appears the light may have been faulty because it changed without a vehicle being in the induction loop. Also, the Uber driver was most likely speeding in the roadwork zone and then also ran the following red light cycle.

But the benchmark behaviour has now been set and I expect a media release from transport Canberra today announcing the number of bus drivers stood down for running red lights. I expect we will run out of bus drivers early next week from what I see on a daily basis.

So did the pedestrian who got skittled cross the red light or was it the train?

Angela Thomas apparently walked across on red & was wearing headphones

Angela this was a 2nd incident

Ken Quilty yup, that’s what they said but as the train then had a problem recognising a red light and the pedestrian didn’t have a dash cam to prove his point…..?

So two incidents on the one day and it’s not even operational yet. This will make for some interesting entertainment

Susan O’Meara oh good, now someone’s been hit by one and one of them has run a red light 🤦🏻‍♀️

Hopefully all of the safety requirements for design were identified and the Human Machine Interface design requirements were agreed prior to entering service?

entering service…do you know what that means ?

I’m just interested to see how it actually works. Being in Canberra, I have to assume all the tram drivers will want to drive in the friggin right lane all the time………

But panic and cut everyone off when wanting to turn at the next intersection!

Maybe they can use the bike lanes. No one else is

Liv Padley its a trainwreck

Emily Sisson they are lightly off the rails

John Kane driver has been suspended! good God you can’t make this stuff up haha

I am not driving across Northbourne anymore.

I noticed cover the past few days the fast speed the light rail is clicking as it hits Braddon .

And so it begins

Better light those trains up with LuminAuz® before they kill someone!!!

Paint the trains in LuminAuz®

What a close call – how lucky the driver had a dash cam. Two incidents within 40 mins of each other and it’s not even running yet 🤔

Lynne Audsley
The first was a pedestrian idiot

Maybe he was distracted by all the passengers???

Kevin Read on his phone mate

Ashley Barber He was over the line when it was green

David Donovan and the car drivers

imagine how fast the communtes must be

This is off to a great start 😂

some would say off the rails…. ill show myself out

I haven’t seen any Rail Ready materials/promos – and I will certainly be crossing Northbourne on foot.

I’ve seen a few of the LR vehicles catch the end of a green light over the last fortnight, but that was just crazy.

Yes not good on the light rail driver’s part but it looks like the Uber driver could take a bit more care, even though he did stop in time.
Unless the video has been speeded up it appears the Uber driver has ignored the 40km/hr sign and is doing around 60 as he approaches the intersection. The road also look wet after rain. A vast number of drivers here ignore 40km/hr zones around road works and schools. I see it everyday when I am out and about on my motorcycle.

This is what the testing is for – to get everyone used to a new normal. Glad to see issues are being flagged now, early on before passengers are on board

You actually know people who are going to use this useless tram? 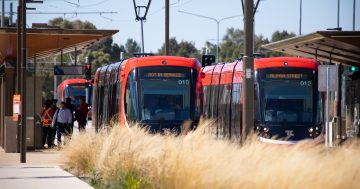