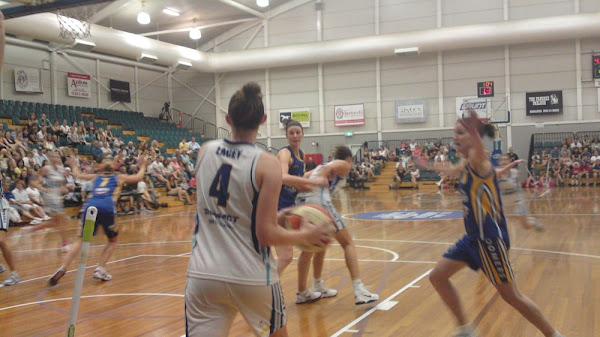 Yesterday afternoon down in Melbourne the Canberra Capitals went down to the Bulleen Boomers by a meager 4 points after leading, at one point by as much as 19 points, throughout the game until oh halfway through the final quarter. This was the major first finals game (home and away ladder positions 1 v 2) for the winner going straight to, and hosting, the grand final – with the loser getting a second chance against the winner of 3 v 4. The final scoreline was 67-71.

I was ‘lucky’ enough to be able to get along to the game down in Melbourne and honestly while I was devastated to witness the unlucky turn of events in the final quarter – not to mention endure smug looks from the otherwise and until the final 5 minutes miserable and quiet Boomers fans around me – I cannot fault the Caps’ game.

Bibby hit some awesome 3 pointers, Hunt played a great game, and Tolo while not scoring heaps contributed to a brave defence against Cabbage (Cambage). They really were unlucky to lose. Dare I say it but let’s all pray Suzy Batkovic’s elbow infection clears the hell up so she’s right for next week’s game here in Canberra against the Bendigo Spirit, who won the 3 v 4 game this afternoon. She’ll make the difference I think and see the Caps take Bulleen on their home court in the grand final like 2010.

Next week’s semi-final is at 3pm on Saturday at the AIS. Come along Canberrans and support your premier WNBL team!!

They shouldn’t have lost that match – but when all else fails blame the refs. Especially in the final quarter they blew their whistles even time Cambage even looked like getting the ball. Although if you can’t keep her out of the key you have to live with that.

Can’t understand Graf’s coaching either. Hunt was the player of the match and Lacey had a shocker – yet it was Lacey with the ball inside the last 20 seconds.

Go Caps! I will be there to cheer you all on.

Yeah they were in the box seat and gave it away in the last quarter. They are a different team with Batkovic however and if they can get to the GF , Batkovic will nullify some of Cambage’s scoring potential.

jwinston - 12 minutes ago
Yet again more meaningless legislation that less than 1% of the care about. Fix the hospitals and education before implementi... View
nobody - 1 hour ago
Colonisation turned this continent into the great country it is today. If colonisation had not taken place, then MLA Paterson... View
Opinion 15

gooterz - 22 minutes ago
I'm open to a pyramid league. View
Eddie Majcic - 38 minutes ago
Yes. We need the AIS precinct better utilised. Open it up more to the public get more people using it. It's a great facility... View
Heavs - 55 minutes ago
I actually like what the Tasmanian Government just did. They partnered up with Hockey and bought a rolling bunch of events to... View
News 2

@the_riotact @The_RiotACT
Ratepayers and residents in 124 local government areas across #NSW go to the #polls on Saturday, 4 December. Here's a rundown on what you need to know https://t.co/cZ78vqVrLb (11 minutes ago)