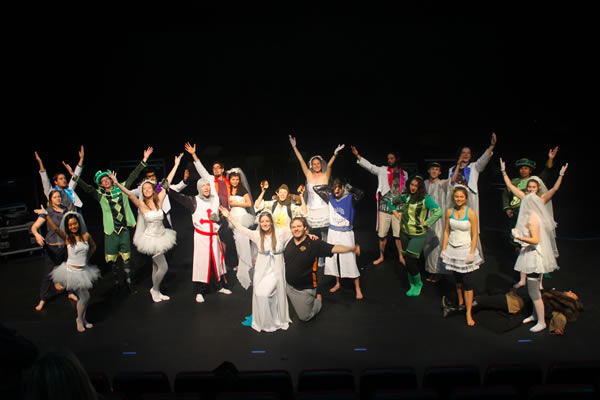 From the 16th to the 24th of May, a cast of extremely talented students at the ANU will be performing the musical Spamalot at the ANU Arts Centre. Brought to life by the student society ANU Interhall Musical Productions, who have previously performed CATS (2013) and Chicago (2011), Spamalot has been an exciting opportunity for students from across all disciplines to get involved either with their dancing and singing skills, or backstage on the production side.

The musical itself is based off of the film Monty Python and the Holy Grail (1975), a rambunctious satire that follows the adventures of the mythical King Arthur and his Knights of the Round Table as they search for the Holy Grail. Spamalot loosely follows the same plotline, but features much more dancing and infectious singing. On their journey, King Arthur and his Knights come across political anarchists, some misbehaving Frenchmen, a vicious bunny, and have mysterious interactions with the Lady of the Lake.

Director Milly Cooper has previously been involved with many of the NUTS society’s plays, but says of Spamalot that, “although I’m fairly new to the world of directing, I can say without a doubt that this has been the best production I’ve yet had the pleasure of being involved with”.

“Some people think Monty Python is outdated now – take one glance at Spamalot and the fresh new ways it has revived these classic jokes, and they’ll see how the wit and humour can be brought once again to life through this great musical”.

As the society’s annual performance, Spamalot is one of the biggest student-run productions in the ANU calendar, “With a cast, orchestra, crew and production team of 50+ people, it wasn’t ever going to be an easy-to-do show, however everyone seems to have come together; working on the same level and all with such great energy, that what we have is a tight show and a tight-knit group of people”

Robert Lang - 29 minutes ago
Kirsty Noad I work in the trauma operating theatre of Canberra Hospital. I have not seen any scooter injuries. I see major tr... View
Robert Lang - 31 minutes ago
I too gave a hearing disability. I stand to the left of all shared paths. No problem. View
Robert Lang - 32 minutes ago
Cheryl Thuillier yep, and let’s make car drivers wear helmets too. After all, car crashes are the number one cause of head... View
News 4

Anthony Stewart - 32 minutes ago
Really 104.7 is no surprise I turned off after a month of the ‘new’ breakfast DJ when they started View
Guy Noble - 2 hours ago
Tom Adam I dont think he and Bec have done anything to promote themselves lol View
Tom Adam - 2 hours ago
Happy to use this to negotiate a better radio advertising rate. View
Opinion 55

Luke Costanzo - 49 minutes ago
Michael Pearson zero facts or fact checking. All conjecture and clickbate. Try again View
Julie Macklin - 1 hour ago
I had my first Astra Zeneca vaccination last Thursday. Initially all I had was a slightly sore arm, which soon faded. However... View
Luke Costanzo - 1 hour ago
Jeannou Zoides check mine out with the nice NHS logo. I had it 3 weeks ago and I am still alive. Problem with the anti vax co... View
News 1

ChrisinTurner - 59 minutes ago
I hope the panel addresses the problem of attracting technical specialists like engineers and certain IT people. The current... View
Food & Wine 41