Unit rents are on the rise. Photo: File.

Canberra’s residential rental market has tightened again with the vacancy rate falling to 1.1 per cent in June. Tuggeranong, Gungahlin and Belconnen are the toughest suburbs to find a place to rent.

Rents continue to fall for houses and units are on the rise but, overall, Canberra remains the second most expensive capital city in the nation to rent a home, according to the latest data from SQM Research.

More properties had come on to the market in recent months as owners converted short-term rentals such as Airbnbs to longer-term arrangements but with the loosening of COVID-19 restrictions and reopening of some borders that process is now in reverse.

The national capital had 731 vacancies in June down from 880 in May when the vacancy rate was 1.3 per cent, the same as for this time last year but with 847 vacancies.

The best chance of finding a property, particularly a unit, was in Canberra’s inner suburbs.

Most vacancies were in the inner south (182) and north (281), reflecting the large number of units being built there. Vacancy rates were 1.3 per cent and 1.9 per cent respectively

Tuggeranong had the lowest vacancy rate (0.4 per cent) and the least number of vacancies at 35.

The smaller area of Weston Creek had the next least number of vacancies at 39 but its vacancy rate was slightly greater than the overall rates at 1.3 per cent.

Gungahlin’s vacancy rate wasn’t much better than Tuggeranong at 0.6 per cent but there were 65 vacancies.

In the Woden Valley, there were 59 vacancies and the vacancy rate was 1.1 per cent.

The average asking rents for houses at 12 July was $617 a week, down 0.7 per cent on the previous month. In the past three months, house rents have fallen a total of 4.7 per cent and they are now down 1 per cent on the same time last year. 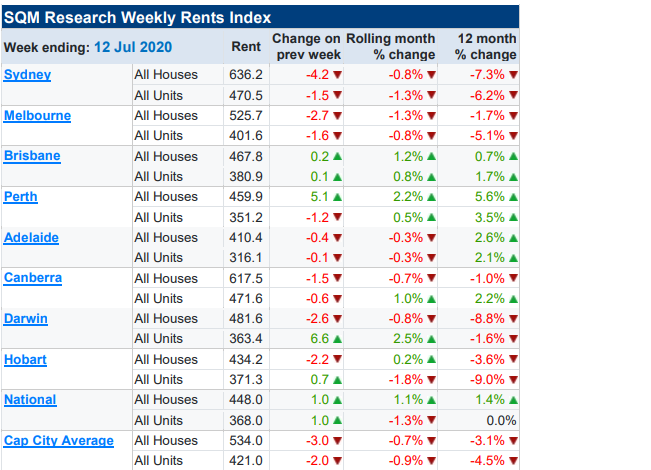 However, units are up 2.2 per cent on the year at $471, after rising 1 per cent for the month, possibly reflecting new stock in the market or greater demand for more economical living than expensive freestanding houses.

The SQM Research data shows the national residential rental vacancy rate fell over the month from 2.5 per cent in May to 2.2 per cent in June.

This time last year, the national vacancy rate was slightly higher at 2.3 per cent.

All capital cities recorded declines in vacancy rates over the month.

Managing Director of SQM Research Louis Christopher said the surprise fall in vacancy rates was due to Airbnb property owners giving up on the longer-term leasing market and moving back to short term leasing, especially in light of the July school holiday period and the opening of some state borders.

”The fall in rents over the same period for a number of our capital cities suggests that the weakness in the rental market remains.

”Going forward, our expectation is the Australian rental market will remain weak for the duration of 2020 or until such time as the international border reopens and we as a community have passed the worst of COVID-19.”

But Canberra looks like staying the exception. Although rents are falling for houses, they remain high, and together with units still attract the second-highest rents in the nation.

ACT Government needs incentives for property investors to develop in Tuggeranong. If these figures are correct there is obviously a need for renters to live in Tuggeranong, but investors won’t put money into a region Tuggers if they don’t see the government providing facilities, services and up to date infrastructure.

Plenty of land in Tuggeranong, just no incentives to develop.

Ashley Stirling Gungahlin hard to find a rental? Surely not

Rental guarantees are a device to snag first time investors. It was rife with a couple of home unit developments in Kingston about 20 years ago and it ended in tears for many investors.

What the table clearly shows is that Canberra now under Barr has the highest rents for units of all capital cities and the second highest rents for houses. This proves that housing affordability under the ACT Labor government is a dismal failure.