Collaboratively and competitively delivered across the nation
2 December 2021 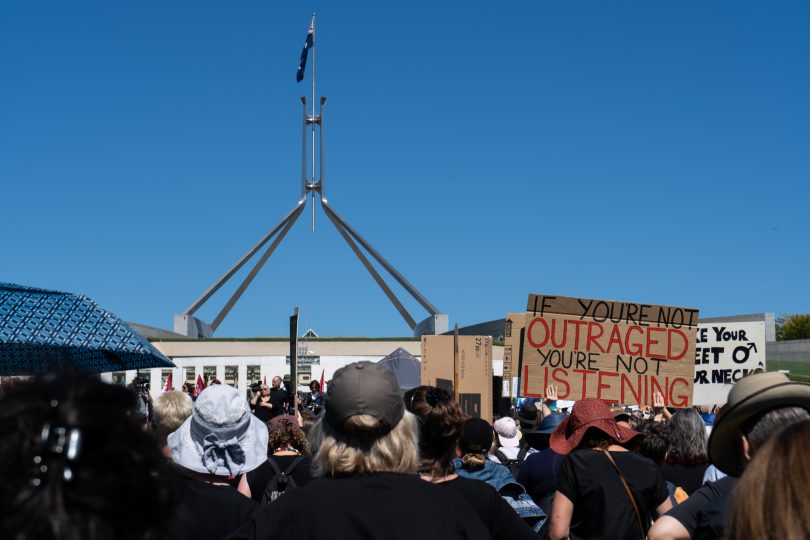 The March4Justice protests in March were a response to gendered violence and workplace harassment. Photo: Region Media.

Bullying and harassment complaints have increased in the Australian Public Service and those of a sexual nature doubled in 2020-21, according to the 2021 State of the Service Report.

The increase in complaints comes as the rate of perceived bullying and harassment continues to decline, from 17.2 per cent in 2015 to 11.7 per cent in 2021.

A total of 571 employees, or less than 0.4 per cent of the workforce, were the subject of an investigation into a suspected breach of the APS Code of Conduct.

It is impossible to tell whether Brittany Higgins’ Parliament House rape allegations have contributed to more reporting of unwanted sexual behaviour.

The report also acknowledges that under-reporting is an issue. More than half (59%) of 2021 APS Employee Census respondents had perceived harassment or bullying in their workplace over the previous 12 months but not made a complaint.

The most common reason cited by these employees was that they did not think any action would be taken (53%), followed by concerns around upsetting relationships in the workplace (45%) and that it might affect their career (43%).

The most common types of harassment or bullying remain verbal abuse, interference with work tasks such as undermining or sabotage, and inappropriate and unfair application of work policies or rules.

“Further work is needed to create a culture where those targeted feel comfortable to report and confident that swift action will be taken; a culture where bystanders also call out inappropriate behaviours so they can be addressed,” the report says.

But the Australian Public Service Commission believes the Code of Conduct mechanisms are robust enough for people to make complaints but acknowledges other cultural barriers are preventing some from coming forward.

The report said that for the first time, women have reached, and in most cases exceeded, parity with men at every level up to and including the Senior Executive cohort.

Nonetheless, a refreshed APS Gender Equality Strategy will be released by the end of the year to strengthen the APS’s approach to preventing and responding to gender-based harassment and discrimination, sexual harassment, sexual assault and bullying.

There will also be new annual reporting from APS agencies on gender equality measures to the Workplace Gender Equality Agency (WGEA) from 2022-23, in response to a recommendation in the Australian Human Rights Commission’s Respect@Work: Sexual Harassment National Inquiry Report.

The report says that a cross-agency pilot is underway with the Department of Finance, Department of the Treasury, the Fair Work Ombudsman, WGEA and the APSC to work through the data to be reported, and will include information on policies and training relating to gender-based harassment and discrimination.

“This reporting will enable the APS to better understand and track progress against key metrics of workplace gender equality and benchmark performance against other entities,” the report says.

“It will aid in identifying gender equality challenges so that action can be taken to address these.”