Are the Brumbies planning to play Moneyball?

With the movie Moneyball out recently (starring Brad Pitt no less) I was inspired to at least read the book.

And the more I read the book, even as someone who knows next to nothing about baseball, the more I realised that at least a similar approach was what the Brumbies need to adopt if they want to succeed.

Back in the glory days (late nineties and early noughties) they certainly had a somewhat similar approach. Picking talent in the discards of NSW and Queensland and redefining the way the game was played to suit the strengths of the players available.

But it’s 2012 now, and there are teams in Perth and Melbourne looking to do exactly the same thing with the support of much wealthier target markets than Canberra.

But there’s certainly hope in the new regime at the Brumbies under Jake White.

Most of the known star players have been shown the door and they seem to have picked up a lot of under-rated talent which fits a specific game plan.

This line from the end of the book (when other poor teams started to pick up the moneyball system) sounded familiar:

What happened was that the Jays went, overnight, from being a depressing group of highly paid underachievers to an exciting team. They were younger, cheaper, and better.

(Oh and read the book: Moneyball: The Art of Winning an Unfair Game . Seriously, it’s really about people and management, not baseball)

Some other quotes which seem pertinent:

if you challenge the conventional wisdom, you will find ways to do things much better than they are currently done.

What begins as a failure of the imagination ends as a market inefficiency: when you rule out an entire class of people from doing a job simply by their appearance, you are less likely to find the best person for the job.

Win with nobodies and the fans showed up, and the nobodies became stars; lose with stars and the fans stayed home, and the stars became nobodies. Assembling nobodies into a ruthlessly efficient machine for winning baseball games, and watching them become stars, was one of the pleasures of running a poor baseball team.

Six television screens display a soundless frenzy. No one in the video room so much as sighs. They have no interest in morality tales. Morality is for fans. 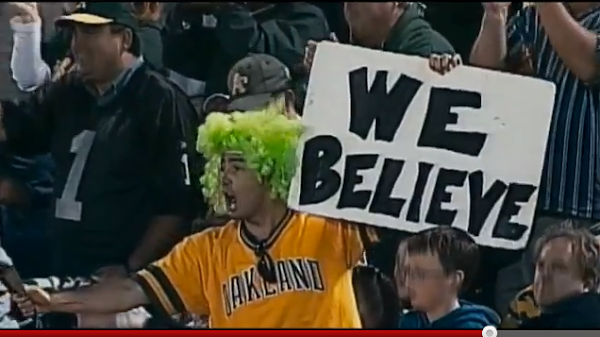 One Response to Are the Brumbies planning to play Moneyball?
Filter
Showing only Website comments

I think that given the last couple of seasons paying over the odds for “star” players to underperform, a bit of Sabermetrics-type analysis would surely pay off. I’ve got a good feeling for this year, JW’s never been one to shy away from challenging conventional wisdom!

Andrew Fisher - 56 minutes ago
Em Jay - I just thought of you. Not sure why. View
Opinion 22

bj_ACT - 2 hours ago
I think you’ve raised some valid questions. There might well be valid answers from the ACT Government to those questions. I... View
aussie2 - 6 hours ago
Most of us know by now that the bus run from civic to Woden is very efficient. They want to change it to a light rail route d... View
News 44

Capital Retro - 4 hours ago
"The data is only accessed by ACT Health if it is needed for contact tracing purposes and contact details are deleted after 2... View
garyfrancis - 12 hours ago
Under what rule, law or legislation is this being bought to us via? View
garyfrancis - 12 hours ago
Argo please. The 28 day "guarantee" really? Who is going to get caught holding onto the information for more than 28 days? Wh... View
Property 36

jorie1 - 5 hours ago
These changes are ridiculous and will only force landlords in the ACT to sell up. It is already not financially viable to hav... View
Maya123 - 7 hours ago
The best time to get houses upgraded would be when the house is sold. This would then cover both rentals and owner live in ho... View
Acton - 10 hours ago
First will be calls from tenant lobby groups for mandatory roof insulation, then better blinds and curtains, double glazed wi... View
What's On 8

Johnny Swift - 6 hours ago
Peter Fogwell 😂 I'm undecided whether or not to ask you to enlighten me. 😂 View
Roberto Manna - 6 hours ago
Samantha Jayne I’ll be watching to see if you marriage works out 🤣 View
Samantha Jayne - 7 hours ago
Cole Petrow why don’t I show you a bit of my work mate....... That might shut you up 👌 View
Lifestyle 2

Alan Davey - 22 hours ago
Thats common sense for you ,some people live and let live, others winge for wingings sake ,... View
Property 10

Gabriel Spacca - 22 hours ago
Because if there’s one thing Dame Patti Menzies stood for, it’s unfettered development. View
show more show less
*Results are based on activity within last 7 days

If you want an example of hospitality grit, of a business team that picked themselves up from the lowest of...
Lifestyle 26

Canberra's Samantha Harvey has quickly become a favourite on Nine Network's latest season of Married at First Sight, not only because...
*Results are based on activity within last 7 days

The developer of the problem-plagued Gungahlin pool has been absolved of liability for building defects, including if further damage or...
Lifestyle 26

Canberra's Samantha Harvey has quickly become a favourite on Nine Network's latest season of Married at First Sight, not only because...
Community 25

@The_RiotACT @The_RiotACT
The Save the Narrabundah Peafowl group will put its issues with road safety and speeding motorists to the ACT Government after the deaths of several peafowl in the area https://t.co/QxMNzZFXoT (2 hours ago)

@The_RiotACT @The_RiotACT
Arts, culture, cafes with quinoa, and even a folk festival. This is the new Queanbeyan, a city that is alive and well https://t.co/c0hLpKFxY4 (4 hours ago)

@The_RiotACT @The_RiotACT
With more than 140 vineyards in the Canberra district, winemakers will celebrate 50 years of the region's finest drops during Canberra Wine Week https://t.co/nWA9owR0Oq (5 hours ago)