Art to gather people to Manuka

The privately commissioned work, called “Gather”, is by Brisbane artist Matthew Tobin. He was also involved in the design of the police memorial. 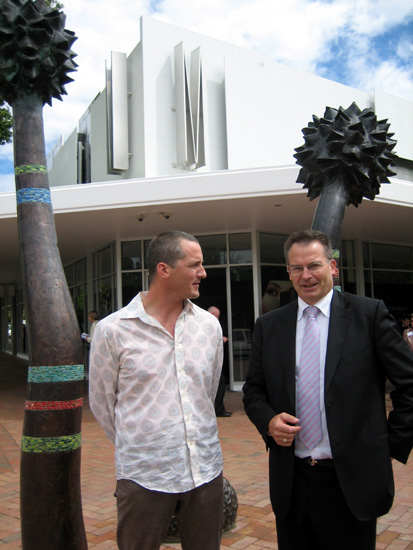 The work was commissioned by the Kador Group, developers of the M Centre on the corner of Flinders Way and Bouganville Street in Manuka. The managing director of the Melbourne-based company, Carolyn Parker, said she believed that “artistic expression is an important element in [the company] fulfilling [its] social duty”.

Mr Tobin said he was inspired by the seedpods of the maple trees around the Manuka shopping area. He said when he initially visited the area, he picked up some of the spiky pods and then imagined that kids like his own would gather the pods and play with them while waiting for their parents. He hopes his sculpture will be embraced by the community over time and eventually become a landmark.

The Chief Minister described the work as “engaging, attracting, attractive and with a touch of whimsy”. He also said he looks forward to a time when all developers will put public art in their new developments.

The government will launch an action statement on public artwork next month, which will include an outline for a plan to encourage more privately commissioned works.

Are you sure they’re London Plane trees? I don’t think the Manuka ones look all that much like the ones in the photos… but maybe that’s our climate?!

Good to see the developers are making sufficient $$ from developing ACT land that they can afford $hit like this.

are there any gidgi ? trees in caberra ? they have them in alice springs, and in spring they smell like sewage.

I never realised all these years that those ‘itchy balls’ trees were maples.

I don’t know about the others, but we used to peg those seedpods at just about anything that moved.

when i first moved to canberra, manuka had some quirky shops. i recall fondly the fishing tackle/hardware shop, with a the barber shop out back. id get my hair cut, buy some lures and a spanner and be on my way.

when i came back from a posting it was gone – replaced by a badly needed coffee shop.

good stuff. I shall see if I am whimsied next time I pass by.

I believe that Stanhope was attracted to the ‘spiky pods’, which well complement his spiky coiffure.

Even the Post Office which was one of the focal points of Manuka is now hidden in the boondocks of the Plaza with no street access or signage.

Oh, I forgot to add the comments of an elderly lady who wanted to know what all the fuss was as she walked home with her shopping. She said to me that they looked like “what the cavemen used to knock women on the head”.

I do hope it was the developers wasting money on this

According to the media release, the work was funded by developers.

I agree with Ralph – privately commissioned art does no harm, and I like the look of these itchybombs/bommyknockers/maces or whatever they are. I think the bulb above Stanhope’s head looks like dozens of baby birds crying out for food, attention or possibly funding.

I look forward to absorbing this piece’s touch of whimsy next time I’m in Manuka.

Since he got back from India Stanhope has opened more things than man in a door factory.

I do hope it was the developers wasting money on this.

illegal to own in act.

Dean Colwill - 14 minutes ago
Simplify the curriculum and get back to basics maybe. View
Lynn Nicholas - 22 minutes ago
Jimmy Stewart lack of choice perhaps View
Lea Powell - 44 minutes ago
If you have not been a teacher and experienced this for yourself, regardless of system, you really have no right to comment.... View
Property 1

Shane Jasprizza - 1 hour ago
Is “we thought we could cancel and sell for $100k more to someone else” a justification? View
News 1

bj_ACT - 1 hour ago
Woden has lost so many sporting and public facilities over the last couple of decades. The Tuggeranong ice sports facility is... View
Courts & Crime 9

Capital Retro - 1 hour ago
This was in a news release shortly after the fire started: "Army Lt. Gen. Greg Bilton said military helicopters involved in s... View
Steve Ulr - 4 hours ago
Matt Sposito absolutely correct. ADF need to be accountable for a change. They have been allowed to cover things up way too o... View
Opinion 31

Chris Cummins - 1 hour ago
Rob Calvert priorities vs funding. Complain to government. You complain of poor service - I gave you Ann important example of... View
Rob Calvert - 2 hours ago
Chris Cummins What's that got to do with the failure of the the police to respond to burglary, minor assaults, their failure... View
Paula Simcocks - 5 hours ago
Ryan Hicks did you ring police to report? View
News 19

Paul Magarey - 2 hours ago
If they can pay tax, they should get to vote. No taxation without representation! View
Capital Retro - 3 hours ago
"Most of the boomers on FB have no clue how the world works." Typical of the contempt we receive from young people these days... View
Geoff Roberts - 4 hours ago
Just an overt ploy to ensure the Greenies increase their vote and power. Absolutely NOT. View
News 36

Robert Hawes - 3 hours ago
The police should have one number to call, not three. They are blaming the public for something that is their own fault. View
Simon Adamson - 13 hours ago
Oh, hell no mowing during daylight hours is fine. I was more referring to the cops to attending break ins any more! View
News 76

Lazarus Taxa - 4 hours ago
Its about time the police were honest about their roll, they are not here to solve crime or protect you , they are here to ra... View
Tēē Rőy - 13 hours ago
Annette Hotchin police work View
Property 5

Karen Thomas - 5 hours ago
What happened with the conema that was meant to go above kmart, should of just kept the one that was in main street years ago View
Breaking 1

Sam Oak - 9 hours ago
Absolutely absurd that the goal posts have been moved by this incompetent government yet again! 14 days of quarantine for cas... View
show more show less
*Results are based on activity within last 7 days

@the_riotact @The_RiotACT
Threads of Policing is a new #exhibition at @_CMAG_ that shines a light on the heroic work of the @AusFedPolice, with rare exhibits on display until March 2022 https://t.co/0u4b34HFGW (23 minutes ago)

@the_riotact @The_RiotACT
New laws have been passed in the ACT Legislative Assembly that give greater protection to off-the-plan homebuyers from #developers wanting to rescind #contracts https://t.co/3qrzNvWaiE (2 hours ago)

@the_riotact @The_RiotACT
The government has shot down an attempt by the Opposition to get the working conditions and pay of ACT public school teachers referred to the Fair Work Ombudsman https://t.co/ZgMX2HaSpE (3 hours ago)