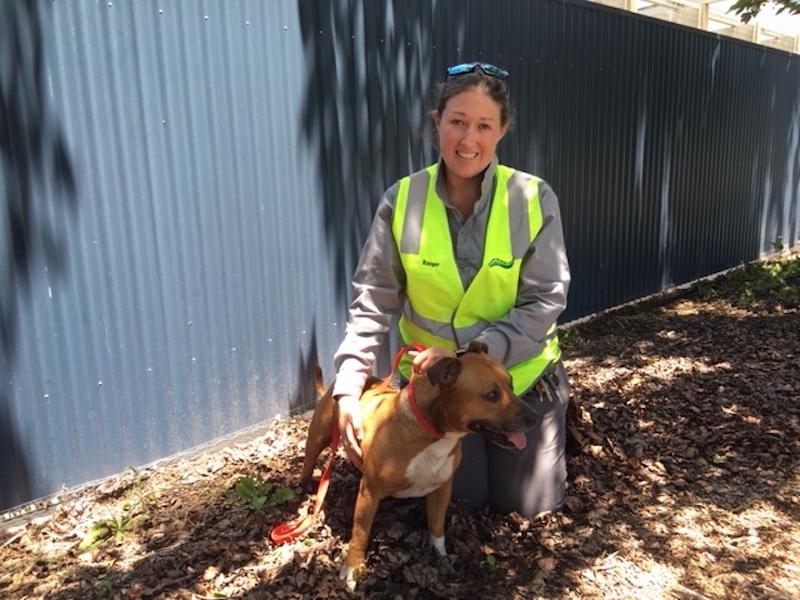 Unregistered, left to roam, or allowed off leash, dozens and dozens of dogs attacked other dogs, cats, people and other small pets in people’s backyards.

When spring and warm weather arrived, the rangers were run off their feet. So much so, a Goulburn Mulwaree Councillor asked why no parking infringements were issued. The attacks and holiday commitments meant rangers just didn’t have time for car parking duties.

“A lot of people out there just don’t care,” Anna says. “There are people breeding their dogs just to make money, and that is all they are worried about. They are backyard breeders, they have litter after litter, it is all about the cash.’”

During this interview, 19 dogs were in the Ross Street animal shelter, barking incessantly, among them two who had been in the pound for two months, facing a death sentence. If all Goulburn dog owners obeyed the law and microchipped their dogs, few if any animals would be impounded. Because a simple scan of a roaming dog’s microchip reveals a number linked to their owner’s address, where the animal is returned immediately without having to go to the pound.

Yet in November, 57 dogs were impounded. 34 were returned to their owners, one was sold and eight were transferred to animal welfare agencies.

A veterinarian had to destroy most of the remaining dogs.

“There are a lot of dogs out there that are not microchipped,’” Anna says. “Microchips are so important, I can’t stress that enough to people.”

Older dogs are more likely to be in the pound. Because people lose interest in them, or surrender them, or leave them behind when they leave Goulburn.

“We don’t euthanise cats and dogs for fun. We are human. We get branded the bad people, but we have a job to do,” the ranger says. “If people were responsible, we probably wouldn’t have a job. We have a high work load, from the time we walk in the door we are go, go, go,” Anna says.

Trained to handle dangerous dogs, Anna has confronted menacing ones, including one in West Goulburn soon after she started in the service.

“He got into someone else’s yard in West Goulburn. He was a big, mixed breed sort of dog,” Anna says. Her two colleagues caught it with catching poles that have a loop on one end. “He came in quite cranky but after a couple of weeks he was our best friend. They can be very unpredictable,” Anna says.

“I grew up around animals, the other rangers are the same, it is not something we just came into with our eyes closed,’” Anna says.

Between 70 and 80 per cent of dogs in the animal shelter are re-homed.

ACT Rescue and Foster test the impounded dogs’ temperament to assess their suitability. Canberra Pooch Rescue and the rangers also help with re-homing, featuring dogs online and on social media.

“People can ring from Queensland, or send emails. That is an example, we seem to get a lot of inquiries from people outside our area,” says Anna, who joined the rangers two years ago, transferring from an administration role with the council’s water and sewer department.

She enjoys the job’s variety and challenge. “We have our good days and other days when we go home with a lot of stress, asking ourselves, why are we doing this?” she says.

Reuniting dogs with their owners, or re-homing them is heart-warming, while helping euthanise abandoned dogs is heart-wrenching. Enforcing the law with heavy fines is heart-stopping.
Some owners can be angry when their dogs have been impounded and test the rangers people skills.

“Sometimes you would like to get a bit cranky,” Anna says. “My aim is not to take it personally, try and talk through the situation, and a little compassion too. I think that helps. It makes them feel it is not a personal attack against them.”

Are dogs the problem in Goulburn, or owners who disobey the law? What is your main complaint about dogs in your neighbourhood?

Have suffered years of crying & barking dogs owners on the booze or bong & never ever walk their animals ! Soo cruel & selfish ! ‘Look at me dog man ‘ he could rip yer arm off .... oh yeah right u hero!!! NOT

Humans are to blame...

This is why I won’t walk our dogs here. Every time I’ve tried there have been loose dogs roaming and the walk has changed from a nice outing with my pups to a stressful escape back home. There are many people in Goulburn who treat animals like trash. There are also some local rescue groups and people that put their heart and soul (as well as $$) into trying to help. Council are by no means as squeaky clean as this article portrays either!

Owners need to be held to account and that definitely isn’t happening for any companion animals!

Owners. No question. Roaming loved dogs who have escaped are the exception not the rule!

Owners!!! No brainer. Dogs are the victims.

Buy from a registered ANKC breeder that provides lifetime support.

How does that solve dogs roaming the streets attacking other animals?

It is a shame actually, I am reticent to get a dog for our family due to so many roaming dogs....I am scared of being attacked whilst walking it. We had neighbours with 3 psycho dogs who never stopped barking because they were not walked. When I confronted them about not looking after the dogs properly I got the whole....they are well cared for, part of the family schtick...it was total BS. That is why it is people who are the problem, owners don't judge themselves harshly enough.

Then the authorities should DO SOMETHING ABOUT IT!! Every single day I see a dopey backyard breeders advertising their newest litter on the Canberra BSS pages. Would be so easy to catch them and actually enforce some penalties but nothing EVER happens and they keep making thousands. ACT ON IT ACT GOVERNMENT- don’t make rules if you can’t be bothered enforcing them!!!

Can’t blame the animals- they are just doing what comes naturally! The humans who bred them, the owners who don’t care enough to give them what they need - they are the ones who should be held accountable! My dogs have always been like family members, part of the pack!

nealg - 10 hours ago
Heavy truck traffic, lack of footpaths and e-scooters not a good mix for Mitchell. View
show more show less
*Results are based on activity within last 7 days

Louise and Lou Lou: a winning team at Goulburn Courthouse