bacon on the run

On Friday morning I was alerted to a piglet walking along College St Belconnen.

Having the box brownie to hand i snapped off a few shots. one of which shows a small piglet, fossicking in the bush next to ahem the AFP buildings in Belconnen. 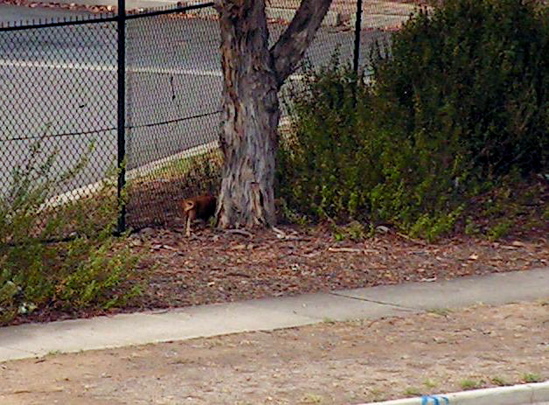 This morning I was told that three AFP members were seen trying to catch said piglet late Friday afternoon. They were using branches off trees to try and distract him while another tried to catch him and hold him. I have no information on whether the piglet had been greased.

I expect he spent his weekend rotating slowly over an open fire (unconfirmed).

so did the AFP folks enjoy a nice suckling pig spit roast ?

Yeah, but the Golden Pig.
This one looks mud-brown.

Isn’t it the Chinese year of the Pig?

Maybe the little porker is looking for truffles?

My caption would be: “lah lah la”

We did a massive double take while driving through the Benjamin Way / College Street intersection on Sunday morning. The little pig was still there at 10:15am, snuffling around in the grass.

I’ve seen chickens doing the wild thing on that street.

the ranger was called in the am, but i think they thought ‘porkies’ were being told, you know, pig loose at the afp hq…

not sure if they even bothered to turn up.

Trish Hunt - 44 minutes ago
We just had a week in Canberra visiting our son and we commented on the long grass everywhere we went. I ask if there was a m... View
Robert Curtis - 46 minutes ago
Ken couldn’t happen in the Watermelon Republic of the ACT! View
Amy Clark - 3 hours ago
Kirstin Maree we’ve (well Anthony) has been doing our nature strips and down along the walkway and next doors for a while n... View
News 18

Rick S Tar - 44 minutes ago
Michelle Kwan a better camera and or drone would of captured the moment better. Cyber Monday still has some sales. View
Charlie Williams - 1 hour ago
In my time it was up and down all the time and didn't really seem to have anything to do with local rainfall- pub talk in que... View
Charlie Williams - 1 hour ago
Wayne Lutter don't forget Tim flannery - it will never rain again! View
Opinion 58

The lessons learned in a place where lambs live forever

For all the pressure, Christmas, like life, is still worth celebrating