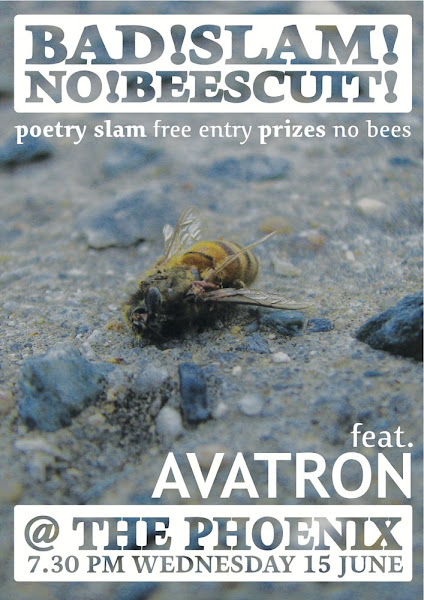 One of my favourite events on the calendar, Bad Slam! No Biscuit! returns to the Phoenix in Civic tomorrow night.

The Fifth Instalment of the Fourth Quadrilogy of the Eighth Trilogy brings you BAD!SLAM!NO!BISCUIT!

BAD!SLAM!NO!BISCUIT! is a poetry slam.

And as the Queen says,

“Have you been playing a long time?”

“It’s all to do with the training: you can do a lot if you’re properly trained.”

“Like all the best families, we have our share of eccentricities, of impetuous and wayward youngsters and of family disagreements.”

Then we get bored as she rabbits on some more and we all fall asleep.

So bring your words, your dramatically choreographed hand movements, your hats and waist coats, your minority reports and thigh high boots, as well as your Duke of Edinburgh to BAD!SLAM!NO!BISCUIT!

According to AVATRON Avatron were discovered on a swamp planet and they are recovering.

WHATEVER YOU DO DO NOT LISTEN TO THE LAST TRACK CALLED “UNLISTENABLE” it is not unlistenable but you will regret listening.

Confused? Us too, if you listen to Paul they were all on drugs, George says they just had a cigarette, but he’s dead and someone will no doubt try and make you listen to all their albums in order as some kind of educational process that they think you need but didn’t ask for, well I went to school so shut-up Grandpa.

Mark J Avery - 13 minutes ago
Try working next door to this dumping ground!! View
Roger Kropman - 4 hours ago
This is a disgrace but it reinforces the point that rubbish dumps / tips should be free to dump your trash, otherwise idiots... View
Nick Savino - 8 hours ago
CCTV and fine View
News 12

Patricia Russell - 2 hours ago
Could have been done so much better. View
chewy14 - 2 hours ago
Acton, I don't agree that an audit might only find minor fraud, but it's debatable. It will definitely find that the scheme w... View
Acton - 3 hours ago
A review will find some minor fraud but the main rort was the whole scheme itself. It fails on equity and efficiency grounds.... View
Community 51

Mark Johnson - 6 hours ago
If it’s not licenced what’s it doing on a roadway anyway … View
Julie Macklin - 11 hours ago
Alicia Conley The ACT has no cycle paths. They are shared paths. Yes, those around the lake were built with people on bikes i... View
chewy14 - 12 hours ago
"That they are public doesn’t mean there are no rules for using them." Exactly my point. That the rules should preclude cyc... View
Community 16