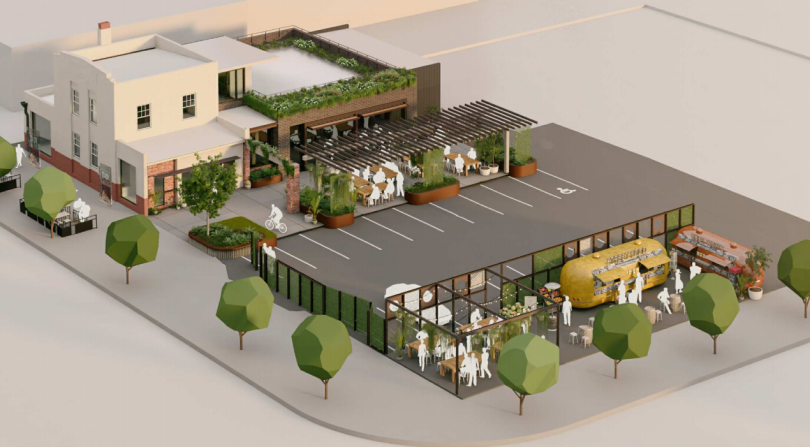 An artist’s impression of the Coggan’s Bakery site development in Braddon. Image: May + Russell Architects.

The heritage listed former Coggan’s Bakery building in Braddon is set to be transformed into a new bar and dining experience in the hip inner-city precinct.

Developer Anthony De Marco has lodged a development application (DA) for the site on the corner of Mort Street and Elouera Street, currently home to Wilson carpark and vacant commercial space within the existing building.

The DA proposes to demolish part of the existing non-heritage structures and add an extension from the heritage building, creating the capacity for two to three tenancies on the eastern third of the site.

The new single-storey structure would have total floor space of 465 square metres, a ground-floor dining room and a rooftop terrace on top of the extension.

An entry courtyard will provide outdoor dining options, while on the other side of a central 19-space carpark, there will be strip fronting Mort Street for food trucks, pop-up stalls, and tables and chairs.

The dining room and pergola-covered courtyard will be able to cater for about 40 to 50 patrons, and is expected to operate Monday to Saturday. 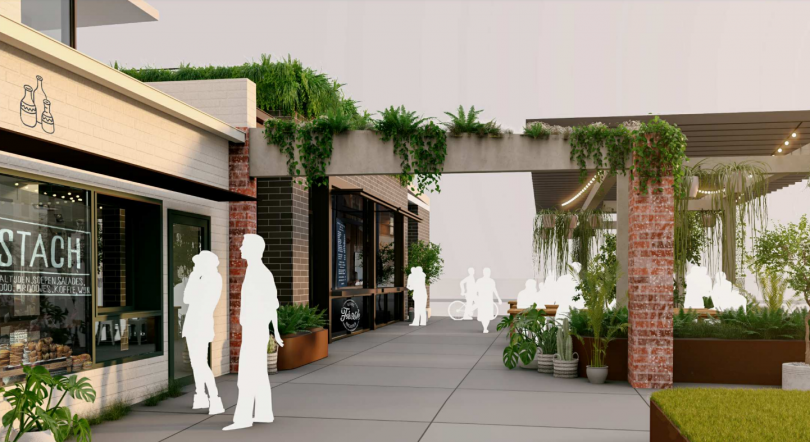 An artist’s impression of the view from Elouera Street of the Coggan’s Bakery site in Braddon showing the entry and courtyard. Image: May + Russell Architects.

The structures to be demolished were added in recent years, but an original red brick pier and concrete lintel beam will be retained and used as the entry portal to the proposed courtyard.

The bakery chimney will also be restored to its original state.

The DA says the proposed works have been designed to complement and retain the heritage values of the bakery building.

“The proposed development will highlight and enhance the Coggan’s Bakery heritage building, while the proposed temporary uses will attract activity to the site,” says the DA.

It says the development will bring to the fore a “previously unnoticed monument of Canberra’s history in the heart of the rapidly developing Braddon precinct”.

The building was heritage listed in 2011 and is important as evidence of a bakery established in the formerly named Federal Capital Territory in the 1920s, which operated continuously until 1991.

It has a special association with the early planning and design of Canberra.

“Where once there were many buildings of similar construction, it is now one of few reminders of the 1920s origins of the area, and is an important historical marker in the streetscape as the most historically distinctive structure in the Braddon light industrial area,” says the heritage listing decision.

The site has a cleared block on one side and car wash on the other.

I like the car park aesthetic…. But I’m probably odd

Excellent news, much nicer then another apartment block

Bridget Sullivan James Gaughwin – this could be nice!

Barbara Sullivan twist my arm, we all might need to have a drink there when it’s done!

Looks awesome. Do they really need to keep that parking though?

James Nichols yes, yes they do, as not everyone is living in the Braddon area.

The Heritage building is staying and they are adding on where the car yard was,it’s very exciting and I’ll be there when it’s opened ❤️

Just what is needed in that area! 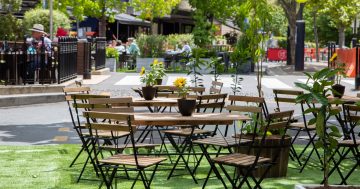