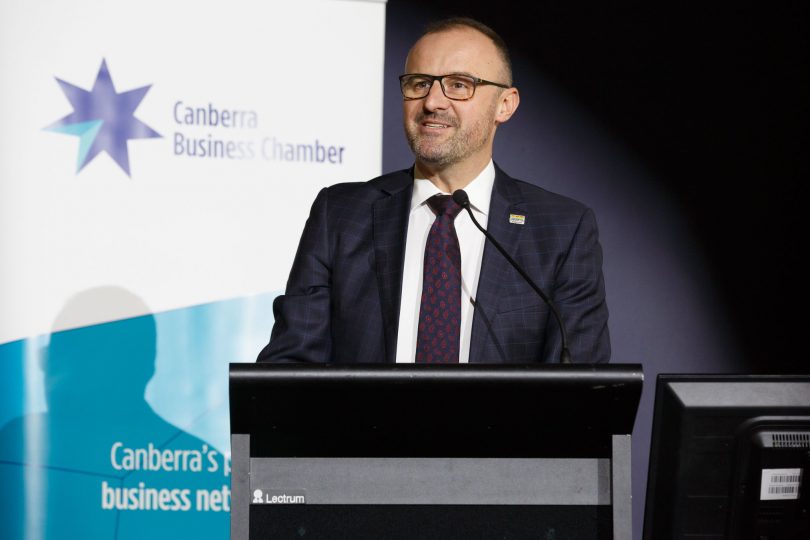 “Canberra is not like other places, and we don’t want it to be,” Chief Minister Andrew Barr told a full house at the Canberra Business Chamber’s annual State of the Territory business update, ahead of the ACT budget in several weeks’ time.

Mr Barr staked his claims for a successful economy on stability, low unemployment, high growth and a diversifying ACT business sector. “We are not immune from risk, but fundamentally we are strong for the challenges ahead,” he said.

But while Mr Barr made much of his government’s achievements in transport infrastructure and the growing knowledge and innovation economy, he also flagged his expectations that a change in Federal government would have significant economic and investment benefits for the ACT, describing the current Coalition government’s agenda for the national capital as “minimalist to non-existent”.

Referring to Labor’s promise of $200 million for Stage Two of the light rail project, Mr Barr said: “having a Federal government that’s interested in actively participating is better than one that refers to the Canberra bubble.”

He also pointed to fundamental changes in the local economy, where now around 60 per cent of the population works in private enterprise, adding that on a per capita basis Canberra is a national leader in service exports, while international education, tourism and hospitality continue to experience strong growth. Mr Barr said the government expected to meet 2020 tourism projections one year early, so strong had been the growth in that sector.

Continued funding has been allocated for the Canberra Innovation Network in the budget and Mr Barr said the ACT was continuing to build competitive advantages in innovation and technology. “Pursuing a more diverse economy will build resilience. That means that we get growth right,” he said.

In addition to servicing a projected ACT population of 500,000 before 2030, Mr Barr said that regional partnerships and collaborations are a growing priority for a service hub that meets the needs of 800,000 people across the Capital Region.

Future projects include Stage 2 of light rail to Woden, and the budget includes funding for the Woden Bus Interchange to begin building capacity for the integrated network.

Mr Barr also mentioned the government’s expanded investment in public housing. “Having a secure job and somewhere safe to live helps people plan for their future,” he said.

The chief minister also ruled out residential development in Kowen Forest despite that area being part of the area originally reserved for housing, highlighting the need to preserve Canberra’s unique character and liveability.

Mr Barr said that Canberra had to ask itself what its reasons for growth were and that these must align with environmental values and the public good. Warning that there was a risk of “urban sprawl”, Mr Barr said the government would make 70 per cent of new housing urban infill, while the remaining 30 per cent would take place in existing new suburban developments in Gungahlin, Molonglo and Ginninderry.

“Growth is an opportunity. If we get it right, we can look forward to working to deliver a better Canberra for generations to come,” he said.

Canberra Business Chamber CEO Michael Schaper said that he was particularly heartened by the Chief Minister’s recognition that almost two-thirds of Canberrans now work in the private sector and that the city’s economy was changing.

“There are some initiatives that will have to wait for the Budget to come down, but he’s articulating a common goal of trying to make sure this is not only a liveable city but different to every other city.

“We’ve got to have a business sector integrally linked into the broader community, that provides opportunities to use the skills we’ve got so that our kids can work here and build their futures, and so that people don’t see coming to Canberra as a tour of duty, but are prepared to stay here as the city grows.”

As the ACT government starts taking over playing fields and EPIC for development, I can only wonder what support the community will give.

Mr Barr is mismanaging the growth of the city. He refuses to do the analysis required to establish what greenfields areas should be developed, to investigate housing preferences, to examine where and how much re-development should occur,or investigate whether light rail is the best option for the the inter town transport to Woden. As a consequence the pattern of development is likely to be suboptimal and imposing major cenvironmental, social and financial costs. The question is why won’t he do the necessary analysis. Is he afraid it won’t support his development bias?

“Different to every other city” he says?

Canberra is looking more like larger cities in Australia every day with the same planning problems.

Desmond Woods - 8 hours ago
I am the Navy’s Bereaved family’s liaison officer. I should be pleased to be in touch with Sheryl so I can offer to get p... View
Joey Heeps - 9 hours ago
R.I.P mate View
Jennifer Elsey - 11 hours ago
Such sad news❤ View
Opinion 116

Kimberley Wilson - 8 hours ago
It’s worth noting as well that ~52% of the ACT is gazetted “protected area”, e.g. national park, wilderness area, natur... View
Monica Tiffen - 9 hours ago
Space is needed for Homes, Children, relaxation, and privacy!... View
Robyn Holder - 10 hours ago
Eventually we will die and someone will come and clear our huge garden and 100 trees and even more shrubs and squash two hous... View
Food & Wine 23

Rachel Fox - 10 hours ago
Gin and Tonic icey poles 😜 View
Stephen Saunders - 15 hours ago
A lovely guy who made our town a nicer place and gave pleasure to so many. I'll be back for one more memorial taste. View
Opinion 6

Steph&michael Weber - 17 hours ago
Congratulations Sally and Rod for creating such a warm and welcoming venue in the midst of COVID. Your support of live music... View
show more show less
*Results are based on activity within last 7 days