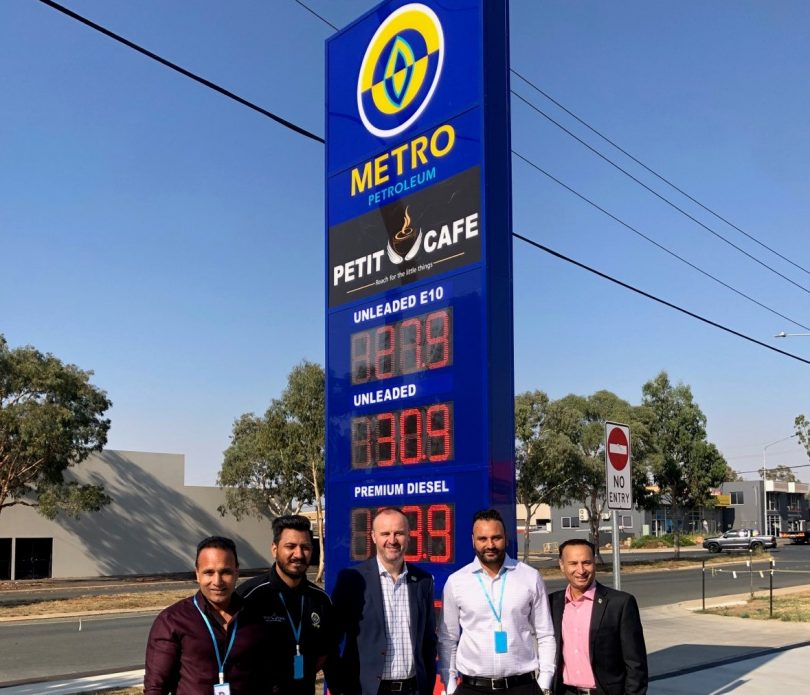 A fuel price watchdog, attracting more independent operators and potentially extending the FuelCheck price monitoring scheme from NSW are part of a suite of measures announced by the ACT Government to increase competition in the Territory petrol market and ease motorists’ pain at the bowser.

The government says it will establish an oversight body to monitor the ACT fuel market, encouraged by the fact prices went down during last year’s two inquiries.

It has also reached out to independent retailers, saying it will assist them to identify potential sites in the ACT, new and old.

A spokesperson said talks were already under way between Puma Energy, Budget Petrol, United Petrol and the ACT Planning Directorate after Chief Minister Andrew Barr wrote to eight of the major independent retailers in December.

“There has been keen interest with retailers seeking to set up in the next six to 12 months,” the spokesperson said.

Despite initial concerns about the feasibility of a price monitoring tool, the government is now open to the possibility of adopting the NSW FuelCheck scheme in light of last year’s Legislative Assembly inquiry.

“We are exploring whether the NSW FuelCheck model could be expanded to the ACT at a cost-effective price. We will make a decision on implementing it in the ACT following consultations with NSW,” the spokesperson said.

“We are only considering fuel price monitoring that operates in real time, not models that lock in retailers to set a daily price.”

The government will also conduct an education program so drivers can understand how they can influence competition by shopping around for the best price.

“It’s no secret that Canberrans were paying some of the highest petrol prices in Australia,” he said.

“We are taking a range of actions to increase competition and improve fuel price transparency in the ACT, as outlined in the Government’s response to the Assembly inquiry.”

“I have written to the NSW Premier to seek her agreement, which would help Canberrans decide where to buy petrol and keep retailers honest,” he said.

The government would also commission ongoing analysis and reporting on the ACT fuel market to increase transparency and place a continuing eye on fuel prices in the Territory.

Two major inquiries were undertaken into the ACT fuel market in 2019 – by the Legislative Assembly and the Independent Competition and Regulatory Commission (ICRC).

“It’s no secret that Canberrans were paying some of the highest petrol prices in Australia,”

Which is really baffling, because everything else in Canberra is cheap as………

Sigh! The annual “Canberra Fuel Pricing Ripoff” campaign off to an early start and like all the others will achieve nothing. Next month be on the lookout for the annual artists impression sketch of Northbourne Avenue as seen from City Hill/ditto Constitution Avenue from ditto where a master plan is envisaged to make these thoroughfares more human-centric and to signify the “city gate” concept. Yaawwwnnnn . . . . .

I regularly buy diesel in tiny country towns way out west or up in the mountains for up to 20c/L cheaper than I can in Canberra. The old “transport costs” argument is a lie. Until penalising adding the Canberra tax and identifying it as price gouging is implemented, nothing will change. Stop wasting money on inquiries and actually do something about it. You don’t need a million dollar inquiry to drive out of Canberra into Queanbeyan or Cooma and notice the huge price disparity.

Barr is just trying to divert attention from rates to petrol. It’s no secret that Canberrans are paying some of the highest rates in Australia.

For many of us who own a home, rates are a bigger proportion of the budget than petrol. Rates have also been increasing by 10-11%pa, far more than any petrol price rises.

We can reduce petrol costs by driving less, but the only way we can control this local government’s cynical and exploitative increases in rates is to vote them out.

Simply put it’s the Canberra tax because the average wage is so high. This imaginary tax is on a lot of things we pay for.

Gertraud Bell - 16 minutes ago
Chris Montgomery people are planting eucalyptus trees in their gardens, not realising how big they grow or that they are pron... View
Martyn Noakes - 1 hour ago
Brian Ashcroft have you been along the cycle track along the creek in Evatt and Flynn, huge eucs with deep roots in covered a... View
Chris Montgomery - 2 hours ago
Brian Ashcroft they only blow over cause their root system is higher than they should be. Most eucs that blow over are on fro... View
Sport 1

@the_riotact @The_RiotACT
Meet Joel Tyrrell - who after touring the world playing #music is now operations manager at the new @TransitBar https://t.co/v9SjttwQjF (46 minutes ago)