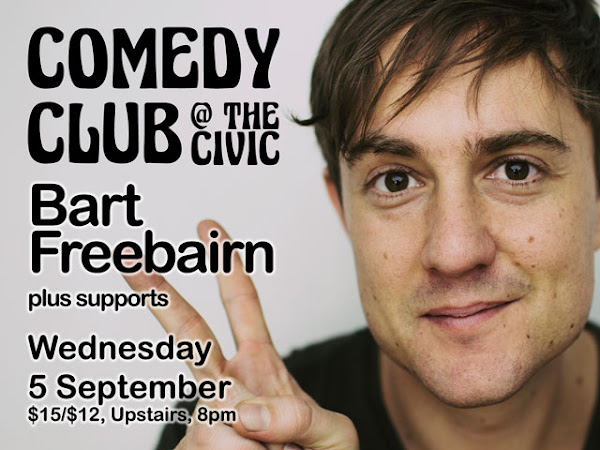 Bart Freebairn has been around the comedy scene for a little while with appearances on Triple J, Abc and The comedy channel. No stranger to the Australian Comedy circuit Bart has brought his fresh left of centre style to Melbourne comedy festival and Adelaide Fringe Festival. People who work at Newspapers have said some very nice things about Bart but don’t take their word for it. Come and see for yourself.

” …the tales flow like a dolphin whipping it’s head in and out of a wave..”
The Herald Sun – 4 stars

The show will be hosted by Jay Sullivan, with supporting sets from Hamish Hudson, Simon Bower, Craig Harvey and Paddy Hornby.

Tickets $12 pre-booked online from www.comedyact.com.au, or $15 at the door.

Richard Grainger - 51 minutes ago
That building is simply storage. The cost that the Archives desperately need funding for is to digitise the records. A lot of... View
Louise O'Donnell - 8 hours ago
Yes that is the repository, or storage area. The files (paper, digital, and so forth) need to be stored somewhere safe and en... View
Lori J Tas - 15 hours ago
Bet the ALP wont do anything either 😒 View
Community 1

Kimmy Hunter - 1 hour ago
Well your very lucky because I had a family member told they can’t access nsw health and had treatment refused View
JC - 3 hours ago
Christian your $35 is not a co-payment that is you paying your doctor more than what Medicare pays then. The proposed co-paym... View
Crystal Darmody - 4 hours ago
Kimmy Hunter I'm currently in Sydney with my son and yes I'm an ACT resident. Not for an ENT but a service that is limitedly... View
Food & Wine 12

Jodie Sharples - 2 hours ago
Julie Warren this answers our questions from yesterday View
Amy Stewart - 12 hours ago
Mark Turner this is what we drove past… View
Michael Bailey - 12 hours ago
Laura Ann this weekend??? Maybe Sunday recovery meal…… View
Opinion 15

chewy14 - 2 hours ago
JC, $60million a year for one stage of light rail that services a tiny minority of the population. With the government commit... View
Margaret Tuckwell - 2 hours ago
Nobody owns the whole buildings, but individuals so hard to enforce rules. View
Kriso Hadskini - 3 hours ago
The highways that approach are a disgrace too. So much large rubbish on every approach road to Canberra. Its embarassing. Peo... View
Food & Wine 11

Tyson Powell - 3 hours ago
Tyler Greening look at him doing so much more View
Sarah L Yoong - 3 hours ago
Great story which many of us can relate to. Well done Alan! View
Michael Rose - 5 hours ago
Congrats Alan for owning your story and the business! All the best View
News 62

UPDATE 11 June, 9:45 am: The ACT Government has announced that the ChooseCBR scheme has been paused for seven days...
News 65

Some of Canberra's southern suburbs and the Brindabella Ranges will be in the eye of a very strong blast of...
Opinion 48

@The_RiotACT @The_RiotACT
A 29-year-old woman will face numerous driving charges after a serious crash south of Queanbeyan that led to a passenger having a leg amputated https://t.co/S0Fhm1Zhsu (17 minutes ago)

@The_RiotACT @The_RiotACT
The @NatGalleryAus plans to renovate its grounds and gardens which it says are no longer befitting of a national cultural institution https://t.co/gr04AD29T3 (22 minutes ago)

@The_RiotACT @The_RiotACT
A sexual assault survivor explains how she was inspired to speak out about her domestic abuser by #AustralianoftheYear Grace Tame @TamePunk https://t.co/oI3MbK5gAZ (1 hour ago)