Be transported by virtual reality Indigenous dance experience at NFSA 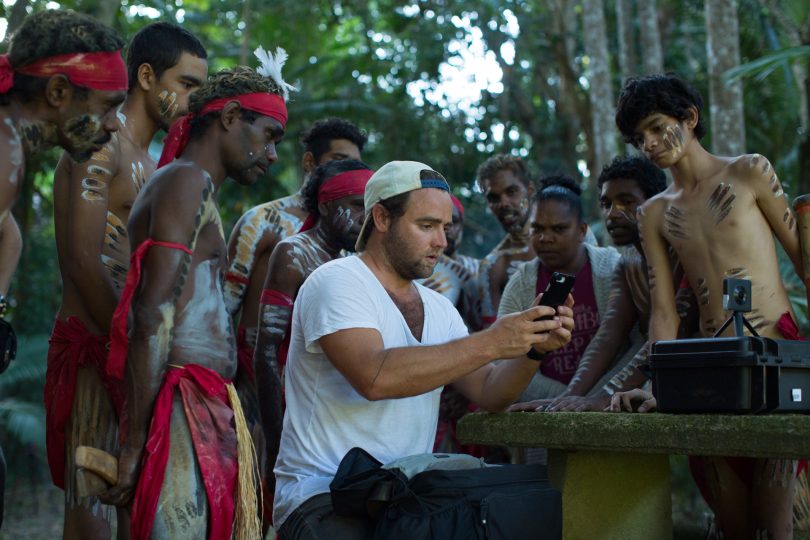 Director Dominic Allen with performers of the Mayi Wunba dance group from near Kuranda in North Queensland. Photos: NFSA

Dance has been called the first and common language of Australia’s many different First Nation peoples but the stories it tells are little known outside of the land from which they have sprung.

The ancient and modern have combined to allow anyone to sit on beach, desert and bush, beneath dunes, rock and forest amid the rhythmic clapping, stamping and singing of people practising their culture and bringing their stories to wherever you may be.

For Canberra, that’s the National Film and Sound Archive where a new virtual reality film, Carriberrie, has opened, that celebrates Indigenous song and dance in locations across Australia, some of which few will ever visit.

From a work by Bangarra at the Sydney Opera House to Uluru and the Arnhem wetlands, Carriberrie showcases a stunning range of locations and performances, allowing viewers to be immersed in these environments and in close proximity to the artists.

The film’s genesis was a life-changing moment for director Dominic Allen when he saw a ‘sorry business’ dancer at Gunbalanya in east Arnhem Land, Joey Ngannjmirra, who performs in the film.

“I don’t think I’ve witnessed that level of power and agency through a single person singing and dancing before,” he said.

Inspired, he reached out to different Indigenous groups, cultural custodians and film bodies such as Screen Australia about a project to take that experience to the rest of Australia.

One might think it would be a project fraught with challenges but in 20 years of filmmaking, he had never experienced an easier process. 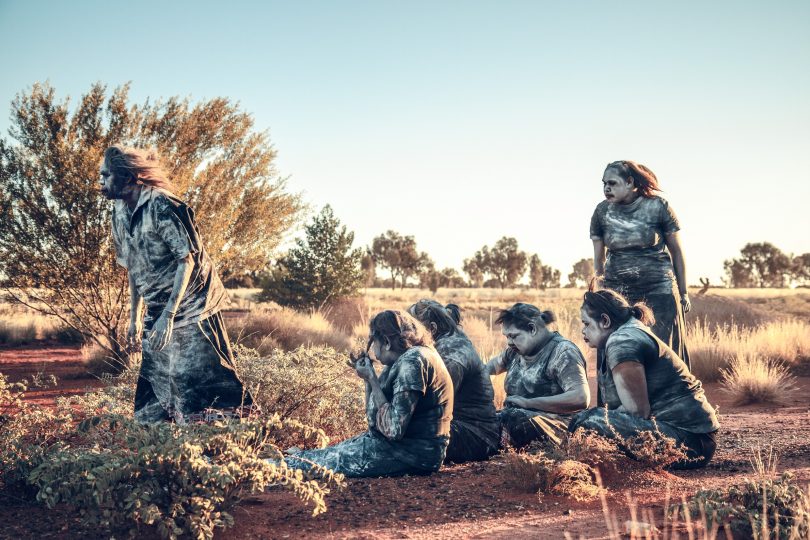 Anangu Women from Uluru Mitijulu in the Northern Territory.

Delta Kay, a Bundjalung woman from Byron, who also performs in the film, said Allen followed the right protocols, was honest and had his heart in the right place.

“So it felt right when he explained the project to us, and I explained it to my people and they were excited,” she said.

“We’re all different, all these dancers from around Australia, we all know that Aboriginal people are all different. We’ve got our own languages, our own customs and laws, but we’ve got something the same, and that’s love for our land, that’s our duty, to look after our land. Through our dances we tell our stories, we become one with our totem, we respect the spirits of our animals, that’s what dance does for us, we connect with our ancestors, we dance and massage our mother’s back.”

Indigenous people wanted to share their culture and for Allen, VR offered the perfect medium to transport viewers to country for an on-the-spot experience like his.

“This project is an expansive wonderful journey into traditional and living First Nation culture in this country,” he said. “It really paid witness to a really robust an impressive and beautiful culture that I’ve been blessed to get a little bit closer to over the process of making it.

“I think a lot of Australians are fascinated and we’d all love to get out to country and to know more about the wonderful culture that’s been there for so long. And dance is a really great way to be able to communicate and understand that together.”

He said the film was an introduction for people to go on a journey around Australia to places they can’t go to in order to meet people they can’t usually meet, and to have a face-to-face real personal experience with those cultures, practices, songs and dances.

“You can almost touch and feel these people, you can’t stand on the stage with Bangarra in real life but you can now. And you can’t go to east Arnhem land without an invitation or a permit and you can now. There’s wonderful sharing you can do through VR and that’s why we chose it,” he said. 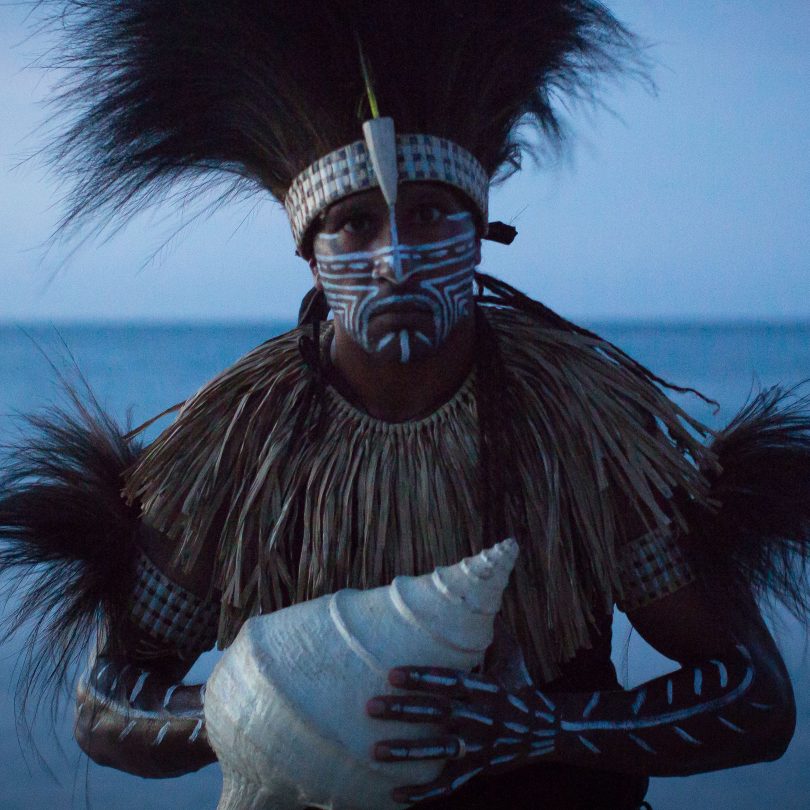 Viewers can experience it through VR headsets sitting in swivel chairs for the full 360-degree experience, interactive screen, iPads or app.

No stranger to Indigenous experience after spending time at Fitzroy Crossing as a young man, Allen said making the film had only reinforced his respect for First Nation people’s connection to country.

“After travelling around the country and seeing nine more groups now, and seeing these practices, it’s really cemented my confidence, my deep respect for the integrity and power of First Nation culture in this country,” he said.

NFSA Deputy Chair Wayne Denning (a Birri Gubba man) said sharing Indigenous culture in digital platforms and innovative ways was one of the most important things the country could do.

“The more young people, old people and Australian society share in that the better we are,” he said.

NFSA CEO Jan Muller said it made sense for the NFSA, as the guardian of the visual heritage of this country, to present this VR film.

“As the custodians of a significant collection of Aboriginal and Torres Strait Islander works, we believe in the power of stories to transcend cultural boundaries and build a deeper understanding and respect. Carriberrie achieves all of that, using cutting-edge immersive technologies, which the NFSA is now collecting and preserving, alongside traditional audiovisual formats,” he said.

Sam Oak - 1 hour ago
Ken, but the other 50% is usually taxed at the highest tax rate of 45%. Add the fact that normally your deposit to buy the ho... View
chewy14 - 7 hours ago
"And that’s exactly my point. The ordinary Australian family is not expected to have financial nous which makes property su... View
Food & Wine 1

Futureproof - 2 hours ago
Vote early, vote often. Will voter ID solve this?... View
kenbehrens - 3 hours ago
Stephen, as it turns out, School ID cards are a thing, if you work in a school you'll need a Working with Vulnerable People's... View
franky22 - 6 hours ago
I take it that the 55 senators are part of the nutjobs still claiming that the election was stolen from Trump ? View
News 2

Frank Spencer - 2 hours ago
Leaf litter makes the best compost. View
TimboinOz - 2 hours ago
Leaf-litter!!! At home? Buy a 2 or 3 layer worm-farm and start gardening. Even if it's just for salads until Autumn. And, eve... View
News 3

Futureproof - 2 hours ago
The roundabout at Monaro Highway/Isabella Drive is particularly dangerous with the height of the grass. You should be able to... View
Capital Retro - 3 hours ago
That would be tantamount to the cosseted cyclists in Canberra who get free bike tracks and then complain that they can't use... View
bigred - 3 hours ago
Of course, both sides of politics could encourage interested and motivated residents to "adopt a patch" and reduce the total... View
News 1

Helen Roberts - 3 hours ago
I welcome FOGO in Cook. We are more able to separate food scraps. For example I have found that the coffee capsules we used t... View
Scott Harvey - 3 hours ago
Most people don't buy organically grown fruit and veg therefore the scraps aren't organic either. You cannot add non organic... View
Lifestyle 19