Best of Canberra Taste Off: Cakes

For the cake taste off, Flute in Fyshwick drew the most support with Ricardo’s in Jamieson the challenger.

I should start out by confessing that I love cake. I do however say that with one caviat. I like ‘real’ cake. The spongey, floury goodness of a bouncy cake. My favourite is carrot cake closely followed by chocolate cake. I kind of miss old fashioned cake as it doesn’t seem to feature on many menus anymore.

That being said, I decided to go with chocolate varieties at each location and went ahead on a mission in sugar and all things sweet.

First up, I tried Flute. I had initially planned to present both cakes at my mum’s birthday, in turn killing two birds with one stone. But, as it was on a Sunday and Flute is only open Monday to Friday, I figured a two day delay may see a decline in cake freshness. So, I was forced to sample the Flute cake on my own. I went with the chocolate profiterole cake and it’s a good thing I took the photo early on. I had every intention of waiting for my husband to return from work before cracking into this baby, but the gorgeous looking profiteroles were calling me to pluck them off and pop them in my mouth as I fussed about the kitchen. The cake is a layer of chocolate sponge topped with chocolate mousse and then a layer of profiteroles. Topped off with some chocolate sauce and chocolate shavings it is in no way for the feint hearted. It is sweet and rich. It is also delightful. The profiteroles are light and mousse is smooth. A real treat, it would be perfect for either a celebration cake or dessert for a dinner party. Just don’t order it too early or like me, you may turn it into a chocolate cake with no profiteroles prior to serving. 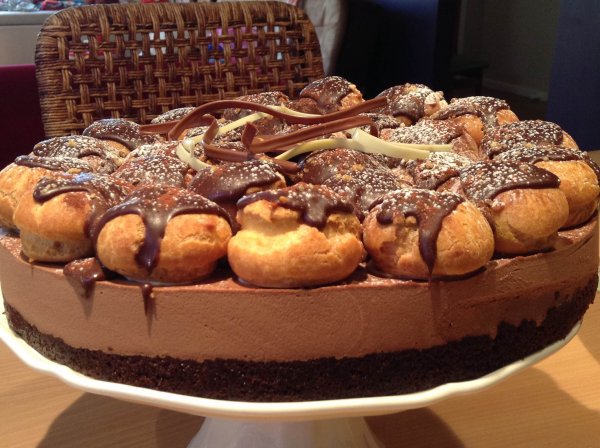 The Flute cake was $40. I pre ordered it in store and collected it no problem. The challenge of purchasing is the store opening hours (8-3 Mon-Fri) and parking, but not enough to put you off as the end result is a triumph.

The second cake was a chocolate caramel mousse cake (gluten free) from Ricardo’s. I ordered this online, selected my pick up time within the half hour (7 days a week) and paid with a card. I was pretty impressed with this system. The cake was more expensive than Flute at $60 for the same size (although the Ricardo’s cake was taller), but beautifully presented. Covered in chocolate dusting and little chocolate ‘pebble’s on top, it was certainly appealing. 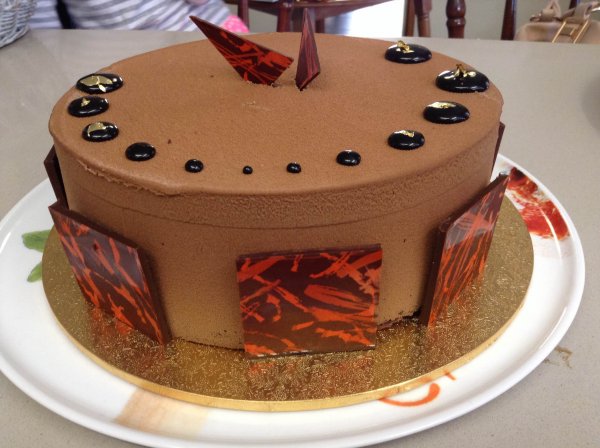 This cake ended up as my mum’s birthday cake so I had many an opinion to work with. We sliced into the cake to find it predominantly chocolate mouse on a thin sponge base with a thick layer of salted caramel running through the middle. I started out serving what I thought were small serves but as the thick caramel oozed from the centre, people started requesting smaller pieces. Of the 12 people sampling the cake, only one finished their piece. It was rich, very rich. My sister is the biggest chocoholic I know and this cake was even too much for her sweet tooth. It would perhaps fare better with a dollop of ice cream and some berries to cut through the chocolate, but it wasn’t a winner for us.

I guess it’s no great surprise the Flute is the winner. They have become a well-known name over the years and I must say, I can absolutely see why.

5 Responses to Best of Canberra Taste Off: Cakes
Filter
Showing only Website comments

Ricardo’s are superb. +1 for them

I’m nearly dribbling looking at the profiterole cake. Might have to try that one!

I love the cakes from the Flute but the lack of credit card facilities when you are paying such a high price for the cakes is off putting in these days of credit over cash. sadly I stick to buying the snack sized ones and go elsewhere for event cakes.

Agreed, The Flute got the balance right. Wishes Ricardos’ team review its formula, it seems everything has salted caramel and 1kg of sugar per bite in their sweets, over priced and rated.

Good choice , Sorry but Ricardos is overrated and trying to be a washed down version of Adriano Zumbo I have tried many from Ricardos and one thing is missing is taste. Flute is hands down the winner aside from the parking.

assiduous - 2 minutes ago
Yes, the ACT Labor/Greens government has deliberately driven up the price of land by withholding it from the market. View
Community 19

JC - 40 minutes ago
There not demolishing more than they build/buy. Biggest issue is they are not building/buying enough to keep up with demand.... View
consumeradvocatecanberra - 3 hours ago
Good on you Mark for stating the bleedingly obvious. What I would like to see is evidence based figures from Housing, prefera... View
Trish Casey - 4 hours ago
Elderly people and those with disabilities are put in ACT Government house and then for gotten or bullied by maintenance View
News 2

Helen Prior - 10 hours ago
About the roads.Enough traffic. already. View
Motoring 34

Capital Retro - 11 hours ago
David Ward, when you say "there should be massive incentives to buy and own these things" you really mean "subsidies" don't y... View
Opinion 66

Julie Macklin - 16 hours ago
Linda Stapleton I rode to work in the rain. I had wet weather gear to wear. Well, I did until into my 50s. Then I began to ta... View
Stephen Harris - 20 hours ago
Julian Hayes thenif it increases their costs but not their profits then they will stop doing what they are doing and do it di... View
show more show less
*Results are based on activity within last 7 days

The Best Dessert Delivery in Canberra

The best bakeries in Canberra

The best fine dining in Canberra

@The_RiotACT @The_RiotACT
A major landslide on a regional road between Moruya and Braidwood, in southeast NSW, has virtually landlocked residents, including health professionals who work in Canberra and farmers who rely on Sydney markets to sell their produce https://t.co/GlU9KD5e97 (29 minutes ago)

@The_RiotACT @The_RiotACT
Access Recycling is reassessing its future in Fyshwick and may move to Goulburn in the wake of legislation blocking its proposal https://t.co/e59RVT1RYZ (59 minutes ago)