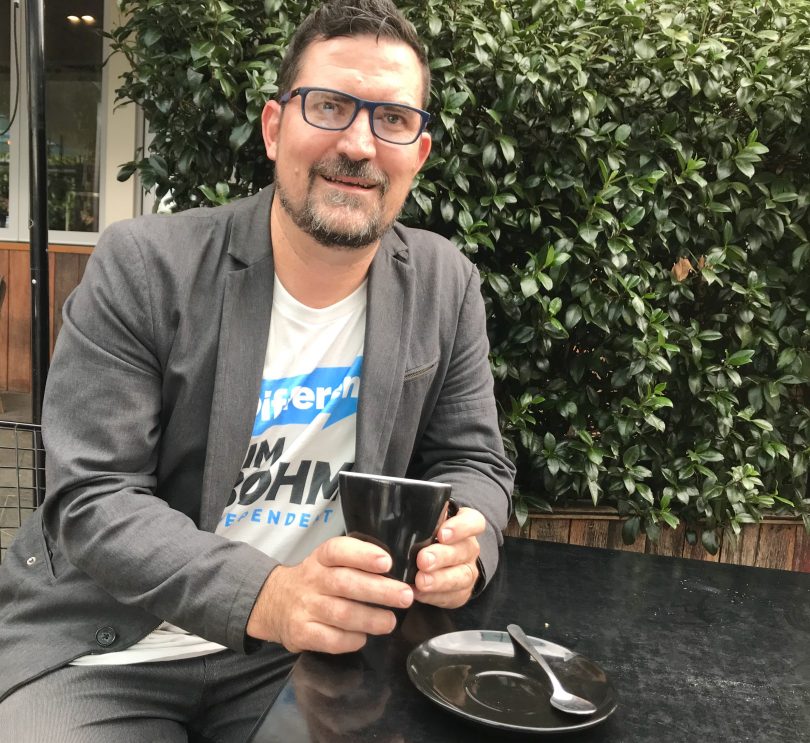 Tim Bohm is running as an independent in the seat of Canberra. Photo: Genevieve Jacobs.

Tim Bohm, perennial election candidate is at it again in the seat of Canberra. He is entirely independent, entirely self-funded and has mustered up enough money this time for a whole nine corflutes (he’s offering a prize to readers who actually see one).

The former Bullet Train Party leader is having his third run at electoral representation. When asked why he’s doing it, he’s quick to reply that his wife keeps asking him that too. But, he says, “I still want to make a difference and I’m sick of Canberrans being ignored or taken for granted.

“I think the political system is even more broken than before. A great example is the two leaders they’re making us choose from – two leaders nobody wants to choose from, which is a direct result of being taken for granted.”

Jokes aside, Bohm is well aware that he’s probably not going to be the next Member for Canberra. What he wants is to make voters think about whether they can make a difference and shake up the status quo.

“It’ the right time to be an independent. Take for example Kerryn Phelps and the Medivac bill: within a few weeks of being elected, she’d actually got something done. Canberra has had Federal members for a very long time who have achieved very little.

“I have no alignment of any kind. I don’t like any of the parties. I’m asking voters not to see if I’m Labor or Liberal or Green in disguise, but to consider voting different this election”. 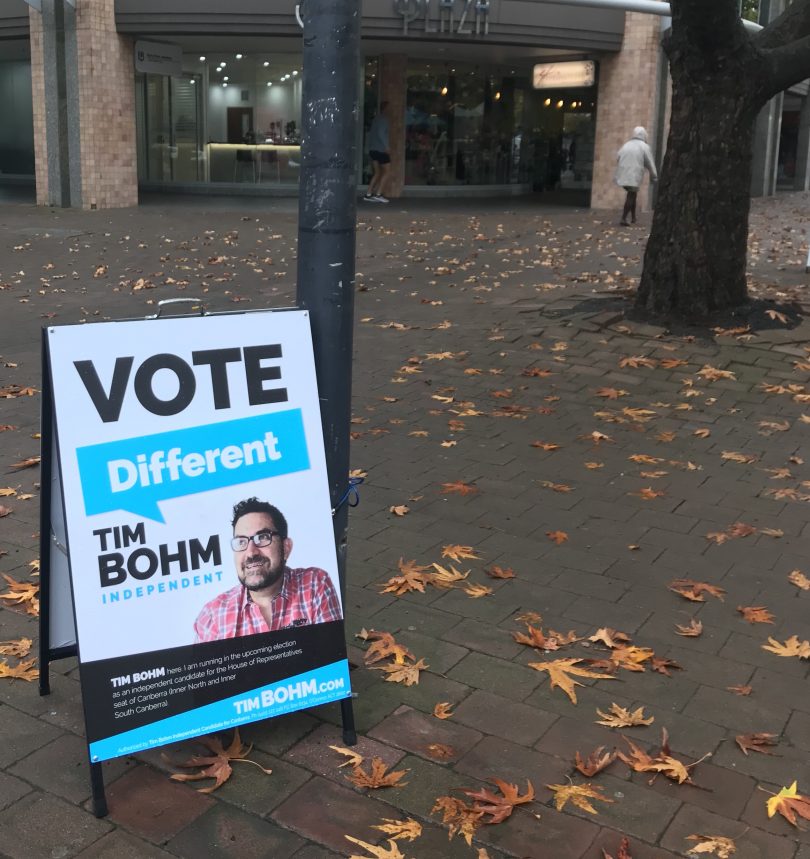 Handy hint: one of the nine Bohm Corflutes is in Civic. Photo: Genevieve Jacobs

One of Bohm’s major policy planks is direct democracy. He doesn’t want to give the people a vote on everything but thinks they should be consulted on major issues of national importance, pointing to the longrunning Swiss referendum model.

“As bad as the plebiscite on marriage equality was, as terrible as the question was in the first place, the actual process of taking part in democracy empowered everyone,” he says. “I think the time is right and voters in the seat of Canberra could be the leaders of direct democracy in the country.”

He’s still on about fast trains, quipping that “we campaigned hard for a 57-minute ride to Sydney, and got a slow train to Gungahlin”. And he wants to abolish the fuel tax, which he says isn’t spent on Canberra’s roads and will be made increasingly redundant and unfair by electric vehicles.

He’d also like fixed terms for parliamentarians, arguing that if you can’t make a difference in nine years, you shouldn’t be there any longer.

Bohm says his platform comes from the family “brains trust”, from his experience as a business owner of 15 years’ standing and from talking to the local community. He takes credit for the idea of an integrity commissioner, which he says his Party raised first before it was adopted by other ACT politicians.

“My rationale for running is that you can create momentum behind ideas that are worthwhile. I have three kids growing up here. I’m born and bred in Canberra and I want the place to be as good as it can be.”

He won’t be exchanging preferences with anybody, guessing that everyone is smart enough to work that one out for themselves. He’s never garnered enough votes to receive electoral funding. He’s relying on word of mouth to get his message out and his kids to help with the corflutes.

When asked what he thinks will really happen in a fortnight, Bohm instantly declares with a grin that he’s going to win (and if he does, I offer to make a public act of contrition for casting doubt).

I wish you were on the Bean Ballots Tim.

Thanks The RiotACT and Genevieve

Election season is in full swing, but my enthusiasm still hasn’t arrived

If you’re complaining about corflutes, spare a thought for the minor parties

@The_RiotACT @The_RiotACT
The derelict Commercial Hotel in #Yass is under new management, as the major shareholder of Public bar in #Manuka takes over https://t.co/ss9NhiJQLa (51 minutes ago)