Brumbies 41-23 over the Chiefs in Canberra 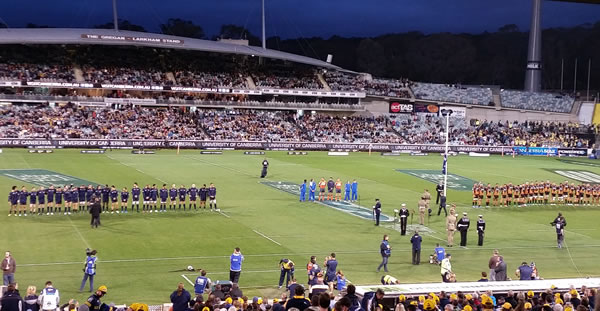 The Brumbies took revenge over the Chiefs for last years grand final loss by belting them 41-23 tonight in Canberra.

Leading 13-6 at the break, Tevita Kuridrani’s double, plus some free flowing rugby from man of the match Matt Toomua, cemented a solid win.

The bonus point win put’s the Brumbies in second place, just one point behind the Sharks. The Brumbies face the Crusaders in Christchurch next week.

It was even better because the over hyped Waratahs lost before hand and the Force won as well. Don’t worry though they are still going to finish in the top 2 according to the Sydney hype, although quite how with only 1 game against the Rebels left I’m not sure 🙂

Agree, good game but those two need to be booted, they speak too fast, she has a voice that would peel wall paper and is largely un-intelligible. Get someone decent to do a proper job. This is not day time radio.

Not only was it a great win for the Brumbies but it was a really good turn out. The best crowd in quite a while. Maybe due to the marketing of the Aus V NZ teams on ANZAC Day (not to mention grand fnal replay) or perhaps because it was a reasonable kick-off time of 5:40pm.

It’s a shame the ANZAC occasion was ruined by the bimbo and bogan ground announcers who were even noisier than usual and sabotaged the attempt (which they would have known about) of the Ruckus supporters to give the bird to SANZAR and sing the respective national anthems. Not sure if they did it because they were told to do so or they were just overcome with the occasion and their own self importance.

Oh well I guess the bogan and bimbo must appeal to a majority of Brumby supporters otherwise why would they have punted Cam Sullings – who actually used to demonstrate some knowledge of the game – as ground announcer?

Rob Thomas - 33 minutes ago
I walked into the street, the on coming traffic was about to strike me, luckily I decided I'm physics blind. View
Richard Orchard - 45 minutes ago
So only white people can be racist right? It’s the white people who have to read this article, and repent I’m assuming? A... View
Peter Marshall - 1 hour ago
I that's entirely fair, but I think the issue of racism is primarily about the dominant culture/ethnicity. In Australia that'... View
Community 3

Susanne Gardiner - 6 hours ago
Didn't talk to them, but was one of two families on a playground... The other was Hugh Jackman and his son. View
Maya123 - 10 hours ago
Ah yes, but have you seen surveys of what is attractive to women? It's not as tall as you might imagine. Every survey I have... View
Capital Retro - 13 hours ago
I exchanged "hello's" with John Wayne in a Hong Kong shop 50 years ago. He was a tall dude - 1.93m to be exact. I just checke... View
Lifestyle 2