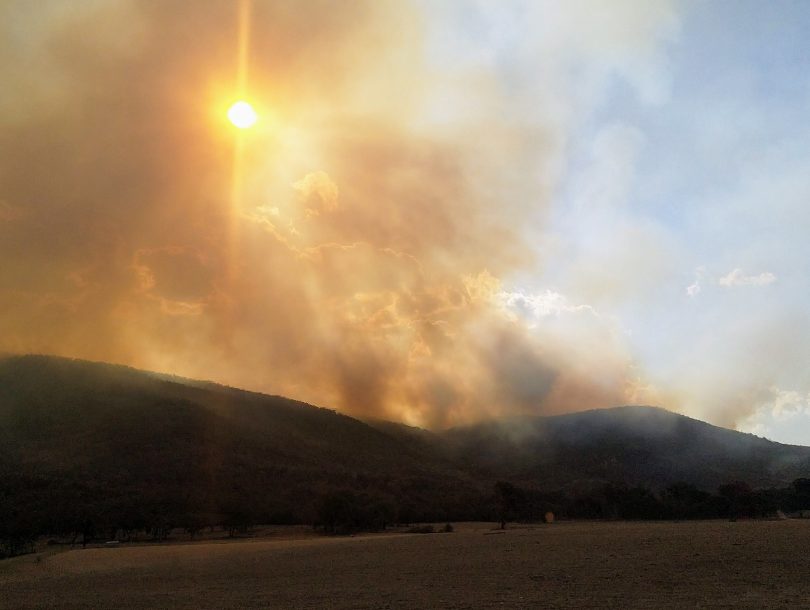 UPDATE Tuesday, 4 February 9 am: The Orroral Valley fire was downgraded to an advice level early this morning.

The fire is still classified as out of control and has burnt 68,508 hectares.

“Crews will take advantage of windows within current weather conditions to strengthen containment in the north, west and south edges of the fireground,” an ESA spokesperson said.

The Clear Range fire and Calabash fire to the south of the ACT border have also been downgraded to advice, after the latter was escalated to emergency last night.

Both remain out of control.

The fire is spreading in an easterly and northeasterly direction under southwesterly winds as of 7 am this morning, the NSW RFS says.

Currently there are 62 bush and grass fires burning in NSW, 29 still to be contained. Easing conditions has seen all fires now at the Advice alert level. More than 1,500 firefighters will use favourable conditions to work on containment of a number of large fires today. #nswrfs pic.twitter.com/oSsJoQxUTz

Smoke from the Orroral Valley fire will likely linger around the ACT today off the back of the strong southerly wind change last night, the ESA said.

Monday, 3 February 5:45 pm: The Calabash fire, just south of the ACT border, has gone to an emergency level as the fire spreads easterly and northeasterly under strong southwesterly winds.

Spot fires have started to the east of Colinton and west of the Strike a Light Nature Reserve as a result of the Orroral Valley bush fire in the ACT.

The Orroral Valley fire has also been upgraded to watch and act as fire activity begins to increase on the north and western front, Emergency Services Agency (ESA) Commissioner Georgeina Whelan said.

People in the Calabash Road, Tinderry Road, Egans Road and Naylers Lane are being told by the NSW Rural Fire Service (RFS) to seek shelter as the fire approaches.

“I issued a Watch and Act at 4 pm for the areas of Tharwa and southern Tuggeranong. This is due to the increasing southerly wind conditions,” Commissioner Whelan said.

“The southerly change hit Cooma at 5 pm with winds of 45km/h and gusts of 60km/h. This is stronger than what had been predicted by the Bureau of Meteorology.”

Commissioner Whelan says that the Orroral Valley fire is expected to breach containment lines to the west tonight, but stressed that this is very far away from Canberra’s urban interface.

There are 45 vehicles stationed on the fire ground while crews at the bottom of Mount Tennent are preparing to directly attack the blaze if necessary.

There are also crews stationed in Tharwa and south Tuggeranong.

The Orroral Valley fire is no closer to Tharwa or south Tuggeranong, and has grown to 61,394 hectares in size, she said.

Fire activity has increased along Corin Road, and is 1.2km from the Corin Ski Resort. Commissioner Whelan says that the ESA spoke to the owner of the resort, who informed them that he is well prepared and ready to defend his property.

ACT RFS Chief Officer, Joe Murphy, says that there is no threat to southern Tuggeranong.

The Clear Range fire, just south of the ACT border, has also been increased to a watch and act level.

The ACT will continue under a State of Alert for rural areas. More information will be added as the situation continues to unfold.