Caleb on course to get his life-saving kidney transplant 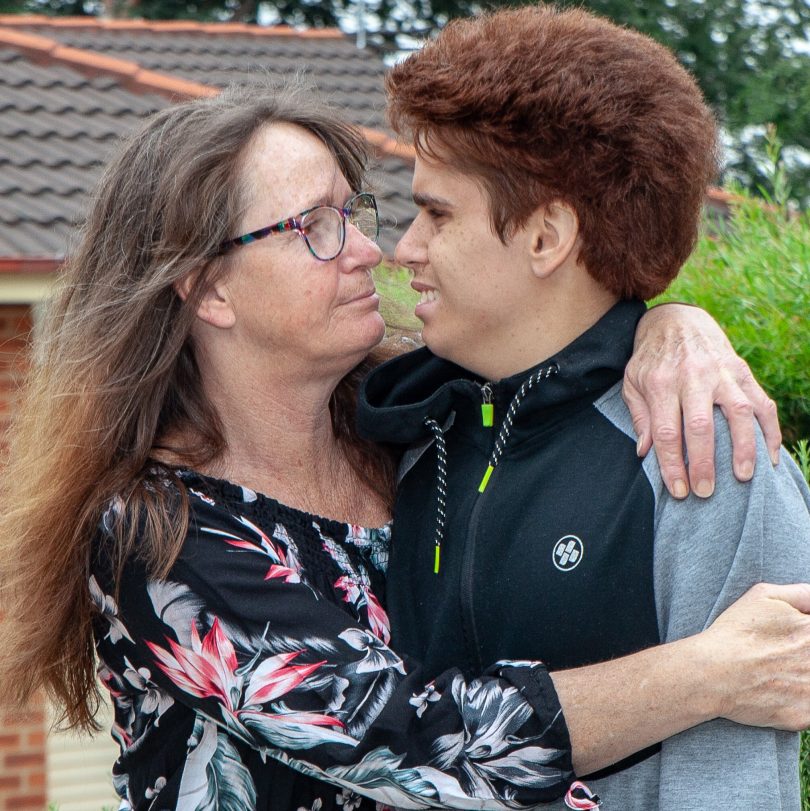 Young Caleb Browning is on course to receive a life-saving kidney next month after the Region Media brought attention to his predicament in January.

Caleb, 17, of Palmerston, has only one failing kidney, autism and ADHD, and had been told by doctors last Christmas Eve that he only had a few months to live, without dialysis and an eventual transplant. But he did not fit the criteria for dialysis because he could not sit still enough and sedation would further damage his kidney, and without dialysis, he could not be put on the transplant list.

After advice from a friend, his desperate mother Leanne approached the RiotACT with nothing to lose, and says the turnaround is unbelievable.

On the day the story was published, doctors at Canberra Hospital told her the case had been reassessed and they were recommending a transplant without having to undergo dialysis, which Leanne believes is a first.

They were sent to Westmead Hospital in Sydney for tests, which extended into a second day.

A dental examination will check that he doesn’t have any infections that could carry to the kidney when it is transplanted.

He will then be placed at the top of the list and go to Sydney for the transplant in about a month.

“It’s a big relief. I just can’t believe that it could have been turned around like that,” she said.

She said Caleb was very excited. “He’s telling everyone that he’s getting a new kidney,” she said.

But his condition continues to deteriorate, with fatigue increasing and mood swings worsening.

Leanne is aware he is not out of the woods yet and the risks have been explained to her – that the transplant might not take, tissue could die and the need for medication afterward.

“I’m really pleased at least we’re getting a chance,” she said. “Without the RiotACT‘s help, I wouldn’t have changed any minds at all. But they seem to think it’s going to move very quickly.”

Good luck Caleb and Leanne. Fingers crossed for a healthy transplant, and no complications. Best wishes from me and Jessica

All the best for Caleb 🙂 so happy to hear this news!

Look good for him. But as someone who has just been through 5 years of hell waiting for a transplant for my wife and dealing with her going through dialysis. I find this very unfair that people can jump a que of equally if not more sick people who have been waiting for up to 5 years or more.

Why can’t the other people who have been waiting for years get jumped up the list. I know many many will not agree with me but as this Australia I am allowed my own opinion and allowed to express it.

Craig Cooper we donated our young brothers organs last year here in Canberra and we are more than aware the people who received his organs had been waiting a long time on a list like your wife. I hope she gets her gift soon. I don’t know why this story seems strange that it would be said he is on track for next month as don’t think anyone can predict such a thing. I hope that there is no line jumping. 🙂 good luck and all the best.

Jan Moon thank you and your family for the lives you changed. My wife has received her gift of life but waited in the line for her turn. While we waited she saw people die while waiting and people loose the will to continue do to the struggle.

If he is receiving a love donation great 👍 but if he is jumping the que I think it’s wrong as you said.

Thanks again for your families gift of life to many.

Tegan McInnes and it is a long long road for the people already on the list.

But hey as I said good luck to him. Considering a lot of times after the transplant you need dialysis to clean the toxins before they attack the new kidney or just to get the new kidney working. So interested how that is going to work?

There is a lot more to the transplant than a 5 hr surgery that people don’t think or know about.

Craig Cooper all due respect to your family and your situation. I can’t personally know how frustrating it is.

But I do know Caleb. He was at TCH nearly four years ago at the same time as my daughter, and he was in a lot of trouble health wise then. He’s fought his whole life.

His situation is unique, and pretty much unpredictable.

He’s not jumping the queue. He can’t have dialysis before the transplant , which pushes him forward on the list.

It’s not ideal. It’s something that his mother feared to happen. In an ideal world, no one would have to suffer so long. I wish the best for your wife. But I hope that you can feel a bit of joy that Caleb may get better. There’s also the risk he won’t get there, or it won’t take. But at least he can have a chance.

Best of luck mate, lots of people on your team

All the best for a great recovery Caleb.

It should never have even been a question, good luck Caleb xx

Canberra showing its generosity in more than a million ways