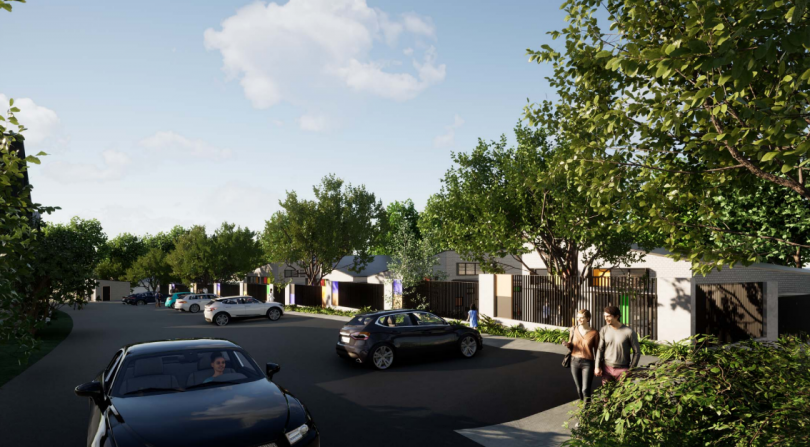 An artist’s impression of the Anglican child care centre and car park proposed for the St Luke’s site in Deakin. Image: Cox Architecture.

The Anglican Church’s child care centre proposal for its St Luke’s site in Deakin is too big and will cause traffic chaos in the quiet residential streets around it, according to the residents’ group.

In a development application submission, Deakin Residents Association president John Bell said the 120-place proposal should be scaled back.

“A smaller-scale development with a reduced footprint of the buildings on the block would provide a healthier environment for the children, reduce the traffic-parking problem, and would not cause such a large disruptive incursion into this peaceful residential suburb,” Mr Bell said.

Mr Bell said parking is an ongoing problem in Deakin’s narrow streets, which he explained are not designed to carry the morning and afternoon peaks of traffic that the proposed ELC will contribute to.

“Why should local residents be inconvenienced when parking outside their residence is not available for visitors and tradespeople?” he said.

“Yet this is what will result if the proposals in the ELC Traffic Report are adopted. We already have situations in Deakin where parking has had to be limited to one side of the street in order to enable traffic flow.”

Spill-over from the Deakin commercial areas into residential neighbourhoods has been a problem pre-COVID and the approval of a new building at the Equinox Business Park means the Wilsons car park on Kent Street will no longer be available when work starts next year.

The DRA expects tradespeople working on the Equinox site will again cause parking problems, and the ELC as currently proposed will only exacerbate these.

Mr Bell said the DA’s Traffic Report overstates the amount of parking in nearby streets, and when business returns to normal there will be far fewer spaces available.

He said staff and visitors alone will require 31 spaces, not the 23 that has been calculated.

It is assumed that arrivals and departures from the ELC will be spread over a two-hour period, but the experience at the nearby Grey Street ELC shows it is more likely to be intense 15-20 periods that will result in cars backing up, Mr Bell said.

He said the on-site provision of drop off parking is totally inadequate.

“The limited on-site parking for the proposed ELC arises in part from the extent to which the site is to be covered with buildings,” Mr Bell said.

Sam Randall - 49 seconds ago
There seems to be a lot of people bitter about the CHOICE they made, now they direct their anger at the people who made the r... View
Camille Martin - 13 minutes ago
Milenko-Slavenka Jovanovic then what is it to you either? View
HiddenDragon - 25 minutes ago
It would be easier to take seriously the federal government's utterly over-the-top reaction to Djokovic's stance on vaccinati... View
Opinion 142

Errol Jobsz - 38 minutes ago
$10 million won't go far on that road. View
Brett Griffiths - 2 hours ago
Excellent! It’s the best bypass road, onto Jerangle then Bredbo, for when the Monaro highway is shut down, as it was recent... View
Topher Garlik - 2 hours ago
10mil that will fix the pot holes, if they serious can double that 💰 View
News 3

Farhan Khaliq - 43 minutes ago
Colin Parton story for your next book 😝 View
David Malcolm - 48 minutes ago
Well, isn't that ironic. View
Stephen Walker - 55 minutes ago
About time - dodgy to the core. We were lucky. View
News 5

JC - 49 minutes ago
Is it the place of government or media to commemorate someone in that way? Whilst I cannot imagine what it would be like to l... View
Futureproof - 58 minutes ago
I have COVID and in isolation. I needed to see the doctor for another matter, but couldn’t due to being infected. So now, I... View
kenbehrens - 2 hours ago
There seems to be a trend to talk down the loss of someone to Covid, by referring to them as a number, minimising the signifi... View
Lifestyle 20