ACT Floorball Association is hosting the inaugural Canberra Floorball Open showcasing the talents of current men’s and women’s Australian players from the ACT and NSW.

The Canberra Floorball Open is on this weekend the 8th & 9th of October at MPowerdome Sports & Recreation Centre (56 Coyne Street, Fadden, ACT).

Men’s teams from the ACT, Newcastle and Wollongong will be competing, including current Australian players that competed in the Floorball World Cup in Finland in December 2010.

Free come & try sessions will be held at 9am and 11:30am on the Saurday and again at 9am on Sunday.

What is Floorball?
Floorball is an exciting European indoor sport – a fast-paced game that blends some of the greatest elements of hockey and ice hockey. Teams compete with five players plus a goalkeeper on the court at a time. It has been called a thinking game, with speed, skill and technique more important than brute strength or intimidation. 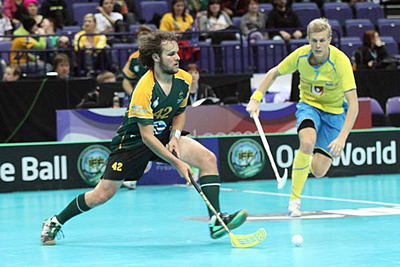 Floorball is growing quickly across the Asia-Pacific region and has more than 300,000 official players and an estimated 4 million recreational players worldwide.

As of 2011, Floorball has been recognized by the International Olympic Committee, as well as being included in the World Masters Games. Australia has participated in the World Floorball Championships a number of times and an Australian Team won bronze in the 2011 World Transplant Games.

Michael Cameron - 2 hours ago
Bill McIntyre Wrong,, our systems are more closer to the pig! View
Valerie Foster - 3 hours ago
Because they just can’t mind their own business as we don’t try to force them to eat meat. View
Dean Newman - 4 hours ago
Geoff Langridge so do plants, even more than animals. You won't believe science anyway. Plants, seeds can feel think about th... View
News 26

Elysha Fordham-Young - 4 hours ago
Where is the Waramanga one please? I can't find it. View
Business 8

Chris Sherlock - 5 hours ago
Jorge Gatica i suppose you’re one of those people who thinks that road levies pay for roads. You know it all goes into the... View
Aloysius Devander Abercrombie - 5 hours ago
i think i get her point, something isnt perfect and theres some way its technically "not green" so bugger it lets all go back... View
Les Rice - 6 hours ago
Canberras electric is not 100% renewable....it was 100% renewable one afternoon a month ago for 2hours......The solar doesnt... View
Sport 7

Archie Mac - 13 hours ago
My uncle told me in climbed the fence as he couldn’t afford to pay. Said he walked in just in time to see Bradman walking o... View
Louellyn Violet - 1 day ago
How about the Giants playing in the snow? View
News 23

Lucian Burca - 22 hours ago
Elizabeth McLennan in the last 6 years while I was flying with Qatar and Emirates it was metal cutlery on board. View
Opinion 4

As COVID-stranded travellers continue to return home, Canberra is doing its bit by taking two planeloads of returnees this week....
Opinion 43

We're all in this together. That's been the mantra for 2020 - the year that's brought almost every catastrophe to...
News 26

Why you need to know Canberra’s Hockeyroo Kalindi Commerford

Why it’s wrong to compare men’s and women’s sport: The case of the UC Caps

@The_RiotACT @The_RiotACT
In this week's Probing the Polls, we're asking whether you think the ACT should have more consistent speed limits. Vote in our poll to have your say https://t.co/6xAEF1iEcC (1 hour ago)

@The_RiotACT @The_RiotACT
There's a big week ahead with TEDxCanberra, a trading car fair, a car show, and the return of Sunset Cinema among the events on offer https://t.co/c6zON8V2x6 (2 hours ago)

@The_RiotACT @The_RiotACT
The ACT Inspector of Correctional Services has detailed a litany of failures in the Court Transport Unit, including unsafe vehicles https://t.co/XwMckH6O4m (4 hours ago)