There is evidence of a softening of the housing market with the latest CoreLogic figures showing a dip in house and unit prices in Canberra. File photo.

Both house and unit prices in Canberra have dipped over the past month, in spite of more favourable conditions, including the certainty of the election result and lower mortgage rates, according to CoreLogic.

The negligible overall 0.2 per cent fall in home values recorded at the end of May by CoreLogic’s Hedonic Index could be discounted, but the 30 June result shows a 0.9 per cent decline, which in the context of the Canberra market is not great but is evidence of some softening.

CoreLogic said that nationally, housing market conditions continued to improve through June, reporting only a 0.2 per cent fall in national dwelling values, the smallest month-on-month decline since March 2018.

The big markets of Sydney and Melbourne, where the falls have been most dramatic, bounced back to positive territory, if only just at 0.1 per cent and 0.2 per cent respectively, while other capitals were still in the negative.

Canberra is only one of five of the 46 capital city sub-regions to record a rise in dwelling values over the 2018-19 financial year, up 1.4 per cent, and over the past five years values have surged 22.7 per cent. Houses are up 2.4 per cent over the financial year while units fell 1.9 per cent. 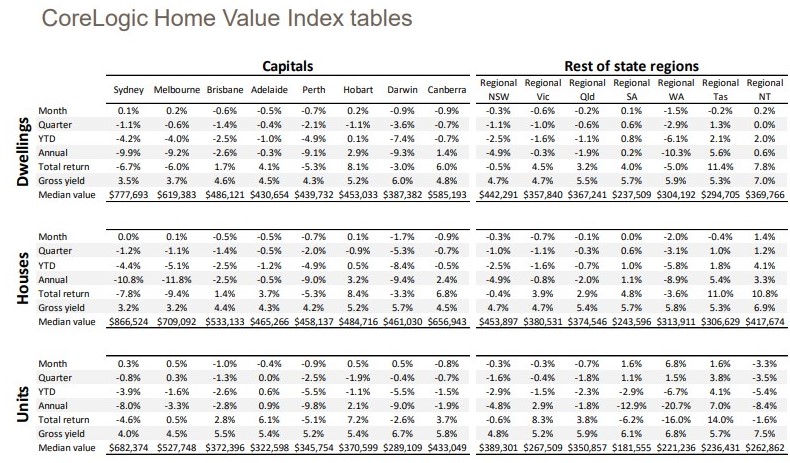 “Stability within the Federal Government, along with the removal of uncertainty surrounding changes to negative gearing and capital gains tax discounts, has brought about increased certainty and boosted confidence in the housing market,” he said.

There had also been improvement around housing affordability, with lower mortgage rates and the high likelihood that interest rate serviceability tests are set to improve. Ongoing strong population growth was also supporting the market.

All these factors plus Canberra’s strong economy and employment suggest the market here will continue to be a stable one. The ACT Government’s abolition of stamp duty for first-home buyers and the Morrison Government’s incentives promised during the election will now also come into play in the new financial year.

Mr Lawless also said auction clearance rates have been holding above 60 per cent in Sydney and Melbourne through June; a substantial improvement relative to late 2018 when clearance rates were consistently in the low 40 per cent range.

Anecdotally, he said real estate groups had reported that numbers for open homes and inspections were up, and lenders were taking more enquiries from potential borrowers. “Overall, it looks like the tide may have turned for the housing market; however we aren’t expecting a rapid recovery phase,” he said.