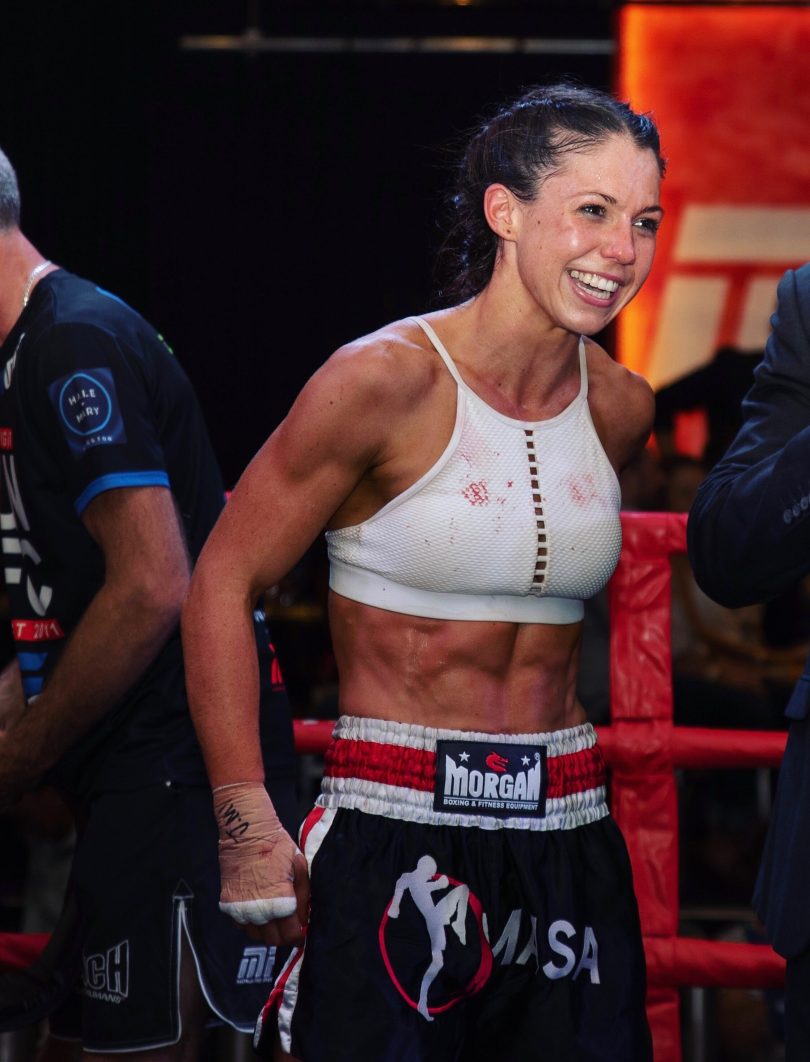 After wrapping up a conversation with Felicity Loiterton, I can’t help but wonder about the demands in her life. There’s the relentless training required to be one of the best kickboxers in Australia, and the hectic domestic life of a working single mum.

Felicity – or ‘Flip’ as she is probably better known – doesn’t do anything half-heartedly. The reality is she tends to do almost everything in the extreme.

At 26 years of age, Flip juggles life as a single mother of three kids – two biological children and the third, her niece, whom she fosters. To make ends meet, Flip works two jobs.

And somehow, through all of this, she also manages her intensive training regime for kickboxing/Muay Thai. 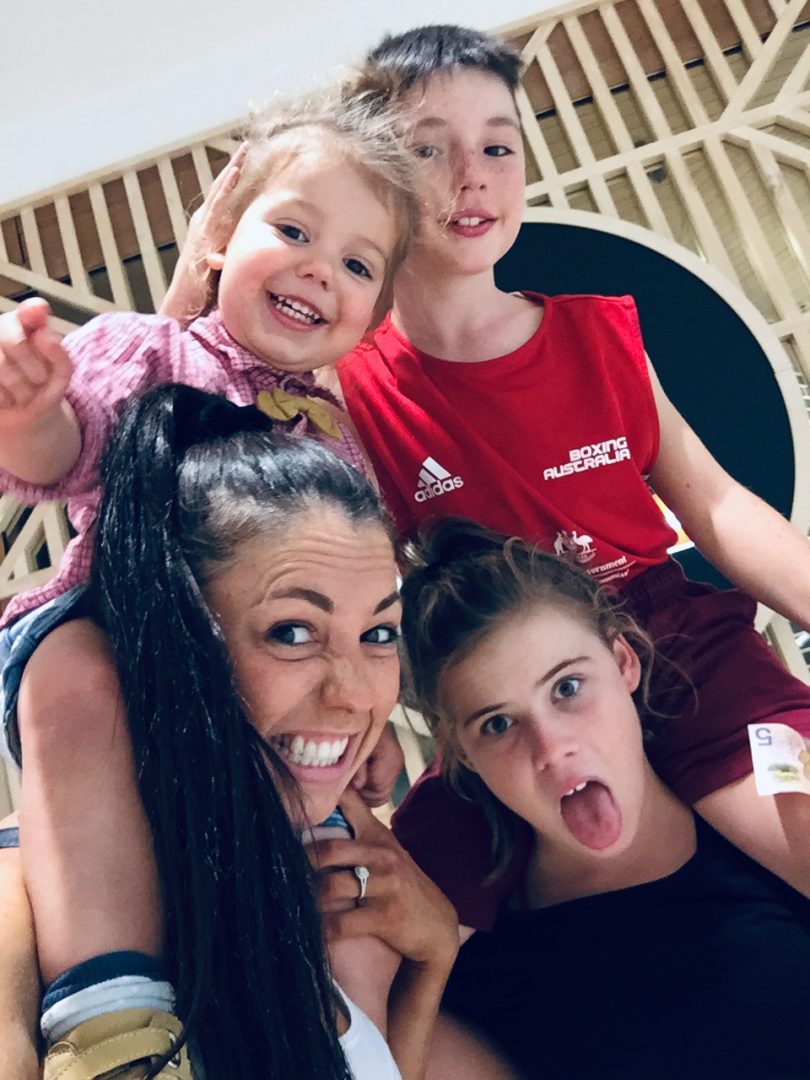 Felicity and her young family.

The alarm rings at five in the morning, six days a week. Coach Peter Foster at Physical Phuture in Gordon then pushes her to her limit in an intense training session. It’s a choice she is willing to make in order to maintain her championship status – as Felicity puts it, “If you want something, you push yourself to the limit.”

What sacrifices does a kickboxing champion with three children and two jobs make, you ask? For one, her social life is practically non-existent. No late nights and constant weight control make a social life difficult to maintain anyway.

Fighting in the flyweight class, which has a maximum weight of 52 kilos, Flip says she is often required to drop up to eight kilos. This is only easy when you say it quickly! The reality is far different, with weight stripped off through strict dieting and intense training, it resembles a Spartan lifestyle. As Flip reflects, “It’s a constant sacrifice, and it can be a lonely sport.”

Her social life revolves around her family and her training group, which includes champion fighter, Ben Thompson. 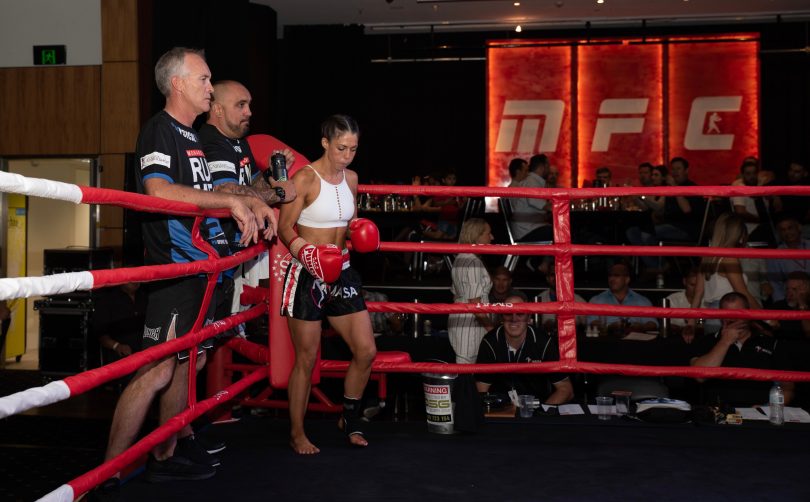 Felicity in the ring.

So why do it? I get the impression she wouldn’t have it any other way.

“It’s a love I have had for a long time. Being a single mum at a young age, it drove me to do something that was empowering,” Says Flip.

And it has grown to become more than empowering, as she wins title after title: From the ACT title to the NSW title, she even possesses the East Coast mantle.

And now, Flip has a chance at the Australian Championship in Sydney on 17 August.

And to get to the Australian title, Flip says it has taken “five years of work. I have sacrificed so much. Words can’t describe what it will mean to me.”

I can’t help but be fascinated with the life and mindset of boxers such as Felicity. Flip says many people are surprised when she tells them that she is a kickboxer, and not just any kickboxer, but a fighter with five title belts.

Many are also surprised when she tells them that she finds inner-peace in the ring; “It’s fierce happiness, that’s where I want to be. I have done all the work, and I have struggled for a long time to get to this point.”

As she prepares to contest the Australian title, Flip says she gains strength from the support of the people of Canberra and is happy to engage via Instagram: @thegirlfromcanberra.

If you support her financially you can be guaranteed to get your money’s worth – there are no half measures with Felicity Loiterton.

Mel Marshall some inspiration for tilly

Vander Leal - 3 hours ago
You had spread city centres with departments and buildings, but that was way too boring, so you ask to put down the old build... View
Andrea Mya Riboust - 8 hours ago
Material for a Utopia episode 😄 View
Shawn Mulgrue - 9 hours ago
I’m glad I work for a small federal government department! View
News 30

Brisal - 12 hours ago
It goes without saying that whatever the minimum standards are, most developers will do all they can to meet only those stand... View
show more show less
*Results are based on activity within last 7 days

@The_RiotACT @The_RiotACT
The Festival of Small Halls is proving to be a lifeline for musicians as it tours 20 rural locations in NSW https://t.co/dJze5LsnrO (7 hours ago)