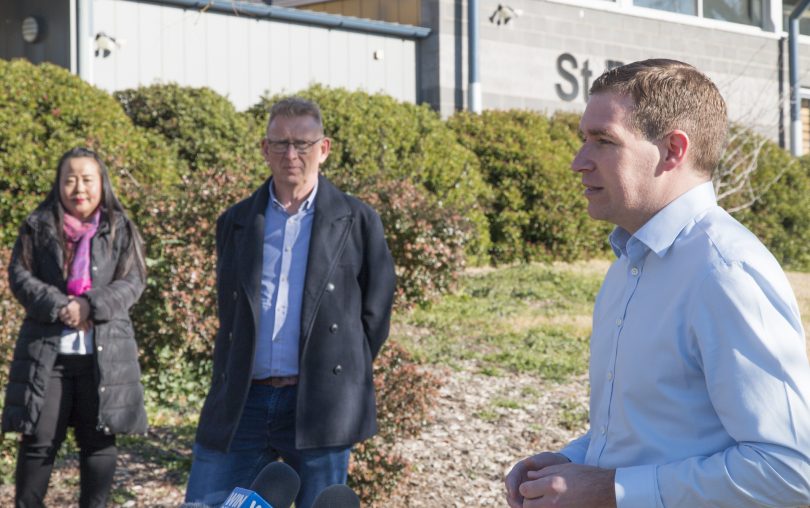 The Canberra Liberals have announced that they plan to plant one million trees across the Territory over the next decade. Photo: Dominic Giannini.

The Canberra Liberals have promised to plant one million trees over the next decade and ensure that every Canberran is within a 10-minute walk of green space if they are elected in October.

Opposition leader Alistair Coe has lambasted the Government for threatening Canberra’s status as the bush capital, saying the number of street and community trees has dropped by 3,000 each year, and the tree canopy has fallen from 30 per cent to 21 per cent.

“We will future-proof the bush capital to ensure a sustainable future for all Canberrans with these real and practical measures,” Mr Coe said.

“The devastating bushfire season and coronavirus has reminded us how precious our natural environment is for the health and wellbeing of local communities.”

Although the policy has not been completely costed, Mr Coe said each tree will come with a $10-20 price tag, but that some of the money would be reallocated from existing funds.

“Even at the ACT Government’s own nursery, there is capacity for this sort of program. In addition to that, we would of course work with the other private nurseys in the ACT and community groups that do a great job,” he said.

“The cost of this program can be born out of many existing allocations, including the operations of the Yarralumla Nursery.”

When asked if residents are more focused on economic recovery and returning to work, Shadow Minister for Planning Mark Parton said the two are not mutually exclusive.

“There is a suggestion that because of the COVID crisis this stuff is going to be less important to people, but I think the opposite is the case,” he said.

“I think [green spaces] have become more important during the COVID crisis.”

The ACT Government announced in February that it is currently planting an extra 17,000 trees in Canberra and has committed to reaching a 30 per cent canopy cover by 2045. 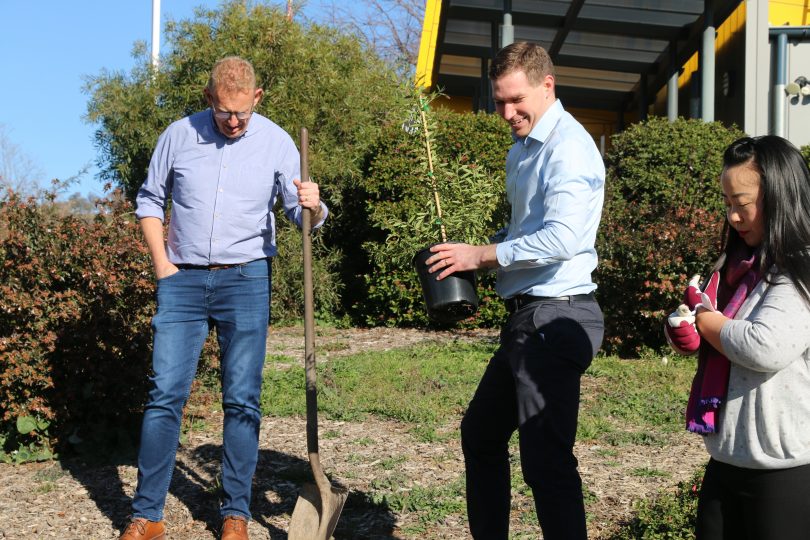 The Government hit back at the Liberals, calling the policy a “half-baked announcement”.

“Already, Canberrans have access to over 500 playgrounds and 880 individual irrigated sportsgrounds,” an ACT Government spokesperson said.

“Fifty per cent of Canberrans live within 500 metres of a nature reserve, and many more live near one of our parks, playgrounds or sports grounds.

“The Government is also providing new public parks throughout Canberra with consultation underway on providing green spaces as part of the new CIT Woden campus.”

Mr Parton singled out the town centres in Gungahlin and Woden as not having adequate access to recreational green areas but said the main concern was that new developments would ignore the environmental needs of Canberrans.

“It is a fact of life that we have many more Canberrans living in apartments now than we had five years ago and in five years’ time there will be many more again,” he said

“The Labor-Greens Government planning vision is for 70 per cent of new dwellings to be urban infill. You walk around new suburbs now and you work out where all of those new dwellings are going to go.

“As we move forward as a city, I think it is abundantly clear that we will have a stack of places that are not within a 10-minute walk of green spaces. It is desperately important that those people have spaces to recreate.”

Mr Parton said the policy would be fully costed before the election, as will any further policy announcements from the Canberra Liberals.

Its also about allowing sufficient space for trees to grow properly, especially in streetscapes.

“We will future-proof the bush capital to ensure a sustainable future for all Canberrans with these real and practical measures,” Mr Coe said.

That might be better achieved by planning policies which require sustainable vegetation (not a bit of token garnish which expires shortly after a building is completed and occupied) to be incorporated in all new developments, particularly higher density ones.

A few struggling saplings in a distant park (or a sad little park-ette) is not going to do much to counter the heat island effect of the sorts of developments which are increasingly common in Canberra.

Likewise, an obsession with protecting trees (even when overly large and dangerous) on single-dwelling blocks, does not compensate for loss of canopy (if it ever existed) in high density development areas – as current practices demonstrate.

This proposal might be a start, but something more balanced and comprehensive is needed.

He’ll need an anti-yobo force to stop the trees being vandalised as well.

Perhaps Alistair Coe MLA should stop “opposing” and come up with some socially conscious policies.

AND MAKE SURE YOUR POLICIES ARE COSTED!

Tired of hearing your statements without costs and how you’re going to fund them.

Randy Goldberg,
This is actually important if we’re going to cope in increased temperatures.

Why would we want to be known as the Bush Capital when we are THE Capital?

Trying to win the green vote 😂

What a joke, liberals love money not the environment

Don’t worry about the type of tree people. Coe wouldn’t bother with trees. He’s just trying to look better than Labor who already have a progam ongoing.

Improving tree canopies, particularly after the recent drought, is a good policy. However, there are more important and effective ways to protect biodiversity and natural ecosystem or “bushland” values. Primarily this involves not allowing new development to remove trees and clear the canopy AND native understorey of woodland and grassland (which incidentally widely spaced old trees is the native ecosystem or “bush” for much of Canberra). The next best thing is then improved investment in ecosystem management and restoration, which will create many jobs and will include tree planting where appropriate.

The requisition of Garran playing fields and primary school oval without community consultation or consent proves that the ACT Greens/Labor party regards all of Canberra’s green spaces as potential building sites.

Oh my complaining about something that is a non event.

What part of temporary don’t you understand? And don’t start with the conspiracy theories that they have built a temporary field hospital just as a way of getting their hands on the land (which they own) as a way of giving it to developers latter on.

As for consultation, again you do realise why it was built and why it was built so fast. Time was of the essence, so hardly possible to go through months and years of community consultation. And frankly where the temporary hospital has been placed is 100% the correct area being so close to the cities main hospital.

If that land is not returned to ovals once the hospital is gone I will eat my hat.

Good initiative. However, stopping the cutting down of existing beautiful trees to make way for large apartment complexes, would probably be a good idea too. Geocon chopped down this tree in Gungahlin sometime in the last few days. The children in our ELC will be very sad when they see it is gone on Tuesday.

Added note – Geocon was approved to remove this tree in their DA, despite over a hundred objections to the DA (including that this was a protected tree.) The notice of decision said there was no other option for Geocon’s designs so they could remove it. How crazy that a private developers design issue was more important than the tree/ the animals that lived in it/ environmental protection/ what the community wanted. We are still fighting Geocon’s amended DA which closes for submissions on 9 June which is to add more units and car parks among other things. See Gungahlin Community Council’s Facebook page for more info/ if you have a few min to make a submission.

Madeleine Taylor serious question how many mature trees were chopped down to build the child care centre, your home and the roads that you use to get between the two?

Ashley Wright I honestly don’t know. I’m not aware of any protected trees on those sites but who knows how long along the roads and my suburb were built. Maybe they didn’t recognise important trees back then like they do now – I think it makes it even more important that we try to stop the same thing happening in the future.

No thought. He talks about $10 tubestock, not the $300+ mature stock with ongoing watering and maintenance that might actually survive.
An odd presser for an odd decision. Not sure what’s going on here.

What sort of trees will they plant? Pine trees, for the building industry? Eucalyptus trees to encourage wildlife to return here? Exotics that won’t burn as fast as pine or eucalpts?
Where will they plant them? In our streets? All new suburbs since Gungahlin are barely capable of having a footpath or a wide enough roadway to cater to cars let alone buses…
Seems a very weak promise.

Michael White They’d have be propagated at Yarralumla, my guess is eucalyptus- cheap as chips, easily propagated, quick growing. I recall being on a team after the 2003 bushfires planting trees and shrubs in Corin after the pine trees burned.
I doubt the Libs will get many votes on this – libs don’t really care about the environment – if they did, they vote for the Greens!

What will the ACT Liberals do to actively contribute to the fight against climate change? More trees is not a meaningful contribution.

Paul Leins it is actually.

Paul Leins urban foliage coverage can greatly reduce the ambient temperature of cities helping reduce heating costs. The million number sounds a bit more like a sound bite number. The current Labor government has a policy for 30% coverage target from our current of like 26% off the top of my head?

It’s good for local action, but set against a federal position of climate change denial, it’s polishing the brass on the Titanic

Paul Leins it is. Best case we need both.

Is it worth having liberal presence in canberra…I mean..the labour party is a sure shot winner everytime

Zahidul Alam you have a lot of people with an understanding of policy and government mechanisms. So if they want to be taken seriously they need to have well formulated policies, with details and evidence. Which they arnt really strong at. Senior Liberal party members at state and federal levels have openly stated they often go on their gut as opposed to using evidence based decision making. People can argue which method they prefer, but in Canberra people are going to favor more evidence based policy.

…and a partridge in every pear tree! 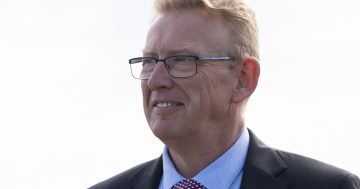