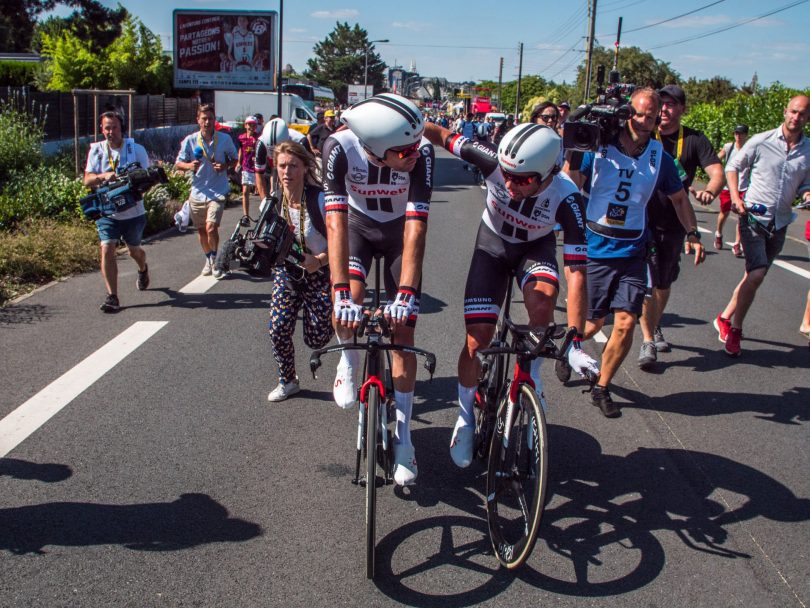 Last year’s green jersey winner has been forced to withdraw from the race. Photo: Supplied

12 months after he won his first green jersey on the roads of France, Canberran Michael Matthews has been prematurely forced to end his Tour de France campaign.

Matthews was struck down by illness on Wednesday morning local time (11 June), vomiting, unable to eat and suffering from a high fever. With no sign of improvement, Team Sunweb decided to pull the pin on his tour before the start of the fifth stage.

His withdrawal from the race is a huge loss for Team Sunweb, a year after the sprinter became only the third Australian – and the first since 2006 – to win the Tour de France green jersey, which many regard as the ultimate achievement for a road cycling sprinter.

Matthews said he will head home to recover and will cheer on his team from there.

“I’m really disappointed to not start this morning,” Matthews said. “I’ve been really ill and tried all I could to make it to the start line, but feeling like this, it’s simply not possible.”

The preparations for @LeTour start months in advance. But sometimes, no matter how much work you put in, things don't always go the way you want them to. We're sad to report that @blingmatthews is unable to start #TDF2018 this morning due to sickness. Feel better soon, Michael! pic.twitter.com/qVV33iwXcY

Team Sunweb’s physician Mannes Naeff said Matthews’ condition worsened as the morning progressed. “We wanted to see how he would feel, but with a high fever we made the decision that it was just not possible for him to take the start line,” Naeff said.

Team Sunweb’s coach Tom Veelers said it was a huge blow to lose the sprinter, who is not only a strong competitor in challenging for day results but also of huge value to the team on the difficult stages.

“We will continue to fight with seven guys and we wish Michael all the best in feeling better soon,” Veelers said.

Jeff Smith - 11 minutes ago
Did you know the small Taylor public Primary school in Kambah is above capacity whilst the nearby combined Primary & High sch... View
Kathy Sepulveda - 2 hours ago
Jessie Nicho I'm a little late to this but I agree with you 100%. All the money is going into the Northside Public Schools an... View
Business 23

Lynda Galt - 45 minutes ago
Good luck it will be great for Yass View
Lyn Smith - 57 minutes ago
They'd better! It would be great to see this restored! View
Neil Thompson - 4 hours ago
Andrew Turnbull, great bloke to get on the piss with as well. View
News 51

Maya123 - 1 hour ago
More realistic of them to accept that climate change is happening and not ignore the research of those working in the field a... View
Jo Hann - 2 hours ago
Christopher Stuart Veilands how do they brainwash kids in schools when they've never been in government and have no say in th... View
Jo Hann - 2 hours ago
Robert Harrop how does a party that's never been in government have enough control over schools to brainwash the children in... View
What's On 1

Lucas Hayden - 2 hours ago
This is one of the best facilities ive ever seen...... I am not a "horse" person but I almost became one just walking around... View
Sport 2

Trish Casey - 2 hours ago
Mark Parton has helped age care and those with disabilities living in ACT housing more than anyone .we have had 3 break ins t... View
Mark Parton MLA - 3 hours ago
It’s my job to help constituents and It’s my job to hold the government to account. I’ll continue doing both. View
Capital Retro - 4 hours ago
Nailed it. View
News 2

Robyne Mitchell - 3 hours ago
How many years have they been promising this? View
News 13

JS9 - 4 hours ago
True, but it should also be remembered that prior to the government taking a relatively extraordinary step of legislating to... View
Opinion 63

Steven Campbell - 4 hours ago
Reducing posted speed limit is simply government’s way of running away from their responsibilities. Laws are only as effect... View
Opinion 73

Capital Retro - 4 hours ago
Spot on. What goes on behind the scenes is usually at odds with the "clean & green" propaganda we hear. Just like a wind "far... View
Opinion 11

George Watling - 12 hours ago
These multi title trojan horses are cropping up all over Canberra. Developers are trying it on in Holder and Weston and other... View
Opinion 94

George Watling - 12 hours ago
Marc Edwards Spot on Marc. The best way to deal with congestion is decentralize workplaces. If everyone is travelling to a ce... View
show more show less
*Results are based on activity within last 7 days

@The_RiotACT @The_RiotACT
Canberra's nurse of the year has been named. Find out how she and her team stood tall as the Weston Creek Walk-In Centre became our frontline during the COVID-19 pandemic https://t.co/KgHd7NHC9V (30 minutes ago)

@The_RiotACT @The_RiotACT
Captains Flat Road will get a much-needed $10 million upgrade over the next four years as part of a capital works program in the Queanbeyan-Palerang area https://t.co/2zPIjg1tc5 (4 hours ago)