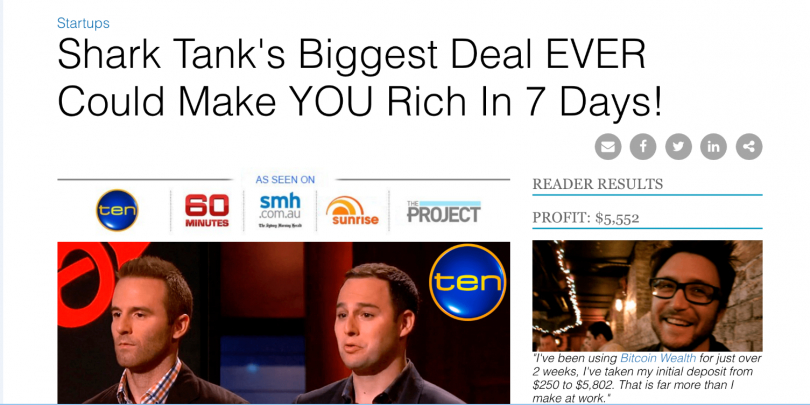 An example of one of the scam advertisements showing a fake endorsement from the ‘Shark Tank’. Image supplied by Scamwatch.

Canberrans are among the growing number of Australians falling victim to celebrity endorsement scams trading off the names of people like Cate Blanchett, Oprah, Meghan Markle and Steve Baxter from the TV show ‘Shark Tank’.

So far this year, four Canberrans have reported being caught up in these scams but a Scamwatch spokesperson said the real numbers are likely to be much higher as victims don’t always let them know.

Nationwide, reports to the ACCC’s Scamwatch website by victims of celebrity endorsement scams have increased 400 per cent in 2018, with losses increasing by a staggering 3,800 per cent.

According to Scamwatch, the scams often appear as online advertisements or promotional stories on social media or a seemingly legitimate, trustworthy website.

They include fictitious quotes and doctored or out-of-context images of the celebrity, such as presenters from ‘Shark Tank’ promoting a product such as skin care creams, weight loss pills, or investment schemes.

To date in 2018, the Scamwatch website has received almost 200 reports from victims of the scams, with losses totalling more than $142,000.

Women are more likely than men to be victims of the scams, and people aged 45 and older accounted for 63 per cent of losses.

“The growth in these scams is very concerning, particularly as over half the reports we received included a financial loss,” said ACCC Deputy Chair Delia Rickard.

“Most people lost between $100 and $500 and in one case, a victim lost more than $50,000 through fake celebrity endorsement of an investment scheme.” 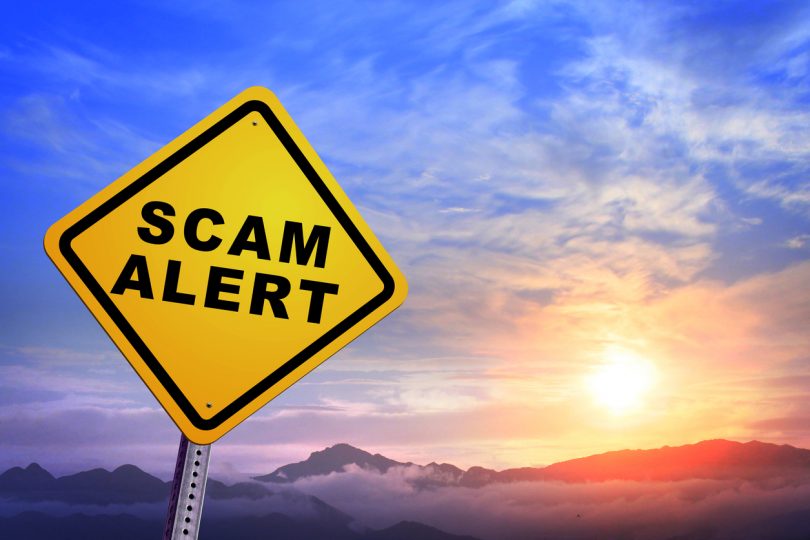 Scamwatch is concerned about the growing number of people falling victim to celebrity endorsement scams.

According to Scamwatch, the scam works by consumers signing up for a ‘free trial’ for a product. As part of this process, they have to provide their credit card details.

However, the ‘free trial’ has strict terms and conditions such as having to return the product within a near impossible timeframe, and an automatically renewing subscription that is difficult to cancel. These terms are often only visible on the document that arrives with the product.

“The groups behind these celebrity endorsement scams are organised and sophisticated fraudsters who are often involved in other scams,” Ms Rickard said.

“It’s easy for them to create fake ads and websites to give credibility to their con, so people need to be very careful and sceptical about ads they read on social media and websites.

“It is vital to research and read independent reviews of the company. Consumers should verify celebrity endorsement of products from the celebrity’s official website or social media account.”

The ACCC is calling on Google, Facebook and Instagram to do more to crackdown on the fake ads to prevent scammers reaching potential victims.

“Most of the reports to Scamwatch involve these scam advertisements running on Google ad banners or as ads in Facebook news feeds,” Ms Rickard said.

“These tech giants must do more to quickly suspend ads, as every time consumers click on a scam ad, they are at risk of losing money.”

Ms Rickard said that anyone who gets caught up in one of the celebrity endorsement scams should call their bank immediately to try to arrange a chargeback and to stop any further debits to their credit card.

Below is a list of celebrities who have been used in celebrity endorsement scams based on reports to Scamwatch from members of the public.

For more advice on how to avoid or report scams visit www.scamwatch.gov.au.

chewy14 - 14 minutes ago
"A responsible and competent government would" Well there's your first problem. They haven't been forthcoming with robust bus... View
michael quirk - 2 hours ago
The government has yet to provide evidence to justify the light rail extension, the viability of which is tenuous given incre... View
News 115

Jay Annabel - 26 minutes ago
Ajay Cee ...... a drastically reduced number in 2020 because of covid lockdowns. View
Ajay Cee - 2 hours ago
Jay Annabel 36 in 2020. View
chewy14 - 2 hours ago
JC, Seeing as I've been the one quoting directly from the national plan, your memory seems a bit fuzzy. And I'm still waiting... View
News 1

Capital Retro - 34 minutes ago
The next step is to equip the ravens with lasers. Death to all drones!... View
Community 6

It looks like next year's federal election will be even more about keeping Australia safe. The Morrison Government will seek...
Best of Canberra 51

@The_RiotACT @The_RiotACT
A plastic surgery clinic and medical centres are among new exposure sites, and Calvary has confirmed a fully vaccinated aged-care staff member has tested positive https://t.co/RE8RHLqgTF (9 minutes ago)

@The_RiotACT @The_RiotACT
A new @ACOSS survey has revealed 85 per cent of income support recipients cannot access COVID-19 #Disaster Payments and are struggling to survive, including up to 20,000 #Canberrans https://t.co/0w2XlrG1qc (50 minutes ago)