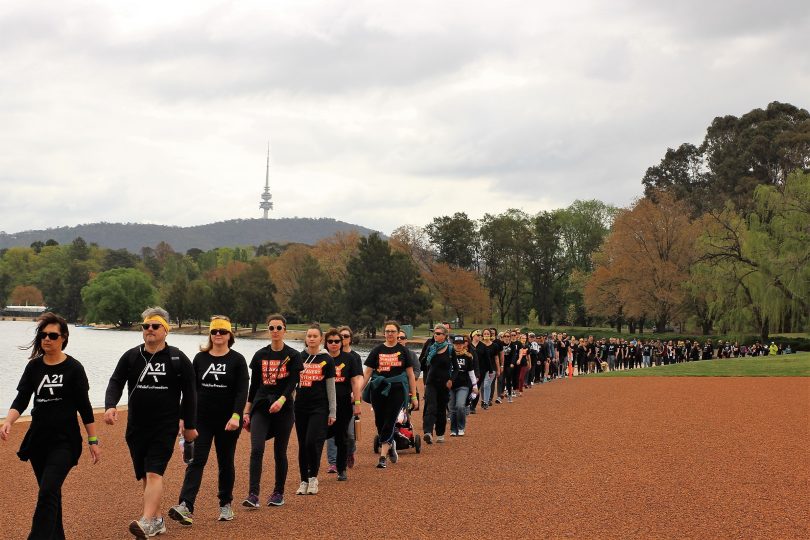 About 170 Canberrans walked around the lake to call for an end to modern-day slavery. Photo by Stephanie Horne.

About 170 Canberrans wearing black walked silently in single file around Lake Burley Griffin on Saturday afternoon to call for an end to modern-day slavery.

Organised by Fusion City Church in Palmerston, the walk was part of a worldwide movement, the A21 #WalkForFreedom, which aims “to raise awareness about the millions of men, women, and children who are still trapped in slavery today”.

The five-kilometre Canberra walk started at 2 pm at Queen Elizabeth Terrace and involved the bridge-to-bridge loop around Lake Burley Griffin. 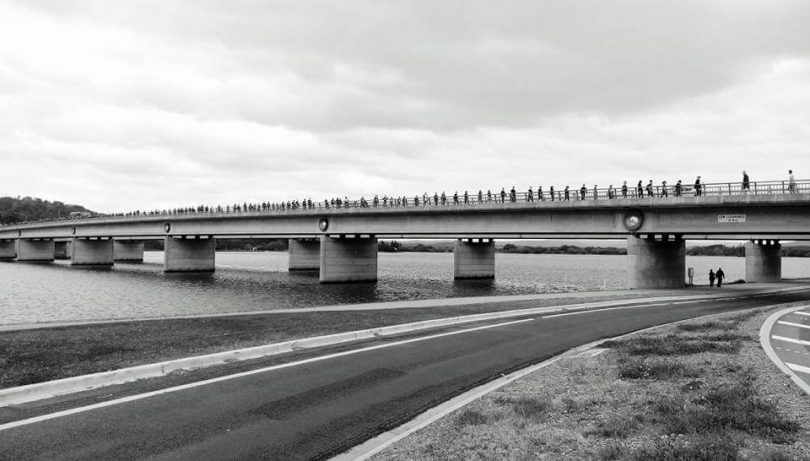 Walkers going across the bridge. Photo by Cameron Moore.

One of the organisers, Nicole Moore from Fusion City Church, said that they were pleased with the success of the event, which raised $3,000 to help victims of slavery and made a real impact on the city. 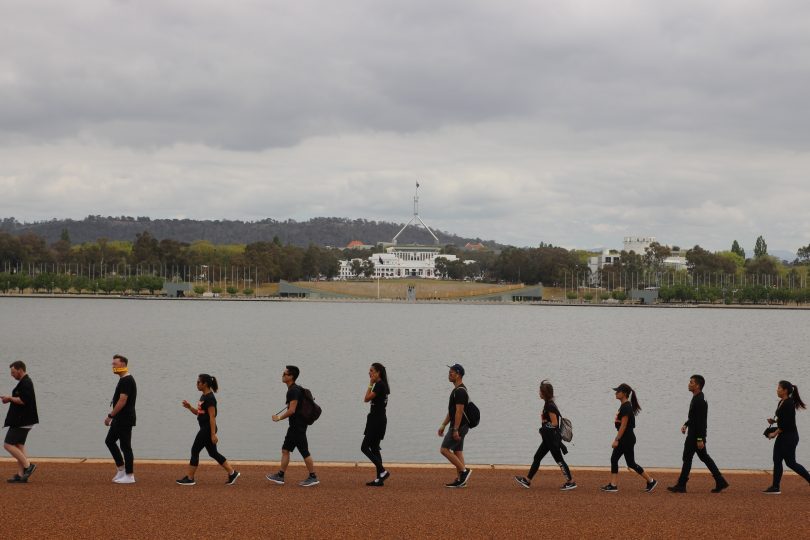 “Human trafficking and slavery is a real issue not only in the world but also right here in Canberra,” Ms Moore said.

“We have a responsibility to stand up for those whose freedoms have been taken away from them – to say it’s not okay. We have a voice so we should use it.” 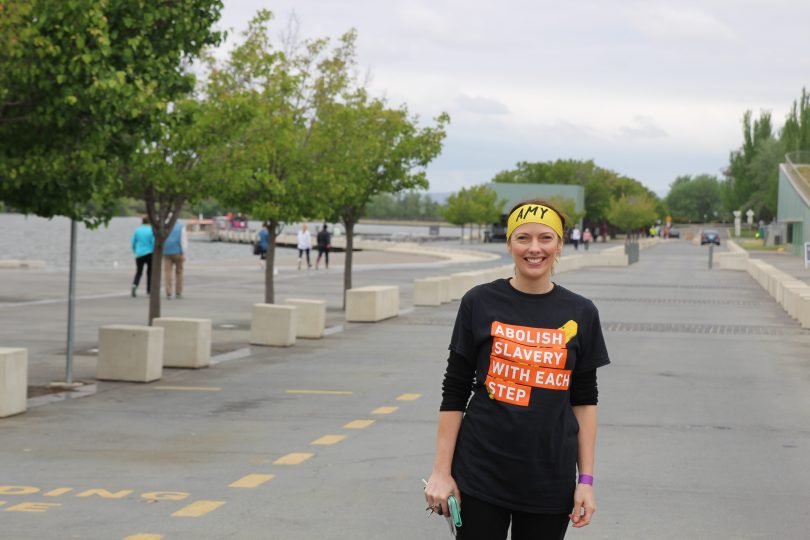 Nicole Moore was one of the organisers of Canberra’s Walk for Freedom. Photo by Stephanie Horne.

Ms Moore said it was the second year Fusion had run the walk in Canberra and the fourth time the walk has occurred globally.

“As we walked passed so many people attending Floriade we were able to spread the word on this important issue,” she said. 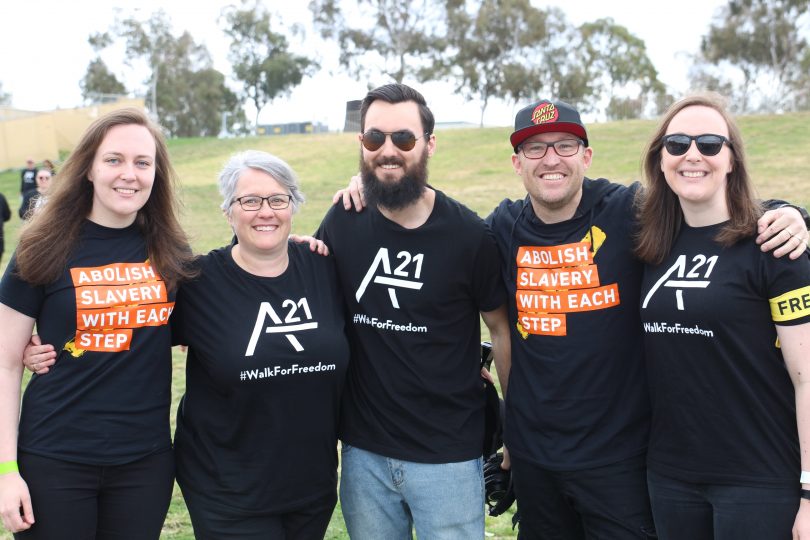 This year’s #WalkForFreedom took place in 400 cities across 50 nations, with single-file lines of people seen in landmark places all over the world – from in front of the Eiffel Tower in France to along the Hollywood Walk of Fame in America. 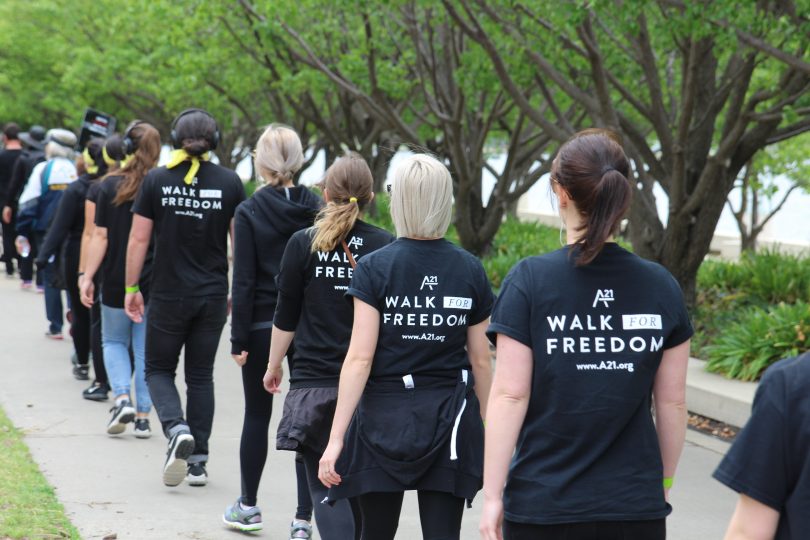 “We are utterly convinced that slavery can be eradicated in our lifetime,” said Christine Caine, the founder of A21, which is a global anti-human trafficking organisation.

“Walk For Freedom is definitely one of the most impacting things that we do at A21. It is a tangible, practical, and doable thing for every single person. All of us can put our feet on the pavement and use our steps to make a difference.”

Do you think modern-day slavery is an issue that needs more attention? Did you notice the walkers on Saturday and, if so, do you think the activity made an impact? Let us know your thoughts in the comments below.

Bill Gemmell - 13 minutes ago
I agree in the principle of charging the economic cost of providing a public place to park a private vehicle. But, just can't... View
Geoff Withers - 1 hour ago
Registration charges in the ACT should cover parking costs, its ridiculously high. View
Michael Roy - 1 hour ago
They really aren't, I would suggest reading "the high cost of free parking" by Donald Shoup. You can also read about demand b... View
Lifestyle 4

James Forge - 38 minutes ago
Ben Oostermeyer I agree. The usual excuses of transport costs and lack of competition don't wash when fuel that has to travel... View
Opinion 100

Redgum - 1 hour ago
Better Renting is correct on one point only. The decision to invest in a rental property is a business decision. Investments... View
News 10

kenbehrens - 2 hours ago
Government charges contribute towards the high cost of rent in Canberra. It's Government policy to increase Rates, to a level... View
Geoffrey Bell - 4 hours ago
Mandy Truman $206 cheapest share place i could find. https://www.allhomes.com.au/share/search?region=canberra-act&district=gr... View
Mandy Truman - 5 hours ago
I'm full time uni and I got made redundant from my job and then got a casual job but haven't had work for 10 weeks. I would h... View
News 246

Paul Kowal - 5 hours ago
Super impressed, Ashley, with the effort and fund you raised! Will keep an eye out for the next fundraiser. Kind regards, Pau... View
News 2

Tom Worthington - 5 hours ago
Thermal scanning at airports is not new. It was routine in Singapore, and China after SARS. My travelling companion set off t... View
show more show less
*Results are based on activity within last 7 days

@the_riotact @The_RiotACT
The machinery shed is the heart of every farm - it's also the inspiration for a new children's book by Binalong author Angela Taylor https://t.co/5Re2h7YwcX (17 minutes ago)

@the_riotact @The_RiotACT
Canberra #food blogger Alec Morris is encouraging more families to cook together with his colourful #pasta creations. And he finds #inspiration in some unlikely places! https://t.co/PDvKuqqLhz (1 hour ago)

@the_riotact @The_RiotACT
If you love golf, this family #home is close to the Gold Creek #golf course, with views over the #fairways and beyond. Give the huge 80s home a little spruce up, then relax on the balcony and watch the afternoon golfers tee-off https://t.co/sVglXTIFMt (2 hours ago)