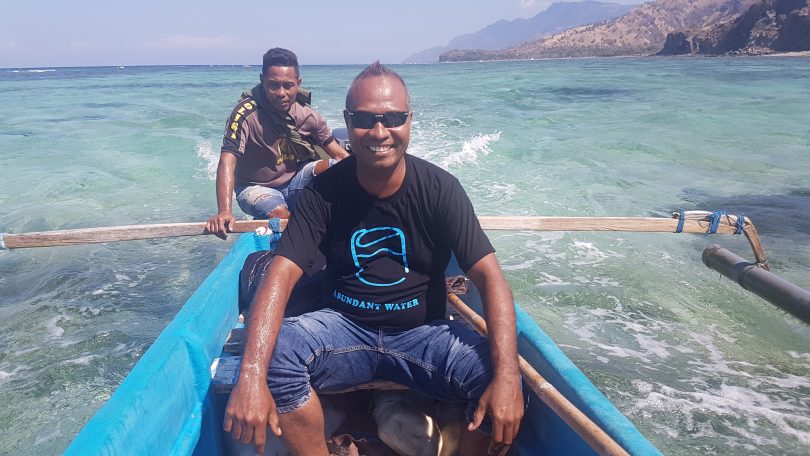 Canberra-based charity Abundant Water’s East Timor project has well and truly exceeded all expectations by providing more than 6,000 East Timorese with access to clean safe water in the two months since the project activated.

Abundant Water was created by Sunny Forsyth after he saw the need for accessible, safe water filters first-hand while working in Asia. Building on Abundant Water’s success in Laos and Cambodia, the organisation identified a need in East Timor in 2018.

“We learned that people in Timor were either buying or boiling all their water, which takes a lot of time and effort,” he says.

“People there took an immediate interest in the idea of low cost, effective water filters, so we put in some applications for funding with local Rotary clubs who have been instrumental to this project. They have been supporting us forever.

“We also got a DFAT Friendship Grant to expand the work. Our initial goal was to distribute 1000 filters in the first year but we had no idea how we were going to do it.” 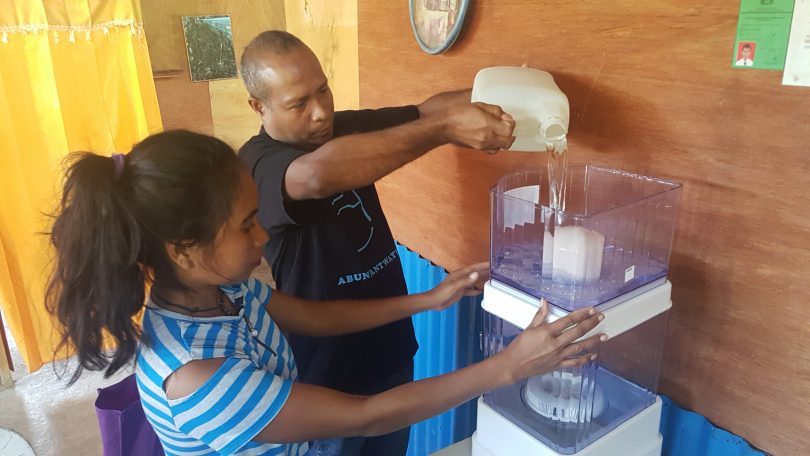 Establishing partnerships proved to be the key, chief among them was Fokupers, a Timor-wide women’s organisation that has built deep trust among local communities. The Catholic Church was another important partner. Working through schools has also proved very fruitful.

Abundant Water’s social business model revolves around providing cheap yet highly effective water filters through an established filter vendor network. The end game is financial sustainability for the water project rather than relying on donors for the bulk of the funding. 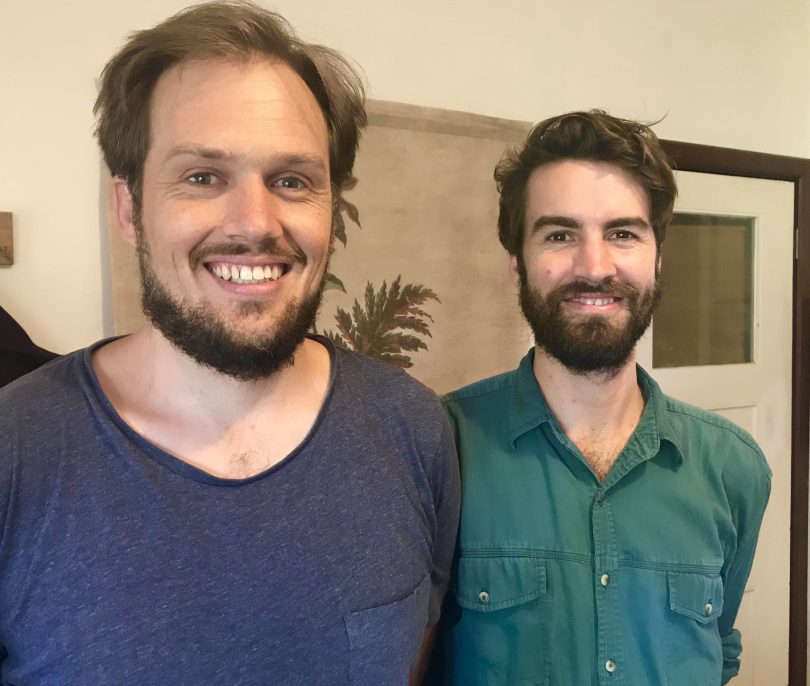 Tom O’Malley heads the project in Timor Leste. He quickly learned that he had to embrace a fast-moving and changeable environment.

He needed to get the filters on the ground, recruit vendors and train staff members and work through Fokupers and the local schools network to find motivated people who wanted to participate in the project. He says that happened remarkably quickly, although the project was new to everyone involved.

“We had some challenges with geographical distances, transportation and maintaining our networks in widespread areas. We needed to understand how people would market to customers and communicate with them, whether through word of mouth or social media, for those who had access to it,” O’Malley says. 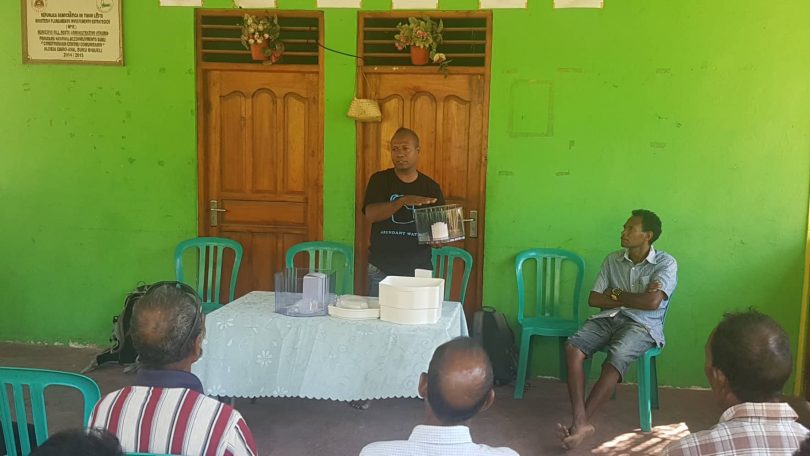 “We’re lucky that we found people who were very driven, which we cannot take credit for. These were people who would walk a few hours to make a sale, go into a strange village to demonstrate for them. To hear those stories was very encouraging.”

Tom says that freshwater impacts health, wellbeing, access to education and so many other markers for a healthy life.

“We did some evaluation following up with people on the effect of the filters. The most obvious one is that people don’t have upset tummies and they have a more convenient water source for children. But there are other consequences. We learned, for example, that women and children were vulnerable to assault while gathering firewood to boil their water.” 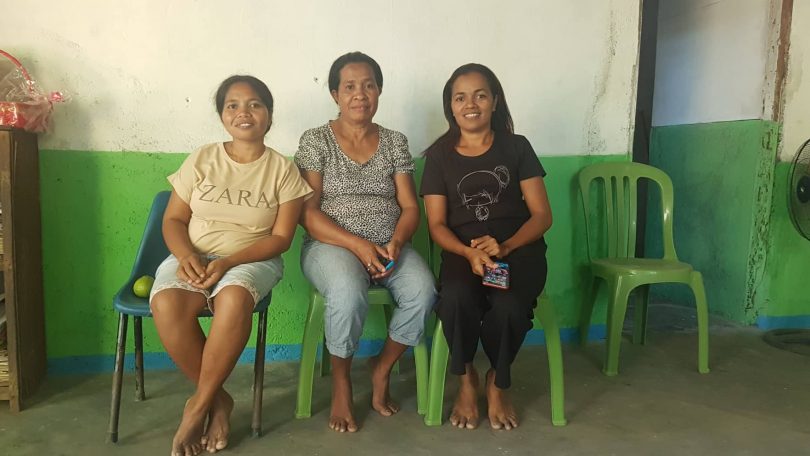 Ten water filter vendors are now operating in seven villages and 1000 filters have been distributed. Abundant Water calculates that each filter provides clean water for six people. The results also mean that they have reached their initial target for the year in under two months of active operations.

Sunny says that in the aid and NGO worlds, it’s not uncommon to be explaining to donors why a project hasn’t turned out exactly as forecast. Not this time.

“We very quickly saw highly motivated local vendors and social media uptake. People were ready to make these decisions because they could see the value immediately.”

They’ve been able to make a very satisfying report back to DFAT, and have secured a further grant from Australian Ethical Investment to do more work in schools.

“It’s an exciting time”, says Sunny. “We are at the edge of true sustainability where local sales fund the project. We’ll still need the donors, but we are genuinely moving towards ongoing viability for the project”.

Julie Marshall - 14 minutes ago
After the fight ppl did so McDonald’s couldn’t get it you have now dropped the fence ;(... View
Christine Cole - 3 hours ago
Yes it is Sharon Merten. Big and long fight. Proud of their resilience and determination. Also proud of making a big decision... View
Tori Hyde - 5 hours ago
So very sorry to see this great place close. Best schnitzels and cutlets around. View
Opinion 27

Peter Hislop - 7 hours ago
Unfortunately state and territory governments can only heed medical advice about risk/benefit of each change up or down. Feds... View
Sher Bee - 12 hours ago
Temporary benefits for the fully vaccinated would be a nice step. As key percentages are reached the benefits can be expanded... View
Community 14

Anthony Beck - 8 hours ago
Why can some training companies continue face to face training, and in a classroom environment, but transport training cannot... View
kenbehrens - 9 hours ago
Roy, I've always been concerned about the active type of exerciser. The runner, the cyclist etc and how that type of activity... View
Kari James - 9 hours ago
I would find this job incredibly difficult and stressful - great work team! View
News 22

chewy14 - 10 hours ago
Yeah, almost none of what you just said is true. The Astra Zeneca vaccine is extremely safe and equally as effective as Pfize... View
skipper - 11 hours ago
Barr only cares about his own political profile, not his citizens. Three states have opened up eligibility to Pfizer for over... View
News 5

Capital Retro - 11 hours ago
The headline in the first link it totally misleading. The proposed legislation says it will be a requirement for every new ho... View
Property 2

@The_RiotACT @The_RiotACT
The @NFSAonline has unearthed a rare recording of a @ledzeppelin interview that features in a new documentary on the legendary rock band https://t.co/YSn9EwPTIR (8 hours ago)