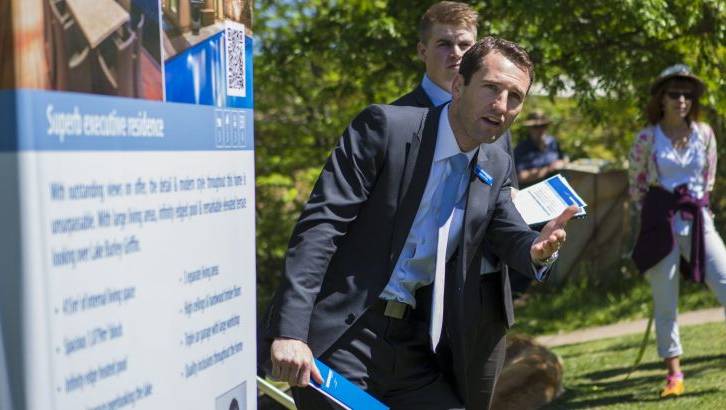 Canberra suffered the largest fall in house prices in the country during the March quarter, according to the latest research from the Real Estate Institute of Australia, but the cooling off has been seen as a good thing for the market. The REIA Real Estate Market Facts for the March quarter found that the median house price across Australian capital cities had declined by 0.1 per cent at $770,086 for houses and 0.2 per cent at $593,183 for units, led by Sydney and Brisbane.

In Sydney the median house price decreased to $1,150,357, a fall of 2.6 per cent over the quarter and a decrease of 1.4 per cent over the previous year, but Melbourne and Hobart, in particular had strong growth.

Independent Property Group, Agent, auctioneer and agent Mark Larmer said the decline in house prices in Canberra meant the market was stabilising after runaway growth over the past six to 12 months.

“It’s an excellent thing. Buyers have more opportunity to buy, there is a little less pressure on them. Sellers still need to be reminded they’re getting very good prices,” he said.

Mr Larmer, who has observed lower clearance rates in recent times, said the house market was not declining as such, it was just not growing at the same rate as before.

With clearance rates down to 60 per cent from highs of 80 or 85 per cent, there were more opportunities to buy post-auction although supply was relatively low for houses.

“There has been a lot of growth and buyers aren’t prepared to keep paying a premium and keep pushing that growth and that’s why we’re seeing values stabilising,” Mr Larmer said.

Investors had not deserted the market, with Mr Larmer seeing more activity, although it had been mainly directed at units where there was more supply and returns were greater.

Principal, Peter Blackshaw Real Estate City & Inner North, Tony Trpeski said that while the market wasn’t ‘crazy’ like it had been, there was still strong growth.

In fact, the REIA data was not being reflected in what he was seeing on the ground.

Clearance rates were stable, he was still seeing good numbers at inspections and inquiries were strong.

However, bidder registrations were slightly less than 12 months ago and finance was starting get a little harder for some people. And then there was the traditional winter slowdown.

“But we’ve got a good strong pipeline, sellers are getting their properties ready now to come on to the market in September and October,” he said.

“We are recommending that some of our sellers go to market early and were talking August rather than September to be in the market without too much competition.”

Mr Trpeski said the market would vary from area to area with Canberra now big enough to support sub-markets.

He said the focus should not always be on solely on growth.

“If you’re buying to see increase year on year don’t think of it that way, buy it for the reasons you want to buy it … Most people live in a property for seven to 10 years so over a period of that time traditionally you’ll get growth,” he said.

The REIA also found the rental market had tightened nationally but particularly in Canberra which now had the lowest vacancy rate in the country.

Here is an extract to consider released today from another national industry adviser:

“Overall Canberra finds itself in a good position as the calendar turns over to June 2018, with the residential housing market in safe hands fostered by strong demand, increased population and stable market sentiment in the core product.
The residential unit market has also crossed over into the second half of 2018 as a winner, of sorts, with low vacancy rates returning good rents for investors and new stock seemingly mopped up by the steady flow of new residents into the market.
Heading towards the end of the year, recent hindsight tells us that Canberra’s housing market will remain solid in demand, growth and new supply.
The unit market, however, will be one to watch, with further new stock to be added to the supply line by year’s end. If current absorption rates backed by good population growth continue, the market will cap off what has been a good year for unit developments.”

This report only covers houses. Why have they not reported on home units? Is that because that is where the real damage is?

Nevertheless, a local real estate manager still salvaged the statement that it is “an opportune time to buy”.