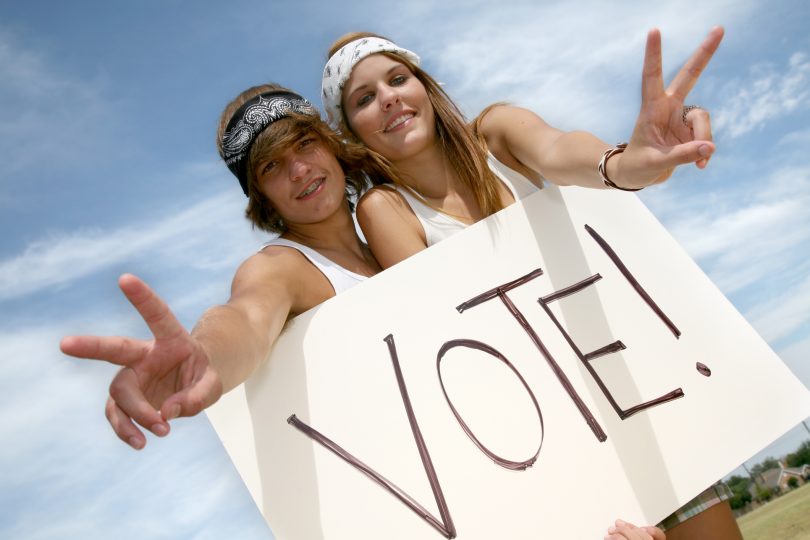 How will the ACT’s young voters cast their vote during this election?

With the closing of the electoral roll last week, the Australian Electoral Commission (AEC) has announced that the next Federal election will see a record number of Australians casting a vote. The AEC has reported that that 96.8 per cent of eligible Australian voters are now enrolled to vote. Here in the ACT, we have almost 300,000 enrolled to vote, which represents a whopping 99.2 per cent of people eligible to vote on the electoral roll – the highest in the country.

This includes a large number of younger voters. While there is a common perception that young people are disengaged and disinterested in politics, young people’s enrolment patterns are challenging this notion. Across Australia in anticipation of this next election, 88.8 per cent of young people aged between 18 and 25 have enrolled to vote. This is much higher than the AEC target of 80 per cent. It is also higher than the previous benchmark of 88.6% per cent that was achieved in the lead up to the marriage equality vote. This mirrors the finding of a recent Australia-wide survey of young people conducted by triple j found that while young people have little faith in politicians, they care about politics.

In the ACT, 33,791 people aged between 18 and 24 years of age have enrolled and will be required to cast a vote on the 18 May. This is 11 per cent of eligible voters, or one in nine voters, in the ACT. This means that this group of voters is going to make an impact – both here in our local seats as well as nationally.

This is the first time that Post-Millennials (people born in 2000 and after) will be able to vote in a federal election. Some of the recent election debates and discussion bring into question whether or not some of our current crop of politicians have cottoned on that young people are such a large proportion of voters and what this will mean for the Federal election.

The question is whether or not the voting patterns of this younger generation will be very different to other age cohorts. The Triple j survey found that only a little over 20 per cent of young people vote the same way as their parents. It also found that the top issues for young people in priority order were the environment and climate change, health, mental health, education and housing.

Early results from the ABC Vote Compass Survey suggests that whether you are young, old or in between, there has been a massive increase in the concern for the environment. Across the board, this has risen from 9 per cent in 2016 to 29 per cent in 2019. Here is the ACT, it is also the number one priority issue for ACT-based voters who have taken the survey and is rated more highly than elsewhere in the country. This also aligns with people intending to vote either Labor or Greens. It is out of step, however, with general Coalition voters who have taken the survey that rate the economy as the priority issue.

We know that compulsory voting makes a huge difference to democracy in this country. While voter satisfaction in the performance of our politicians is arguably at an all-time low, there remains a strong consensus that compulsory voting makes our democracy stronger. What our shifting demographics mean for the state of politics here in Australia, is something we might know more about on 19 May 2019. It is also interesting to reflect on what would happen if 16 and 17-year-olds were able to vote – a proposal that has been recently discussed in Federal Parliament.

I am excited to see that young people are engaged and participating in our upcoming federal election. What are the key issues that you will be thinking about when you cast your vote in the Federal Election?

Rebecca Vassarotti is an active member of the ACT Greens. She was a candidate in the 2016 Territory Election.

Marc Blackmore - 38 minutes ago
Assid Uous if you think the issue can be solved with out increasing supply good luck 🤷‍♂️.... View
Assid Uous - 2 hours ago
Marc Blackmore While supply is certainly one of the key considerations, suggesting it is the only lever or factor at play her... View
assiduous - 2 hours ago
Are you trying to imply the ACT government has no control over the rate of land release and social housing stock by character... View
Sport 9

enjayjay - 44 minutes ago
Have you been there? Its would have more participation than ANY other sport in the ACT - every single day - not just weekends... View
enjayjay - 57 minutes ago
Have you even been there? Thousands of people use it every day. It draws people from all over australia and contributes milli... View
fridgemagnet - 1 hour ago
"these people" are anyone in the community. It is a mixed use recreation venue, runners, walkers, horse riders, road and moun... View
News 245

willondah - 4 hours ago
Totally totally agree. Always several steps behind; always reactive. If it wasn't for Perrottet we would have been hunkered d... View
JS9 - 14 hours ago
Any actual evidence to support a claim of a 'mass exodus' to Queanbeyan to shop? There must have been some either exceptional... View
News 41

@the_riotact @The_RiotACT
With 87 per cent of territorians in support of voluntary assisted #dying, Member for Fenner @ALeighMP says the time for enabling #right-to-die legislation in the ACT is now https://t.co/QsWxm1jVv5 (30 minutes ago)

@the_riotact @The_RiotACT
Filled up lately? If it seemed a bit more #expensive than usual, you're right. Canberra #petrol prices are starting to climb, but they're still way below Sydney, Melbourne and Brisbane https://t.co/k8rDN6AkHA (2 hours ago)