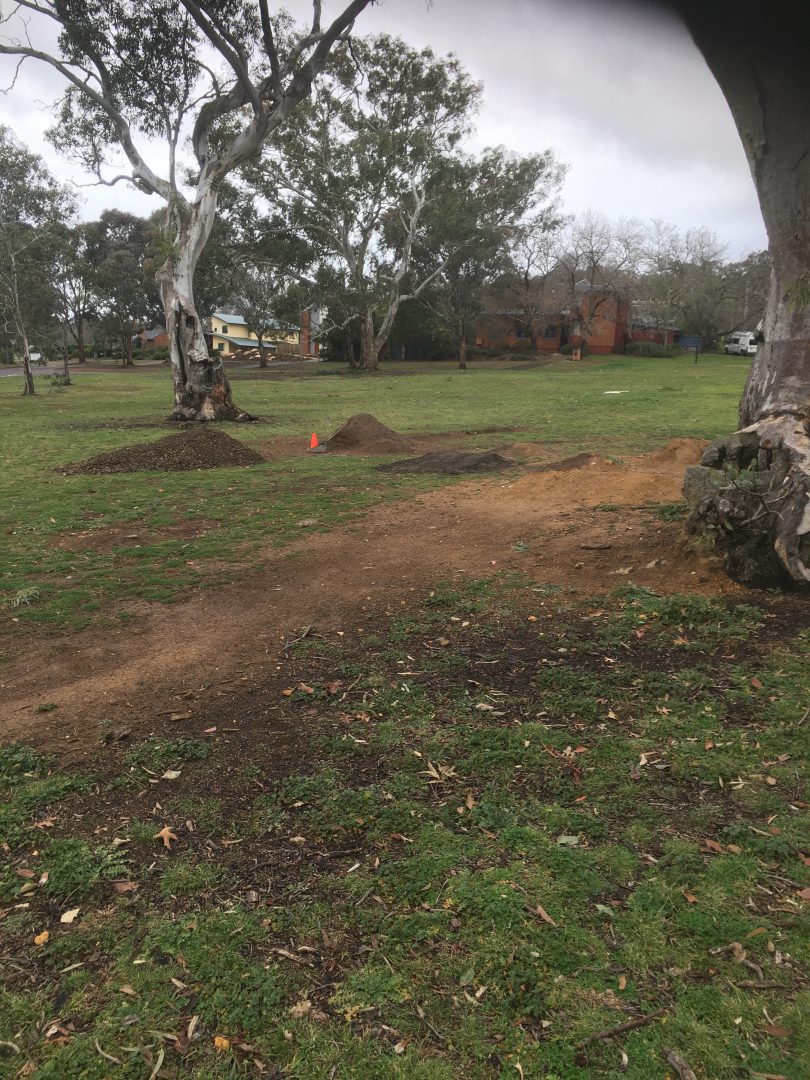 For months during the COVID-19 shutdown, I have seen local kids in and around Duffy Street in Ainslie industriously build their own sports facility in the neighbouring park.

The dirt mounds that are the foundation of their bike jumps were built by carting dirt in wheelbarrows from a neighbour’s front yard. Effectively they have created their own mini BMX circuit. The park is large with expanses of grassy areas, dotted with some native trees.

The construction does not impede people who wish to walk through the park to Mount Ainslie. They were diligent and hard-working in their construction, which took a considerable amount of time and effort. Once completed, it has proved to be popular with many young people in the neighbourhood. 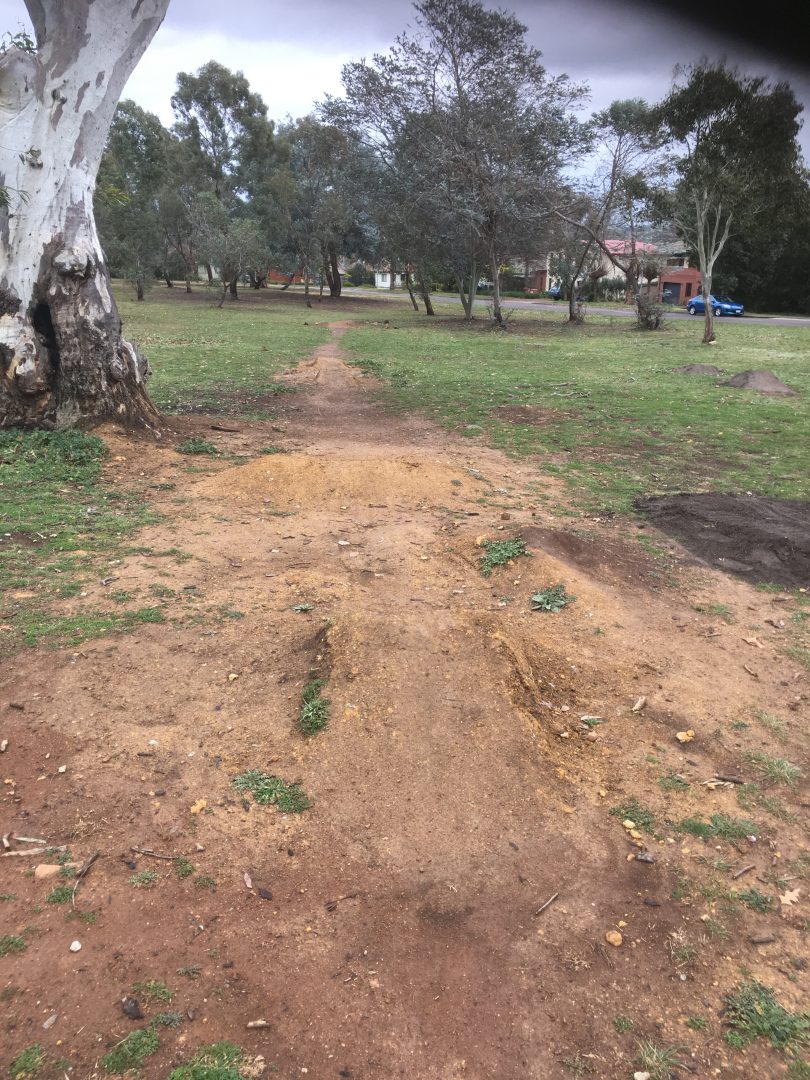 Up close to the threatened dirt construction.

If nothing else, COVID-19 has forced kids who would normally be involved in organised sport or some form of organised activity to be innovative. More stick houses and bike jumps have appeared in the nature parks as people flock to natural areas during the COVID-19 period.

The bushland around Canberra has become a gymnasium with people jumping over fallen trees, doing press-ups against trees or simply walking or running.

The creation and building of their own sports facilities such as the BMX track in Ainslie takes it a step further and it’s exactly what we want our kids to be doing.

It is what we used to do as kids. Growing up on a farm it was second nature to create something outdoors. Rarely did we want to spend time inside and only did so when it became dark.

We used to build rafts to float down the river or build houses made of sticks or construct ramps to jump our bikes over.

You don’t see much of it these days for a number of reasons, including the risk of injury.

Another factor has, of course, been the advent of computers and gaming, which has become a surrogate for creating your own adventure. With computers you don’t even have to leave your own lounge room, or in the case of teenagers, bedrooms.

For a few months, COVID-19 seemed to change all that as families flocked to the nature parks to exercise in the absence of organised sport. There was a desire to get out of the house.

On Friday the kids involved in building the bike circuit in Ainslie were door knocking, asking residents to sign a petition to stop the ACT Government from knocking down their homemade facility.

I signed it, while at the same time wondering what section of the ACT Government would be responsible for taking such action and what would be the reason behind it.

Before we head into a mini version of The Castle, there are perhaps some legitimate reasons for a land management authority to take action against the dirt mound construction.

Is it the danger posed to those using the track?

If an individual became injured because of dirt mounds in a park, would they sue the ACT Government because it is on their land?

Or is there another issue? Is it considered an unauthorised structure built without the proper planning approval? Is it an aesthetic problem, impacting on the visual of the park?

It could be all of the above.

It could also be a microcosm of what we have become as a litigious, risk-averse society.

I was fortunate when I grew up to be able to use the ditches and humps along with tracks in the local woods as a fantastic cycle track and obstacle course. These children must be supported in their enterprise and adrenaline rising sporting activities as it keeps them healthy, occupied, interested in making and doing things for their betterment. ACT get your act together and support them. If like me, they will remember the fun well into their 70’s. 🚴🏻🇬🇧👴

Watson has one to but the kids there carry knives lol

Funny how this is an issue but you look at some of the so called ovals around our town and the terrible condition they are in, I wish our government would do something to fix those. Evatt and Lyneham ovals are two excellent examples.

Get rid of self-government and bring back the national capital development commission. i think it was much freer in the 1970s compared to now.

Gabi Colin legit watched this unfold the other day

These little tracks are all over Canberra - mostly hidden. Kids just having fun.

Oliver Pulsford no fun for kids these days

They did the same, maybe around 12-14 yrs ago, to some jumps we made in collins park. 😞

Come on people use your brains. They will knock it down because if a kid hurts themselves, their idiot parents will sue. The government feels it necessary to eliminate liabilty

Hi Dave. Lititgation is a real but small possibility. A simple sign saying, "Ride at your own risk" should address most of that.

How about the government build a pump track there. Same as a skate park

Hi Juan. Part of the beauty of this project has been the relationships built in the community. It's as much about that as the jumps themselves.

I am all for these neighborhood tracks, but you can guarantee someone will hurt themselves, hire a smart lawyer and sue the government. Cannot blame the ACT Gov for closing them down.

No. It might happen, someone might sue, but it's actually more likely not to happen. These jumps are much less dangerous than many other sites around Canberra. A simple sign along the lines of "Ride at your own risk" should cover it.

We built bmx tracks as kids in Tuggeranong. They were regularly bulldozed. Nothing new.

We had one on Mt. Rogers as a kid. Was awesome, taught me some great skills and challenged me to be fit and healthy. 🤔

I don't have a Problem as Kids need to be Adventurous but if they were to be injured who pays the Hospital bill.

Hi Garry. Same as who pays the bill when anyone gets injured: All of us. We pay a Medicare levy.

These home made tracks are great for neighbourhoods. Kids come together, make new friends and gain high self esteem from helping and creating something.

Garry Peadon precisely why the act government would want to demolish it....

Helen Goddard - 8 minutes ago
Read the article ... that's not the story at all. These people had, like politicians, agreed to isolate for the mandated 14 d... View
Anne Cahill Lambert - 28 minutes ago
We had already agreed to self isolate for 14 days - same as politicians! Except we wouldn't be allowed out to Parliament Hous... View
Anne Cahill Lambert - 29 minutes ago
I've been in NE Victoria where there is no Covid. We go straight into isolation if/when we get home.... View
Sport 11

Chooky Whittaker - 55 minutes ago
Maria Hawke make sure you show all of these comments to dad ❤️ View
Mark Mcconnell - 2 hours ago
Living legend 👍👏💯 View
Erkin Esen - 6 hours ago
Great story , Allen and Maria most beautiful people i ever know ,... View
Community 13

HiddenDragon - 20 hours ago
Following on from the useful perspectives set out in Julie Macklin's comments last night, there are serious traffic issues at... View
show more show less
*Results are based on activity within last 7 days

Against the odds: Canberra’s gritty sports stars of 2018