Its a cold start to the week in Canberra and there isn’t a better time to start reaching for the heavier reds. Because of my love for shiraz I have chosen the 2008 d’Arenberg Dead Arm Shiraz, Wow! Last Week I was in McLaren Vale and I visited the d’Arenberg winery which is an icon in the district. D’Arenberg was established in 1912 and their Dead Arm is their Flagship Shiraz.

Dead Arm is a affiliate that effects old vines and is caused by the Fungus Eutypa Lata. It slowly reduces one half or arm of the vine to dead wood. What that does is send all of the that powerful flavor to only half the fruit, resulting in an amazingly concentrated wine. Its no wonder James Halliday gave it 96/100 when he reviewed it!

The Dead Arm shows spicy characters with touches of chacuterie which goes well with what im eating for lunch today which is Puppadelle Con Agrello, a perfect match for slow braised lamb shoulder.

The 2008 Dead Arm is drinking well now but has the potential to cellar nicely for another 12 years. The 2008 Dead arm Shiraz is available in select Canberra restaurants by the glass that use the Enomatic wine system.

Carlo Toslini is our newest RiotACT contributor. Carlo is a well known Canberran business man who has a great love of wine and food. He owns the institutional Tosolinis restaurant. 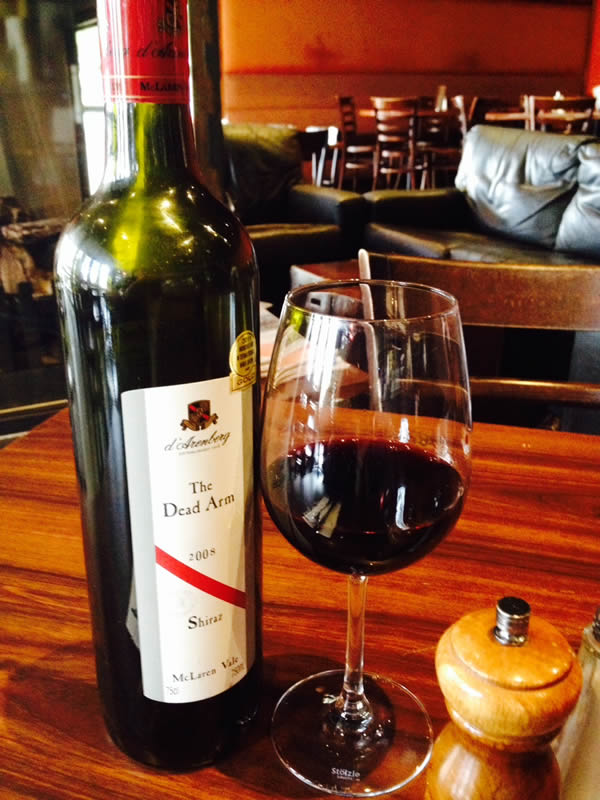 Chris Pye - 45 minutes ago
Yes!!!! There is still some good in the world! Absolutely wrapped for Pauly and Bruiser 👊 View
Sharon Allan - 2 hours ago
Such great news Paul glad bruiser and u will b reunited soon 🐕🥰 View
Sarah Marchetti - 2 hours ago
This is such great news ❤️ View
Community 26

Jorge Gatica - 2 hours ago
Ingrid Decak they should have started much earlier View
planet42 - 3 hours ago
Don't know why the trees have to be 'removed'. Can't they just cut them down and leave them there on the forest floor to brea... View
Ingrid Decak - 6 hours ago
Would you rather see dead trees falling on cars as they drive down the highway? View
News 15

Janette Hugs - 3 hours ago
I’m on DSP and recently moved to Canberra. I’ve only once driven through Civic in December. Since then due to circumstanc... View
countach - 5 hours ago
I think it's unfair that you can be a 15+ over the limit, super speeder hooligan for doing what was legal a month ago. Either... View
countach - 5 hours ago
Funny how a month ago it wasn't endangering, but now it is. Anyway, I agree to an extent. I got pinged for the first time in... View
News 8

Danielle Heffernan - 6 hours ago
Very well said Magistrate Cook. The 'problematic kids' are our society and they deserve to be protected.... View
show more show less
*Results are based on activity within last 7 days

A Canberra homeless man has been left traumatised and unable to sleep after his dog was impounded by Domestic Animal...
Community 87

A disabled parking spot outside Mawson Domino's pizza is the latest spark in an ongoing debate about roads and parking...
Community 87

@The_RiotACT @The_RiotACT
Get the party started with loads of local bands in this week's gig guide! Check with venues for cancellations before you go https://t.co/1X9jVWcsmv (49 minutes ago)