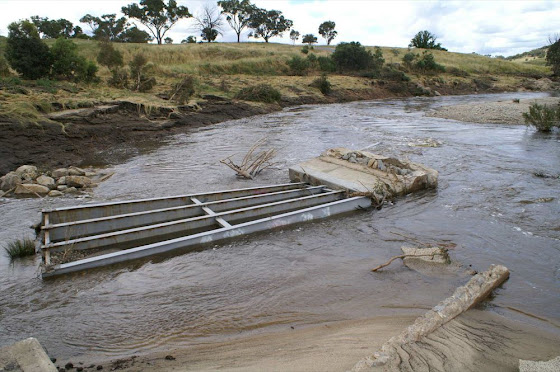 Jason has been out in parts southern checking out the damage to the Smiths Road bridge over the Gudgenby River.

Not having much to do, I scooted down to check out the Smiths Road bridge with a friend today. Please find an attached zip of the images we took. This may be worthy of a slide show of it’s own, as it is by far the worse destruction I’ve seen from these floods.

We arrived at Cuppacumbalong shearing shed and drove past signs warning that the road ahead was closed. We spotted the bridge, or remains there of before the final barrier. Whoa! The bridge is well and truely gone. We stood there inspecting it, deciding it was safe to walk on the end closest to us as we snapped some shots. Two sections of the bridge, and the middle upright have been pushed down the river about 10-15 metres. Someone has swung a rope over the bridge to allow a bucket for what we presume were essential supplies to be carried across.

It was only after staring at the spans from the side that I realised that the two spans have been flipped over up side down. It was the graffiti hat gave it away. It was upside down.

Rebuilding this bridge will be an major undertaking. Perhaps a longer single span will be needed, or one that is higher. It appears that a build up of wood on the upstream side dammed the river, and put the pressure on the bridge that caused its demise.

We then drove down to Sunshine road. The ends of the road that were washed away have been rebuilt today. While the crossing is under 40 cms of water, it is passable as demonstrated by the car in the last photo. Obviously a little hatchback would be washed away, but a 4 wheel drive should be right. Note the massive log left on top of a boulder by the crossing. It would have been under at least 2 metres of water.

UPDATE: We’ve also got a picture now of what it looked like before.

Wow! That looks like a pretty solid bridge, too!