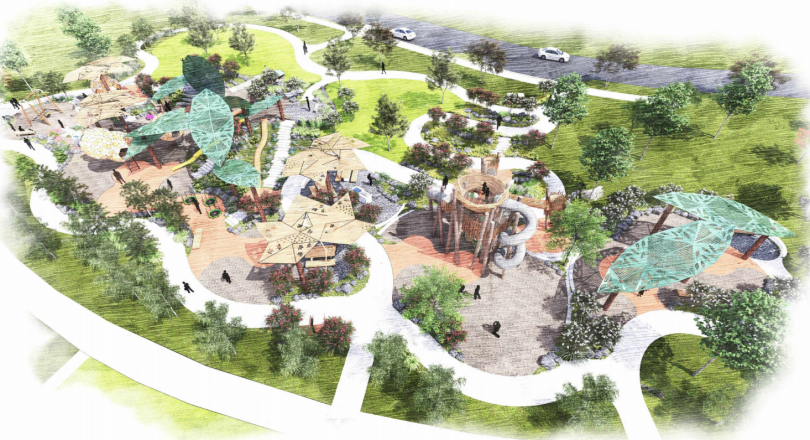 A design sketch of the proposed all-ages, adventure-style playground in Coombs. Image: SLA.

The Suburban Land Agency has released the final design sketches and details for a new playground by Holdens Creek Pond in Coombs, and the community is thrilled with the outcome after initial concerns about the size of the original proposal.

Gone is the toilet block and multi-sports court first proposed and there are fewer parking spaces, but the scale and size of the play equipment remains, although slightly relocated so it is less visible from nearby residences.

Residents, led by Alison Hutchison, had argued that the site was too small to support the original proposal and that the toilet block, which would have been 20 metres from homes, contravened the government’s own design rules.

It also would not have allowed spaces for seats around the edge of the pond. That area will now be landscaped and seating provided.

A barbecue and picnic tables will still be a part of the project, which will be an all-ages adventure-style playground in keeping with the site.

”We were wanting this play space to enhance the whole of the pond,” Ms Hutchinson said.

She praised the responsiveness of the SLA, particularly the Director of the Molonglo Development Simon Tennent and CEO John Dietz, and the consultant, Communication Link, which conducted the public consultation.

”The process was extremely valuable,” Ms Hutchison said. ”The SLA’s culture of wanting to get it right permeated this project.”

She also singled out Greens MLA Caroline Le Couteur for raising the issue in the Legislative Assembly. 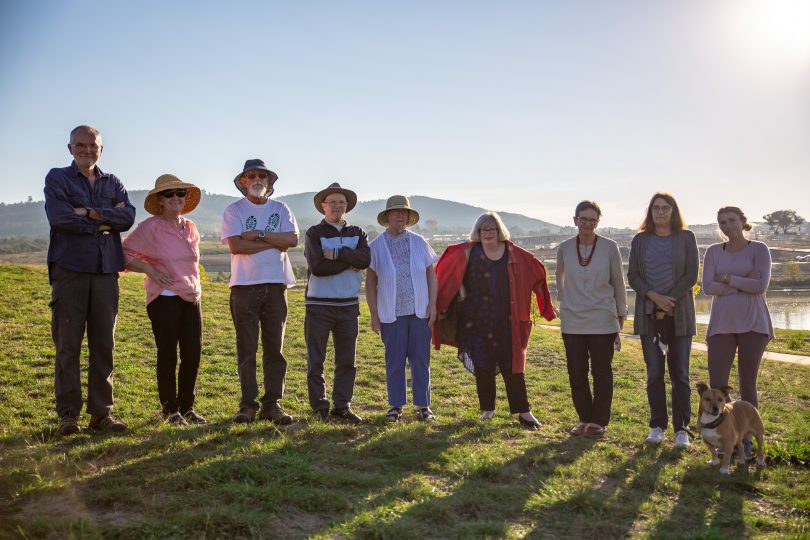 Parking has been cut to nine parallel spaces instead of the 20 to 30 proposed, including one for people with a disability.

The shade structures are designed like seasonal leaves and made of durable metal with perforations to allow air to circulate through.

A selection of trees and shrubs will be planted around and through the play space, with pond-side seating and shade provided.

“It is a stunningly designed playground that will enhance the location while taking into account the limitations of the site and complying with relevant standards,” Ms Hutchison said.

”This development provides an exciting play space for children and an attractive set of facilities in a great location that is already enjoyed by so many residents of Coombs.”

The SLA is also looking to collaborate with Canberra artists on elements within the play space.

Government approvals should be completed by December 2020, tendering and contract awarded by March 2021, and construction by November 2021.

Plans for the playground were first announced in 2016.

The final sketch plans can be viewed on the SLA website.

Who ever they are, I hope they look after play ground. From my observation the play ground in WRIGHT is not looked after. No garbage bin, rubbish to be seen, at least mowed the wheat every now and then.

No multi sports court. Another great outcome for Coombs 🤯

The design of this looks fabulous. However very concerning toilets are not included. Are 5 years old expected to wee on the grass? A playground of this magnificence will attract more than just the near neighbours who opposed the toilet block. I read the submissions and 54% of respondents said a toilet block was highly valued! This doesn’t make sense why it was taken out if majority see it as an asset to the area. I suspect the near neighbours are the ones pictured in the article who are jumping for joy and want to keep parents and children out of the area.

No toilet, but an unusual smell of urine present at all times?

Yep it will be awesome.

No toilets??? How stupid! You want families to be more active yet putting playgrounds in with no toilets is pure stupidity. There wasn’t (not sure now as I haven’t revisited purely for this reason) at the Denman Prospect one and a lot of parents I know who have gone there have said the same thing.

Sooo disappointed with the NO toilets. REALLY! Creates constant disappointment having to leave parks to go to the toilet.

Yes how dumb. Just like the great playground at Denman Prospect NO TOILETS !!!!

If only the government could get the shops at coombs in order. It’s only taken years of consistent failure. When will this type of infrastructure be pre-planned and not some afterthought after the suburb has been built?

Ugh. sorry I must have thought land and planning division were privately owned 🤭

How can you have a playground without toilets ?? – not fair to little kids !!

Do we have something like this in West Belconnen?
Where is it?

Small house blocks requiring big suburban parks for children to play in are not a good outcome for children’s health.
Parents are forced to supervise and as a consequence, time spent being active is limited and children spend less time involved in gross motor exercise.
Public parks, as nice as they are to have as additional places for the community to use, are no comparison to having you’re own tree to climb and yard to explore and be creative safely.

So everyone is thrilled it’s now smaller, has less parking, no toilet, and no multi sport court, really? 🤔

Oh yay great, ANOTHER Canberra playground situated by a waterbody. I bet there won’t be any gates or barriers to protect young children from drowning either, like so many other Canberran playgrounds -_-

Once again, the job of the government falls upon the parents!

“Hey, let’s take the kids to a park with no toilets!” said no parent, ever.

no toilet….. dumb as dog doodoo. Community around the park would be the only one jumping for joy…. epic park with no parking or toilets….. so dumb

Have I read that right that there are no toilets and parking for 9 cars, including one disability park? If so then that’s a real win for anyone who lives a short walk from the place, otherwise it’s what I would call a complete fail.

Natalee Gersbach oh yes. I suspect there was intense lobbying from local residents. But, to be fair, who can blame them? Who wants to live next to a park that you can’t take your kids to because it’s full of strangers (parking), has drug users and the homeless hanging around (toilets), or teenage gangs (multi-sport)?

It indeed looks like their main aim was to have this big playground all to themselves. And from looking at the photo of the residents who lobbied for those changes, it seems unlikely that most of them even have young kids?

I hope they don’t have teenagers either because they’re the most likely users of a sports court, I think.

But hey, there will be benches! (I do like benches.)

54% of respondents said a toilet was highly valued! Why is it being taken out? The near neighbours obviously put up that much of a fight to have parking reduced and amenities taken out. The whole Molonglo development lacks public toilets. They like the playground idea but want to limit access with lack of facilities.

It’s good they considered the disabled in the design brief. I think they could’ve emphasised indigenous and minority culture more.

So a destination playground without toilets. That sucks.

Hopefully the toddler area will be fully enclosed as it’s near water too.

I think you missed the bit about them wanting a park for them, but no one else. Less car parks and no toilets means it is really only of use for locals.