Over the weekend the comprehension impaired at the Canberra Times got very excited that US late night talk show host Craig Ferguson had apologised for his Canberra bashing.

Last night, in pretty good form, he explained that “a Canberra newspaper” had failed to understand him.

He suggests if we’re still offended we should concentrate on something else. Like trying to stop the larger Australian lesbian from sitting on the smaller one.

Craig and RiotACT on the same page now. 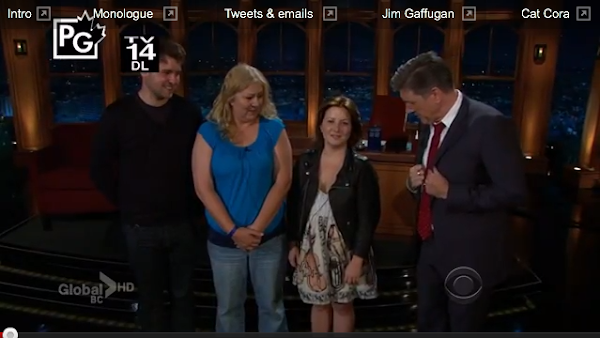 Agreed, though I think what gets most people in this city is that Canberra gets blamed for the decisions of the government they themselves elected. Most people knocking Canberra believe that all the politicians live in Canberra, and dont understand that Canberra is a territory not a state – and hence actually have the least amount of electoral representation by population of any state/territory …

isn’t he our energy minister? oh, hang on, that’s martin ferguson. sorry. are they related?

I vote for giving Ferguson the key to the city!

This is tiring. For such an up-and-coming comedian he has a very limited book of jokes ..

oh I dunno, an escalation of Craig Ferguson v. The Canberra Times would be a beautiful thing.

If Craig Ferguson comes to Canberra I volunteer to be ACT ambassador. We can play weeknight mixed netball against women who wear buns because they’re stressed about something a Minister wants. It’ll be amaiiizing.

Y’know, if The Simpsons poked fun at Canberra, we’d laugh and think we’d made it to the big time. If South Park combined Canberra with fart jokes, we’d laugh and say how cutting edge SP is. But the long running joke that is the alleged Ferguson poke at Canberra has stopped being a joke. If anything it’s only proven how humourless Canberra is, This should have died the day after the original swipe was broadcast. We should have laughed, said, “They don’t get it,” and went on with our lives. But somehow someone has conspired to to keep bringing it up like a dead dog rises to the surface of a lake, to the point that it’s now not that Canberra is a joke, but more that Canberra can’t take a joke. Enough is enough. Drop it.

Now it’s just the Canberra Times getting beaten up.

So it’s all gold where we’re standing!

Just ignore the silly man and he will go away. Stop feeding the rodents and minor/pseudo celebs with your attention and they too will disappear.
I am proud of my inability to recognise anyone on the front cover of any magazine or appearing as a “star” with whom an expert might dance or as a “celebrity” who wants to lose weight or not be fired. There are many better things to do, like clipping one’s toenails.

Oh my aching sides, the comprehension impaired local newspaper is trying to justify their flawed interpretation.

Hugo Walker - 7 minutes ago
Penny Ford But isn’t he rich, famous and self-entitled? Surely that should persuade the authorities to cave in to his tantr... View
Pia Kivela - 3 hours ago
Personally we are in a pandemic so we should not be having this tournament View
Milenko-Slavenka Jovanovic - 16 hours ago
Penny Ford Djoković is not just one of the other elite players, up to a few days ago, he was voted the players’ representa... View
Property 26

Ben Hall - 10 minutes ago
Lindy Hall we should buy this View
Mark Bradley - 22 minutes ago
Alison Procter the million dollar question. Or part thereof. :). Given we are not quite one year into a mortgage, there's not... View
Alison Procter - 25 minutes ago
Kara Youngentob how much each? View
News 29

Lisa LaMaitre - 34 minutes ago
No-one pays attention to crime in Canberra until it impacts them! We closed a Gungahlin based business over 10 years ago afte... View
Food & Wine 22

Colleen Alchin - 9 hours ago
This situation is appalling! Forty minutes from the national capital and you need to buy bottled water to drink and wash clot... View
Tegan Gilchrist - 16 hours ago
Amy LD and the clothes!!! Swapped out all out white sheets for greys. Blazer ruined. I now fill up bottles of water from my p... View
Community 1

Lifeline Canberra - 9 hours ago
We love Sarge! Thank you for continuing to support the vital work we do in the Canberra community. Bring on Jan 30! View
Opinion 19

Kim Rumble-Kozjak - 10 hours ago
Jacqleequack it was all good fun until the two hour wait in the cab line, in stilettos, without a jacket in -2 🥶❄️ View
News 6

dolphin - 19 hours ago
excellent news. will be good to have some community playing fields for Gungahlin.... View
News 22

Ben Keaney - 19 hours ago
Also if they are not in the numbers that the anti-brumbies say, what do you think a maximum brumby population should be? Sure... View
Ben Keaney - 20 hours ago
Di exactly how do brumbies keep the fuel load down? Do they eat fine forest fuels such as sticks and leaves? Or Perhaps its t... View
show more show less
*Results are based on activity within last 7 days

@The_RiotACT @The_RiotACT
Planning on hitting the beach? A hazardous surf warning has been issued for the South Coast, with waves up to three metres expected today & tomorrow https://t.co/F8pq5syJ8u (2 hours ago)

@The_RiotACT @The_RiotACT
The proponent of a mixed-use development says market conditions are behind its bid to replace approved commercial space with a motel https://t.co/lewxyB3HpN (3 hours ago)